'My family goes to the airport every day so that they can find a way out.' The Taliban killed her father in 2018. Now the fate of her mother and four younger sisters in Kabul lies at the mercy of the Taliban.

A month ago, a convoy of three armored vehicles came looking for her and her sister at her boutique in Kabul, leaving a chilling warning for both the social media influencers.

A warning that made them flee Afghanistan and now their return unknown, perhaps never to see her mother and young sisters.

Ayeda Shadab has more followers than Ashraf Ghani -- Afghanistan's president who fled Kabul the day the Taliban captured the Afghan capital -- and used Instagram and Tik Tok to promote her clothing brand. Ayeda.

After the success of her online store, she opened her boutique in March 2020 in the heart of Kabul, not too far from the airport.

Most of the pictures she posts on her social media accounts are of her promoting clothes of her brand, choosing various picturesque locations around Afghanistan.

The photo shoots in most cases showcase Afghan and Western attire and almost always bereft of a scarf or a hijaab.

Ayeda Shadab narrates her story on the phone to Rediff.com US Contributor Abhijit Masih:

I did my graduation in business from Malaysia and my MBA from China.

I started my online business when I was in China.

While studying there, I started designing Afghan clothes and also started promoting it on my social media handles.

I was trying to get something new which represented a mix of Afghan and Western culture.

We opened the physical store in Kabul in March last year.

It was going on well until the Taliban took over and it was shut down.

But we have opened it again and are selling only abayas.

Clothes are the least priority now as people don't have that much money to shop for clothes. Plus they cannot wear it and go out now.

There are a lot of restrictions on outfits now. So I don't know what's going to happen, but at least I can keep my brand alive, even though it is only selling abayas and hijaabs. The last twenty years before the Taliban took over this month -- while the news only shows the dark side, it was getting better.

Everyone had their freedom compared to twenty years ago under Taliban rule.

Everything was open -- restaurants, shops, shopping malls for men and women.

We could freely go anywhere anytime, and even late at night.

I myself have returned from my shop sometimes at one o'clock in the morning.

So, it was not that bad. The situation was getting better.

But suddenly overnight, all these things happened and everyone's life got destroyed.

Now we don't have hope anymore.

From the night the Taliban took control, I cannot sleep well.

It's not just about my business; it's all about the country, the people that are living there.

The people are trying to leave the country because they don't have any hope.

They are afraid of their safety, their life. My father was killed by the Taliban.

He was deputy governor in Logar province.

My mother and my four sisters, they are stuck in Kabul.

I and my sister are in social media and in fashion.

So in my family, we are all women. I don't have a brother.

We don't have sleep. We are stressed and we are really depressed.

My family goes to the airport every day so that they can find a way out.

There are talks that the airport will be closed on August 31, so they are so scared.

We are facing difficult times. I am trying to find asylum in any country, so that I can settle down somewhere and start again from zero.

Since I am active on social media and my family was in politics, our life is in great danger.

The Taliban does not allow women to work outside and here we were posting pictures without a scarf and wearing open clothes on social media.

If they catch us, they will kill us. I don't know what I should do and I don't know what's going to happen to my family who are stuck there because there is no support for them since we don't have a man in our family. A month back three bullet proof cars came to my shop and they said if they catch Ayeda and her sister, we will burn them both.

So me and my sister, we left the country thinking to go back when the situation improves.

But now the Taliban has taken over the country and we are stuck.

When I was small 20 years back, I remember the Taliban rule.

Once I accompanied my mother to get vegetables and she was wearing a burqa, but the Taliban beat her because she was out without a man.

It was not allowed for women to go out without a man.

But in the last 20 years life was getting back to normal.

People at least had work to do, whether it was a man or woman, they were working and could support their family.

But now there is no peace, perhaps no life even.

We can't predict anything about our future in Afghanistan.

We don't know whether we will have the right to even work or not.

We don't know what kind of rules and regulations the Taliban will bring.

But later on, they will do the same thing. IMAGE: Protestors hold a demonstration challenging the transparency of the evacuation process from Kabul airport near the White House, August 28, 2021. Photograph: Tom Brenner/Reuters

My mother told me they are coming to the houses searching for people that were working in the government, especially women.

So that means they are just investigating and collecting data and later on they will do the action.

I am scared as there are no flight to go out of Afghanistan.

I don't know what's going to happen with Afghanistan.

I'm just trying my best to take my family out before August 31, since they are all women.

I am just requesting any country from anywhere if they can help us out for asylum for me and my family.

It is not just about me, but we want them to actually stand and raise their voices for Afghanistan so that we will not have to live under the rule and regulation of the same Taliban, that everyone knows so very well. 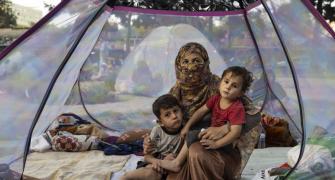 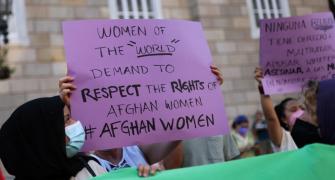 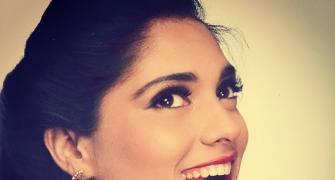 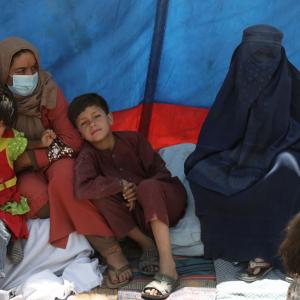