News
Business
Movies
Sports
Cricket
Get Ahead
Money Tips
Shopping
Sign in  |  Create a Rediffmail account
Rediff.com  » News » 'Arnab is a thought in the minds of people'

'Arnab is a thought in the minds of people'

'Physically, he is your boy next door, but attitude-wise, he is an evangelist who does not mind shouting from the rooftops to take a stand on a cause he believes in.'
Urvi Malvania on Brand Arnab.
Illustration: Uttam Ghosh/Rediff.com 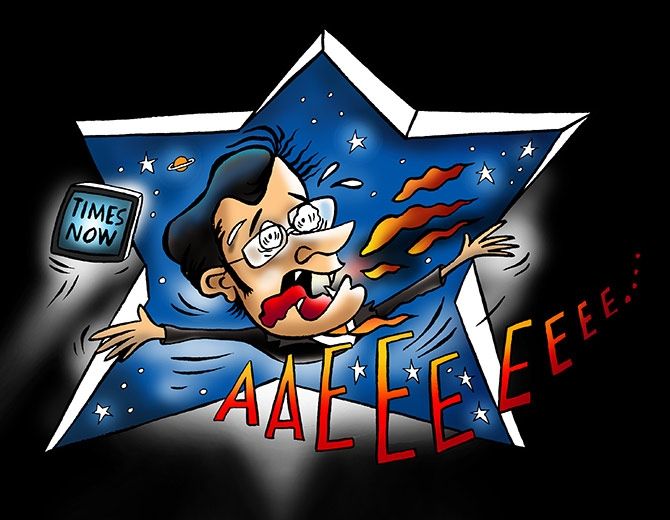 His show, The Newshour, has been the topic of many a tweet, joke and meme, mainly for the noise and heat generated in it.

In person though, Arnab Goswami, president-news and editor-in-chief, Times Now and ET Now, comes across as mellow and soft-spoken.

In an interview with Business Standard last year, Goswami had said that he is confident that content will eventually win, citing Times Now's viewership in the rural markets.

While he may have been soft-spoken, his confidence was unwavering.

"Our success and growth shows that it is investing in content that ultimately bears result, rather than changing the channel's name," he had said.

Nevertheless, many of his junior colleagues will tell you that he has a short fuse and little tolerance for slow workers.

One former colleague who worked with Times Now in Mumbai for nearly two years says that whenever Goswami saw that something on NDTV or CNN IBN wasn't showing on his channel, "he would emerge from his office roaring, 'You people are trying to ruin my channel.' And his voice would travel down the long corridor and past the offices of Zoom and ET Now."

In fact, a joke in the Times Network is that the punishment for someone who may have done a wrong story or any misdemeanor would be a couple of weeks of ticker duty for Goswami's shows.

Though he started his career in the print media, with the Kolkata based The Telegraph, Goswami made his mark in TV news.

His firebrand anchoring on The Newshour made him a household name and the show itself went a long way in pushing the channel to the number one position.

The 26/11 Mumbai terrorist attack in 2008 proved to be the turning point for him. Goswami set a record hosting news of the attack for over 65 hours. People sat up and took notice of him.

"His tone, of a vigilante, struck a chord with the nation shocked by the audacity and horror of the attack," says a colleague. That's the tone he continued to maintain ever since, for discussion on every subject.

According the Broadcast Audience Research Council India, Times Now is the top rated English news channel in the country by a massive margin.

The Goswami-led channel clocked 632,000 impressions in week 42 of 2016 (October 15 to October 21), while its closest competitor, CNN News18, clocked 289,000 impressions in the same week. (Impressions refer to the total number of views a show gets during its telecast).

The leadership position enjoyed by Times Now is also reflected in its advertising clout. On an average, English news channels enjoy a peak ad-rate (for a 10 second spot) of around Rs 3,000 during weekdays (prime time). '

Industry estimates peg Times Now's prime time ad-rate at around Rs 20,000. This could increase in case of an important development or during election time.

The show single-handedly helped Times Now become a money churning asset within the Times Network, contributing 70 per cent of the channel's total ad-revenue.

While the show became a staple for English news consumers, brand Goswami was also in the making. His success, of course, came with its share of criticism from observers and peers alike, but no one can deny that his persona commands attention, if nothing else.

"Goswami is definitely a brand. He is a thought in the minds of people, and a powerful one at that, whatever he does in the future, will be aided by this persona that has been consciously and painstakingly developed over the years. Physically, he is your boy next door, but attitude-wise, he is an evangelist who does not mind shouting from the rooftops to take a stand on a cause he believes in," says Harish Bijoor, brand domain expert and founder of Harish Bijoor Consults.

Bijoor adds that all the noise around Goswami, whether positive or negative, is now a part of the brand.

So every joke, every tweet and every meme that mentions Goswami has now added to the visibility of the man, and will continue to drive visibility for him, which is eventually a positive for any brand.

"However, anywhere brand Goswami goes, the persona has to follow. The image he has created means that his brand is now identified by his persona," Bijoor adds.

While brand domain experts agree with this assessment of Goswami's brand and persona, and the visibility he has managed to get on social media, his peers in the industry are reluctant to talk about him.

Veteran journalist and consulting editor at Headlines Today Rajdeep Sardesai plays it safe, saying, "I will always wish him well," while others refused to talk, at least not on record.

One such senior journalist claims to have not seen enough of Goswami's shows and coverage on TV to comment, while another says that while he did bring about a disruption in the TV news segment, it was not necessarily a good thing. The journalist, however, refuses to elaborate further, saying, "I'd rather not be impolite."

Amidst all this, Goswami is set to launch his own venture, the details of which are sketchy at best.

While some in the industry believe he will be starting a digital-TV hybrid news entity, something Raghav Bahl is also trying with the Quint-Bloomberg JV, others believe he may stick to TV news.

Grapevine also suggests that Goswami may team up with Rajeev Chandrasekhar to launch a 24 hours English news channel.