Ansuya Dutt, who never stopped fighting for women's rights, can be an inspiration to us never to lose sight of our basic beliefs, never mind peer pressure.
Jyoti Punwani salutes the incomparable lawyer who fought in court for the rights of thousands of Mumbai's women. 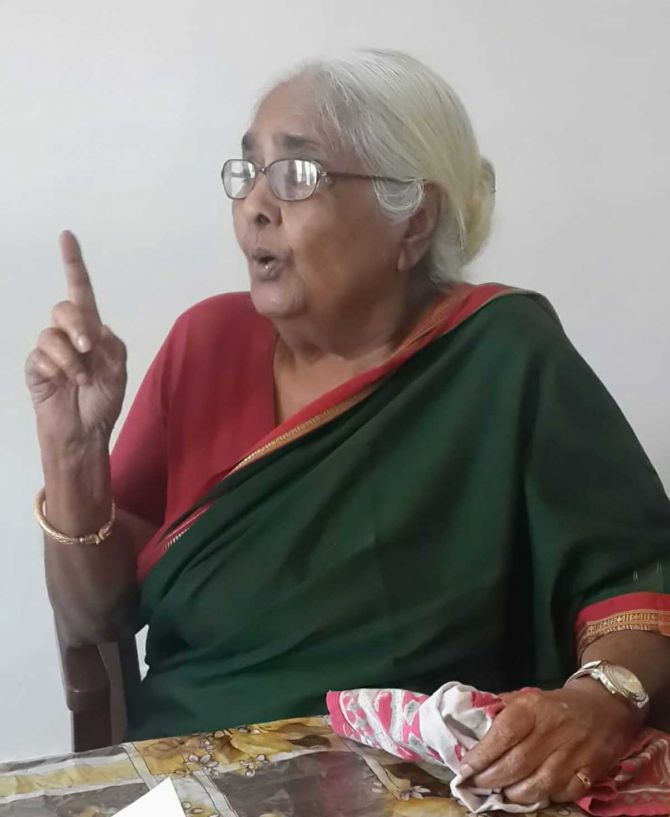 Meeting Ansuya Dutt remains one of the more pleasant memories I have of a time when I was interviewing many leading lawyers.

Ram Jethmalani, not given to tolerate fools, would scowl, his bushy eyebrows coming together, if you happened to ask a question revealing your ignorance or incomprehension about the legal point that he was then making.

Senior criminal lawyer P R Vakil would almost dictate his answers in a slow sonorous tone. Though I grew friendly with him, his imperious personality never failed to intimidate me.

Quite different from both these was Ansuya Dutt.

She was not just warm (which, depending on his mood, Jethmalani too could be), she was actually welcoming. Ammu Joseph, who knew her both as a journalist and a client, remembers, "I really appreciated the fact that she was not only a kind, warm, fun human being but also a quiet, solid source of support, prioritizing and protecting the interests of her client without grandstanding."

Interviews with Dutt, a lawyer who had specialised in divorce and matrimonial law for decades, always ended up giving you insights on the status of women. She was always on the side of women's rights, but never hesitated to point out when the woman was at fault in a particular case.

This was the 1980s. The Mathura Rape Case had spawned the first autonomous women's group in Bombay, which many of us had joined. We were all subscribers of Manushi, the country's first feminist magazine. So I would be shocked when Ansuya Dutt would narrate instances of indefensible conduct by women that she came across in the many cases she handled.

It is not always the man who is the wrongdoer, Dutt would smilingly say.

However, her experience had also shown her very clearly, just what the status of women in India was.

Having dealt with umpteen cases of violence against women in the matrimonial home, Dutt once told me, "The way we shoo off a dog, and kick it if it refuses to go, merely because its presence irritates us, in the same way is a woman beaten and thrown out by her in-laws."

In those days, not just parents, but also policemen and counselors at women's shelters (only one existed then in Mumbai: Bapnu Ghar) would advise battered woman to make the best of their marriage, even blame the woman for having provoked the violence.

Many women too, accepted marital violence as a norm. Dutt revealed that one of her clients, a post-graduate, asked her: "Isn't it a man's right to beat his wife?"

Not in Dutt's scheme of things, it wasn't. She advised wives to hit back, and since husbands were usually physically stronger than their wives, to use sticks to do so.

Not everyone took her advice, but two of her clients did, after much hesitation. Both found their children ready to help them take on their father, and while for one, the abuse stopped altogether, for the other, it reduced significantly.

"These wife-beaters are the greatest cowards," Dutt explained. "When they find their authority challenged, they just can't accept it." ('Loved, tied and beaten', The Sunday Observer, December 18, 1983)

As is obvious from her advice, Dutt was no respecter of convention. Nor did she hesitate to speak out against popular figures.

Bigamy became a hot topic when Dharmendra's marriage to Hema Malini, and Dilip Kumar's to Asma became public knowledge. Both marriages were regarded by their fans and much of the film industry as grand love stories. Amul even had a hoarding saying 'Two are better than one'.

But Ansuya Dutt had seen too many women suffer at the hands of bigamous men, either as spurned first wives or as deceived second wives, to gush about these stars.

Explaining what motivated men to break the law and commit bigamy, she said, "It's a question of values, Like Dharmendra, a man may be shameless." ('The second wife', The Sunday Observer, April 11, 1982)

Having seen how difficult it was to punish bigamous men, Dutt wanted it to be made a cognisable offence so that police could arrest the man if they got reliable information that he was to marry a second time.

Also, she felt the need to set up family courts for offences such as bigamy, because the normal criminal courts took too long and needed the wife's presence at every hearing.

"Women have neither the means nor the stamina nor the time to come to court every time," she observed.

It took seven years after this interview for the first family court to come up in Mumbai. But bigamy is yet to be made a cognisable offence!

Ansuya Dutt had varied interests. She was on the board of Kishore Bharati, an experimental project started in 1971 by well-known scientist and educationist Professor Anil Sadgopal in Hoshangabad, to teach science in innovative ways to school children.

She was always associated with progressive causes. But the two markers of her identity were women's rights (she was a feminist before the word became popular in India) and secularism.

The Shahbano affair in 1985, followed by the Ayodhya campaign led by L K Advani, led to established secular values being challenged in public by an aggressive Hindutva lobby.

A Uniform Civil Code had till then been a women's rights issue, because the personal laws of all faiths discriminated against women. But the BJP made this demand their own, giving it a clearly anti-Muslim tinge.

Wary of the BJP's majoritarian politics, women's rights groups dissociated with the demand, asking instead for reform in personal laws driven by the respective community's women.

In that atmosphere, to support the demand for a Uniform Civil Code carried the risk of being labeled communal.

But Ansuya Dutt wasn't the sort to be intimidated by public opinion.

Arguing that the way personal laws were implemented left women with hardly any rights, she asserted her belief in a Uniform Civil Code. As one who believed in secularism, she said, she could not accept religion as a basis for personal law.

Such a code would also help unite women to fight for their rights, she said. "You can have different communities co-existing, but not governed by different laws which discriminate between them. We will start thinking unitedly only when governed by one law." (The Sunday Review, July 23, 1995)

It takes a rare courage to stick to one's beliefs when even one's peers don't hesitate to ascribe motives.

In today's social media-dominated world, this is even more difficult.

Ansuya Dutt, who never stopped fighting for women's rights, can be an inspiration to us never to lose sight of our basic beliefs, never mind peer pressure.

Susan Abraham pays homage to the legendary lawyer, the likes of who we won't see again.

Ansuya Ma'am for her juniors, formally Mrs Dutt and Ansu to her close friends, Ansuya Dutt passed away peacefully at 8 am at Mistry Court, near Marine Drive, watched over closely by her companion of many years, Gopal Ratnam.

Many mistook her for a Bengali, but she was actually a Punjabi. She did her graduation from Santiniketan and studied law in Delhi. She came to Bombay as a company executive in the 1950s and began practice in Mumbai in 1963 when there were only a handful of women lawyers.

She joined the chambers of Ganesh Shanbag, Daniel Latifi and other stalwarts at Bombay Mutual Chambers near Stock Exchange.

When Shanbag became a public prosecutor, he left the office in the able hands of Ansuya.

She was a formidable lawyer who honed the entire matrimonial law practice in Mumbai from before the setting up of family courts in 1989.

I knew BC (as her husband Balai Chand Dutt was fondly called) before I met Ansuya. I had intervewed him for a Naval Mutiny anniversary issue of a student magazine in 1976. They were married in 1955 and their son Tanuj was born three years later. BC left Bombay and went to work with the Yusuf Meherally Centre.

Ansuya passed her law degree and began her practice when her son was little and it must have been a tough journey for her. But she never showed any signs of the stress and strain of bringing up a child alone while in a demanding profession as a lawyer.

Her office saw many lawyers come and go, but the one steady advocate who remained with her was Narayan Suvarna who was her most able assistant lawyer for over 30 years.

She gave me shelter when I was down and out. My husband Vernon Gonsalves was a political prisoner in 2007 arrested by the Maharashtra police. I was looking for office space to work from. Our common friend Kumud Shanbag told her about it and she immediately agreed to allow me to work from her office.

It was a warm and cosy place with the motherly Ansuya ensuring that everyone ate a full lunch prepared by her faithful cook Kannan. While I was here from 2010, two other lawyers -- Jalaja Nambiar and Radhika Mehta -- were the lawyers who join her chambers.

I was amazed at her ability to counsel those in distress poor or rich.

Having established her seniority as a matrimonial lawyer (she hated the term 'divorce lawyer') the rich and famous as well as those with no means could all walk into her office and get expert advice and work in the courts.

She maintained a balcony with a garden which most other lawyers would have turned into additional space.

If a poor litigant would walk in, she would assign the work to one of her juniors and say with a wink "aap ko dharam ka bhi kam karna hai na"!

We celebrated her 90th birthday in 2017 in grand style.

When her friends would advise her that it was time to retire, she would reply that the day I stop coming to this office, I will fall sick.

And that's really what happened.

A little before her 90th birthday on 4th December, she was down with a bad chest infection.

She couldn't come to the office then and then she slowly stopped coming altogether.

In the last three weeks of her life, I witnessed her strength even while preparing for death. Stubbornly refusing to be taken to a hospital and tapering off her food intake. She reminded me of those saints then.

She finally left the world in the most peaceful way imaginable at 8 am on 9th March a day after International Women's Day. 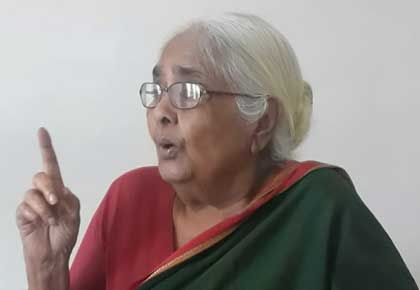 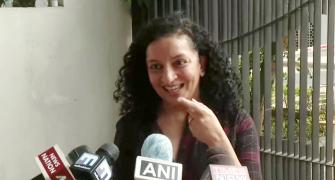 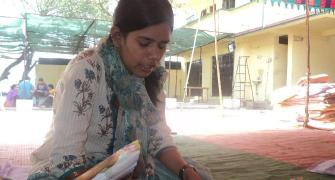 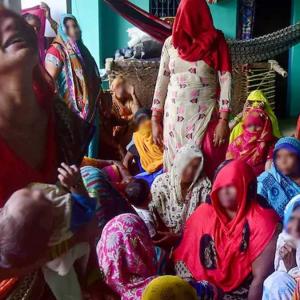