Dad had sneaked into East Pakistan (present day Bangladesh) well before the war had started for reconnaissance of the terrain on the other side.
He had disguised himself as a driver of a truck laden with goods and traveled into East Pakistan to be received by the underground fighters of the Mukti Bahini. 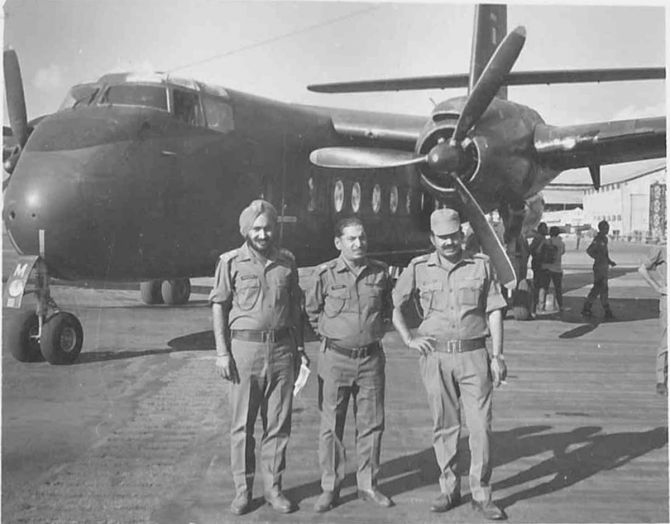 IMAGE: Colonel Bal K Sathe, centre, with the Caribou at Dacca airfield prior to departure, this is the airplane he came back in to Calcutta. All photographs: Kind courtesy Air Commodore Nitin Sathe (retd).

Air Commodore Nitin Sathe's father Colonel Bal K Sathe was one of the many heroes of the 1971 War. In the first of a series of encounters with 1971 War Heroes, he recounts his memories of Colonel BK's valour in that war in which India defeated Pakistan.

The siren wailed yet once again.

It was early evening of the 20th of December and my father's birthday.

A day earlier had been my sister's birthday and we had had a quiet celebration at home.

Dad was missed as this was one of the few times that he had not been present for his daughter's birthday.

From where ever he was posted, he would invariably pay us a surprise visit during the last days of the year getting along many interesting presents, and, of course, chocolates.

This time, he was fighting the war.

The 1971 War was all but over on the 20th of December and the entire country was celebrating a resounding victory.

The photographs of the signing of the instrument of surrender of Decem,ber 16th had been flashed on the front pages of all newspapers.

But for us, it still appeared to be dragging on with air raid sirens going off a few times during the day and night.

We had been taught to run to the corner, face the wall and stand there till the 'all safe' siren went off signaling that the threat had passed.

I remember hiding under the sofa in the living room and finding it an interesting place to pass my time with my toy rifle!

The logic, as we understood it then, was that if a bomb was to strike the house, we would be safe from falling debris.

But no bombs fell anywhere near where we were living in Deolali in Maharashtra staying at the separated family quarters while our fathers fought the enemy at the front. 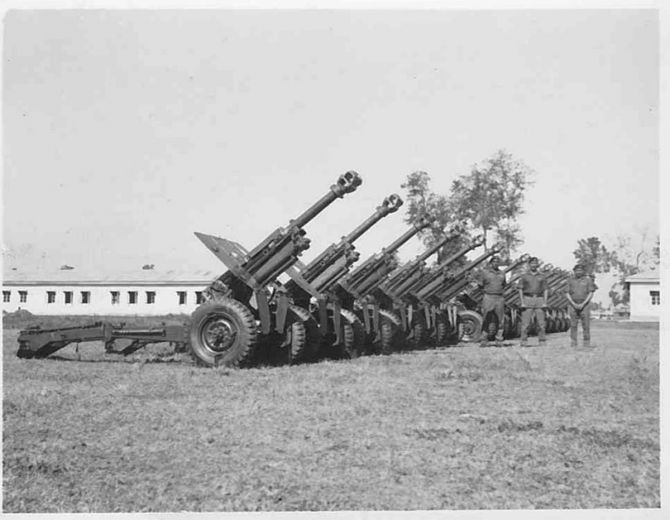 IMAGE: Colonel B K Sathe, a couple of his men and the guns.

The doorbell rang as soon as the all clear siren went off and we looked at each other.

Who could it be walking around in the open with a threat of an air raid we wondered.

Beyond the open door stood a postman in his crisp khaki uniform with his side-cap perilously dangling from his head.

My mother's face went white and she sat down on the floor as soon as she heard the word.

Just the other day she and her friends had gone to pray at the temple to thank god for the safety of their husbands after the surrender was signed.

As they returned, they saw some commotion at the Kulkarni residence.

The postman had just delivered a telegram about Major Kulkarni's sad demise on the eastern front.

We three children looked at each other not knowing what had led to mummy collapsing in a heap whilst our grandmother and maid rushed to help mummy on to her feet.

As they struggled to get her up, she whispered, 'Open it'... or words to that effect.

That is when the enormity of the postman with the telegram struck us. 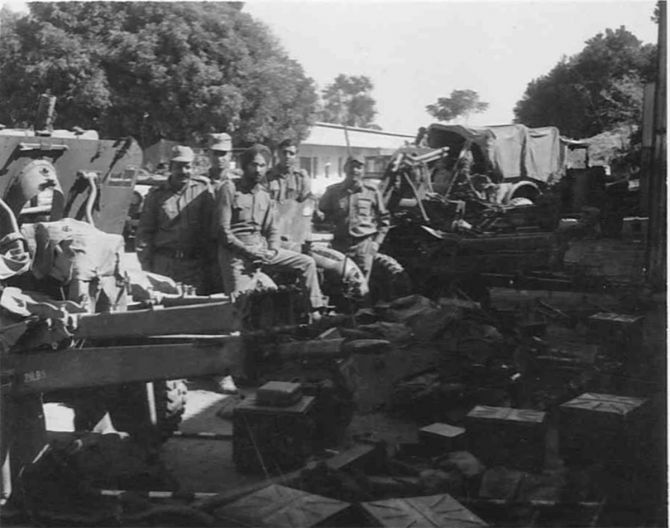 IMAGE: The guns and the officers. Place unknown. Most probably after cessation of hostilities. You can see the ammunition boxes and other equipment lying around.

The telegram had been the harbinger of bad news through the war and this could be just it.

After passing the small piece of paper all around, no one had the courage to tear it open.

Finally, it was the postman who volunteered to do it for us.

'Why don't the censors open these telegrams too and send them to us?' my mother remarked after we relaxed.

A few months earlier, one of dad's letters to her in the special 'Military Inland Letter' had been opened and some lines obliterated with white ink.

Thereafter, all letters from the 'front' from dad had arrived opened and with a big stamp 'CENSORED' across the top. 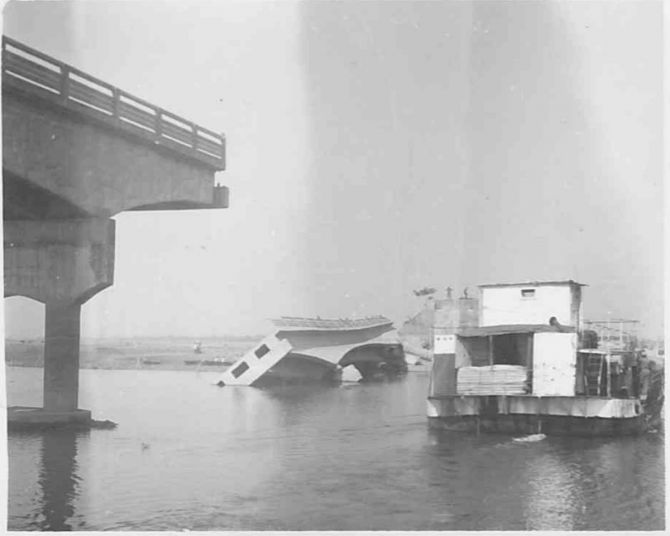 IMAGE: The bridge on the road leading to Dacca bombed by the Indian Air Force.

Dad had been promoted during the war and was to take over as commanding officer of a 'new raising' (new regiment) very soon.

In fact, he was to move out of the eastern front and be with us on his way to the new location.

The only thing we knew of the war was the wailing siren which brought our world to a standstill.

We had keenly participated in the exercise of pasting newspapers on all the glass windows of our home so that no light would filter out during the night.

It was as if the Pakistan air force was waiting for us to give our location away and bomb us to smithereens!

Other than that, it was business as usual at Deolali -- school in the morning, homework and play in the evening. 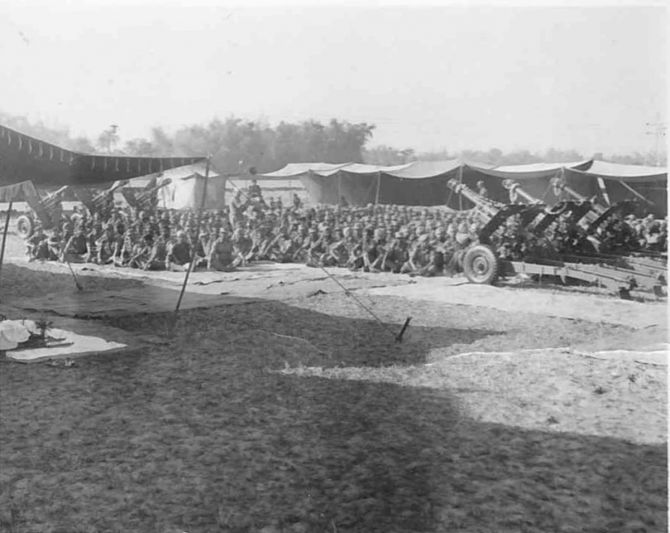 IMAGE: The Sainik Sammelan prior to deployment.

Dad operated in the eastern theatre in 1971 and was the second in command of the Mountain Regiment which had the 75/24 pounder British guns.

Called the 25 Pounder by the British and used extensively in the Second World War, this gun had been modified and refurbished by the DRDO in the 1960s and called the 'Packed Howitzer'.

"It could fire at low and high angles unlike the old British version making it ideal for the mountains," remembers Indian Army veteran Brigadier Gharpure who fought in the western sector.

Once we had the 105mm Indian Field Gun, the 75/24 was taken off service and was soon basking in museums and as roadside displays in cantonments.

I remember dad telling me that the 75/24 guns could be broken up into parts in a jiffy and could be carried by three 'Khacchars' (mules) to the new location of deployment.

This mobility gave the artillery of that time increased survivability.

The enemy gun locating radars took time to find out where the artillery fire was coming from and while they did their trigonometry, the guns had already been moved away to safety!

The range of the gun was just about 9 km and was ideal to be deployed alongside the infantry fighting in the mountains.

Although it was a vintage design, the 'Topchis' (Artillery men like to be called that) of yesteryear swear by this gun.

It was accurate, highly mobile and almost maintenance free, my father told me. 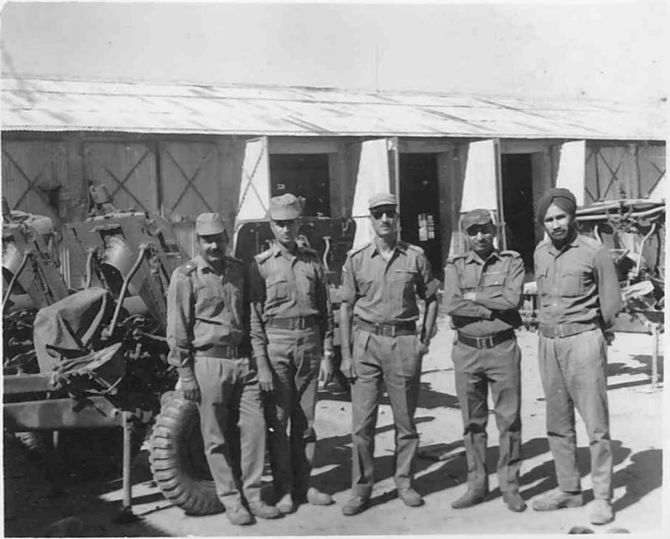 IMAGE: Colonel B K Sathe, second from right, with fellow officers and the guns.

Dad had sneaked into East Pakistan (present day Bangladesh) well before the war had started for reconnaissance of the terrain on the other side.

He had disguised himself as a driver of a truck laden with goods and traveled into East Pakistan to be received by the underground fighters of the Mukti Bahini.

He operated in and out of East Pakistan right from the May of 1971 till war was declared.

Now in open domain, India was indeed involved in arming and training the freedom fighters of East Pakistan.

Dad was part of this effort and he didn't divulge much to us even after he retired.

A few years before he passed on, he did try and remember what all had happened, but I think it was too late.

Yes, he described how he had grown a beard, learnt a spattering of Bengali, was comfortable wearing a lungi and learnt to live off the land in the absence of any ration supply.

He once told me how he had enjoyed eating a snake, which he said tasted just like fish.

From what I have been able to discern, some of the artillery was inducted into the hills of East Pakistan well before the war had begun to help the Mukti Bahini fight the war. 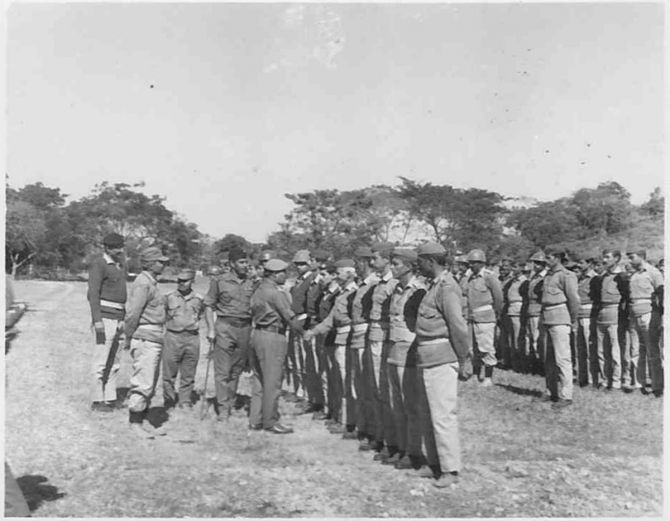 There is one incident that he oft repeated to his grandchildren which went thus:

'I was leading a recce mission through the jungles in heavy thundershowers. It was imperative that we got to the next way point as we navigated through the marsh and swampy earth through the darkness of the night', he used to start.

The team had taken a momentary break behind a big rock and dad handed his weapon to his buddy and went some thirty feet ahead to look at what lay on the other side of the high ground.

Within a minute or two of his walking away, a bolt of lightning struck very close by making him jump out of his skin.

Looking back, he was aghast to see that the soldier who had held his weapon had been reduced to ashes.

Two of his boys in the team were dead.

They performed the last rites of their fallen brothers at the site itself and moved on through the rain and lightning to their destination.

Every time my father heard peals of thunder and saw lightening, he was reminded of this unfortunate incident and how he was saved by a whisker on that fateful day in the jungles of East Pakistan. 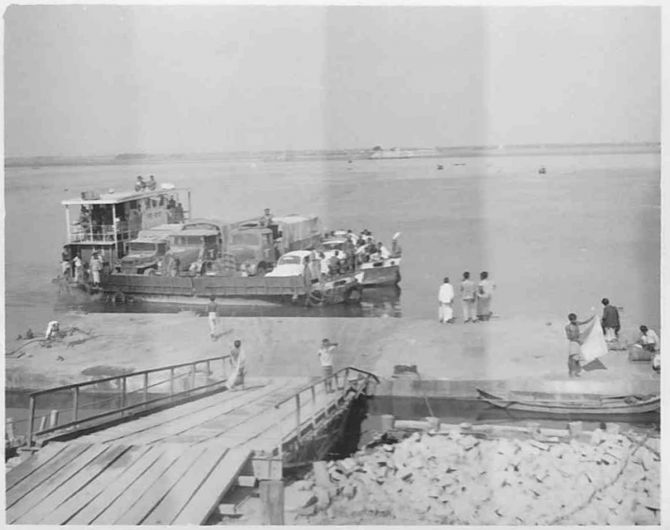 IMAGE: Vehicles cross one of the numerous rivers in then East Pakistan.

I realised that I needed to get the stories of the war yet untold from the veterans and got busy connecting with dad's comrades.

In a few years from now, these gallant grand old soldiers would have finished their tenure on earth and the unwritten history may die with them.

Having got in touch with a few of them, my endeavour is to get to you as many untold stories that I can in the next few weeks that we celebrate 49 years of the war.

My father arrived in Dacca with his men and guns a few days before the signing of the surrender.

A friend from those times, a retired general, describes how my father drove through the war-torn roads of Dacca in his open jeep.

"He used to drive fast through the town and behave as if the Indian Army owned the town!"

"Friendly with many locals, he found help at hand whenever he required it in this city," the general remembers.

On the 19th of December he had gone to the local post office and sent us the telegram, not realising what consternation it would cause at our end!

Dad was airlifted from Dacca airport on the 21st of December, 1971, in a Caribou aircraft.

He was moving to take over as the first commanding officer of a newly formed medium regiment which was to operate with the recently acquired Russian 130 mm guns.

His unit was to be formed out of soldiers who had been drawn out of a unit which had been all but decimated during the war.

A few days later, he was with us, a war wizened father who was all set to command a new set of people. 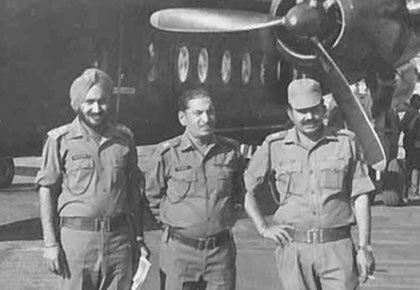 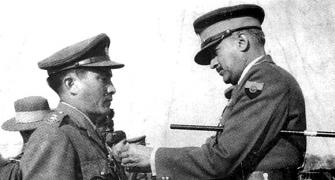