Sign in  |  Create a Rediffmail account
Rediff.com  » News » US Sikhs come out in protest against Rajoana verdict

US Sikhs come out in protest against Rajoana verdict 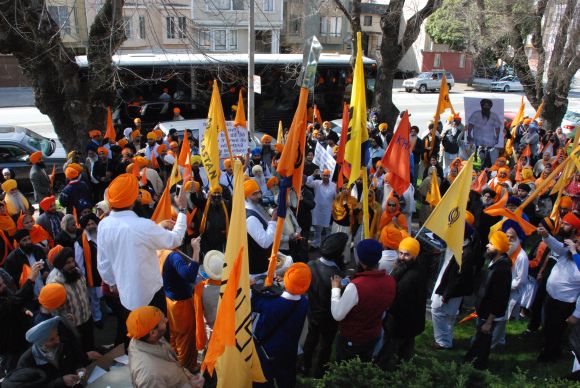 Hundreds of Sikhs, including a large number of women and university students participated in a protest on Friday outside the Indian Consulate in San Francisco, California, to show support to Bhai Balwant Singh Rajoana who was sentenced to capital punishment in the case of murder of former Punjab chief minister Beant Singh in 1995.

"It's an expression of outrage," Amandeep Singh Gill, one of the main organisers of the rally and member of the Sikh Student Federation at University of California, Berkeley, told rediff.com.

Gill said it is a global movement for Rajoana. "The protest is to highlight the reality of 1984 anti-Sikh riots, the pain of which is very still very much alive." 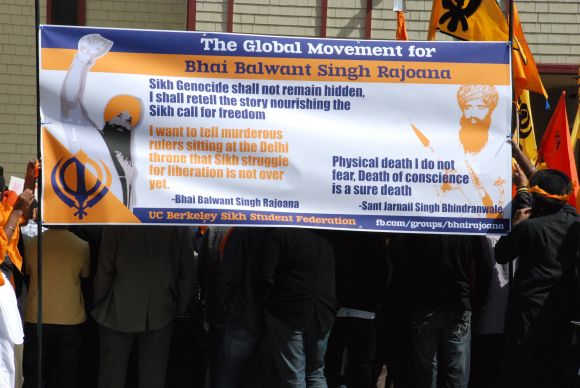 Image: A banner invoking Rajoana's words is seen at the Sikh protest in San Francisco on Friday
Photographs: Ritu Jha/Rediff.com

He also said though India's judiciary is often praised for its commitment to liberal values and the supposedly secular ground on which it adjudicates between different religious communities, this judgment exposes that the Indian legal system is a farce.

"Those responsible for the mass murder of Sikhs in 1984 have not only ever been brought to justice, but have actually been given high government posts which they continue to enjoy till day," added Singh.

He said Rajoana's act was not a crime, but marked a war between one sovereign nation and another. "His action and legacy will be an inspiration for Sikhs because it exposes not just the violence of the state, but also its extreme fragility."

"Yes, we want to show that the struggle is still going on and it's not forgotten," he said, adding, "Today's protest is not just coming from committees or gurdwaras, but it's coming from students."

Gurpreet Kaur, 18, San Jose State University student who was also at the rally said she leaned about Rajoana through Gurudwara and also overheard her parents talking about him.

'Rajoana is my motivation' 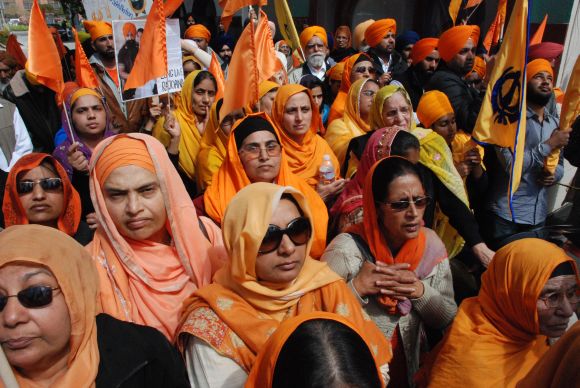 "My interest grew and I just googled and did more research about him. It's sad to learn that something like this is still happening in India."

On what motivated her to participate at the rally, Kaur said that Rajoana is her motivation. "It show what people's aspiration are, how strong you believe in, and this makes me the happiest person to be able to born as Sikh. I'm so proud of being Sikh," said Kaur.

A court has issued death warrant for Bhai Balwant Singh Rajoana, ordering him to be hanged until death on March 31 at Patiala jail.

Rajoana was given a death sentence in 2007 for assassinating then Punjab Chief Minister Beant Singh in 1995.