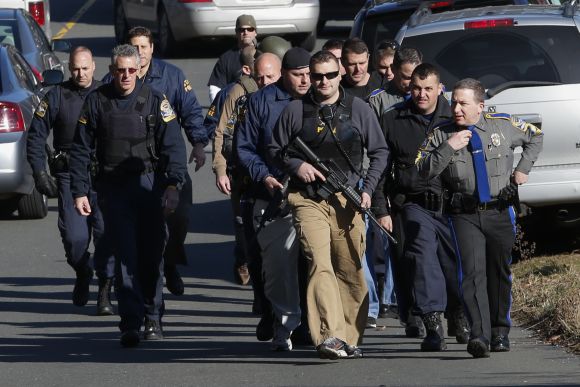 At least 20 children were among 28 people killed when a young man opened fire inside a United States school on Thursday, in yet another tragic shooting that ended with the death of the gunman and left the country shocked and horrified.

Wearing a military-style vest, Adam Lanza killed his mother after he stormed into Sandy Hook Elementary School in Connecticut, carrying a Glock 9 mm handgun, a SIG Sauer handgun, killing 26 people, including 20 children, before turning the gun on himself. 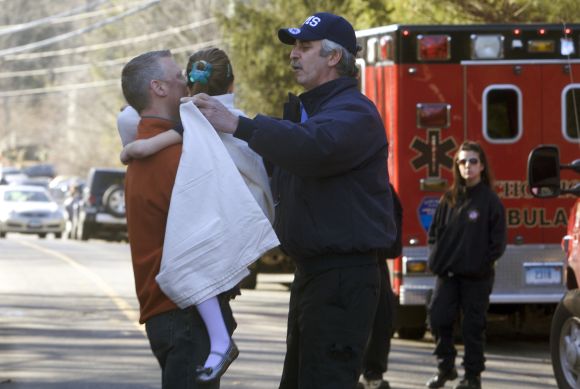 Image: A young girl is given a blanket after being evacuated from Sandy Hook Elementary School following a shooting in Newtown, Connecticut
Photographs: Michelle McLoughlin/Reuters

The incident sent crying children spilling into the school parking lot as frightened parents waited for a word on their kids.

Connecticut State Police lieutenant Paul Vance told reporters outside the school that the "shooter was deceased inside the building."

The two pistols were found inside the school and a .223-caliber Bushmaster rifle was found in the back of his mother''s car in the parking lot, the New York Daily News reports.

According to the report, all three are highly lethal weapons manufactured for combat and to stop criminals.

Fox News quoted a law enforcement official as saying that the 20-year-old shooter is believed to be a father of one of the students at the school.

"I was in the gym and I heard a loud, like seven loud booms, and the gym teachers told us to go in the corner, so we all huddled," one student told NBC Connecticut during its live broadcast. "And I kept hearing these booming noises. And we all... started crying". 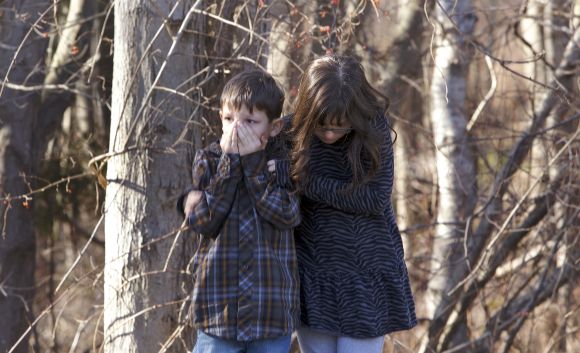 "All the gym teachers told us to go into the office where no one could find us," she added. "So then a police officer came in and told us to run outside. So we did and we came in the firehouse and waited for our parents."

Pictures showed panicked children, some of them crying, being led out to safety by their teachers.

US President Barack Obama was briefed by his top counter-terrorism advisor on the deadly shooting shortly after which he called the FBI Director and the Connecticut Governor.

Obama spoke to Connecticut Governor Dannel Malloy and expressed his condolences to the families of the victims. He promised that his administration would offer all help necessary to help deal with the tragedy.

Vance said the police received a 911 call at around 9:30 in the morning (local time) about the shooting. The school has been evacuated and the police is extensively searching the "every door and crack of the school" for information about the shooter and the motive.

A woman on the scene told CNN that "20 parents were told that their children are dead. It was aweful."

The police set up a staging area outside the school where all the students were escorted to and reunited with tensed and worried parents.

Vance said the scene has been secure and many agencies are working together to investigate the horrific incident. 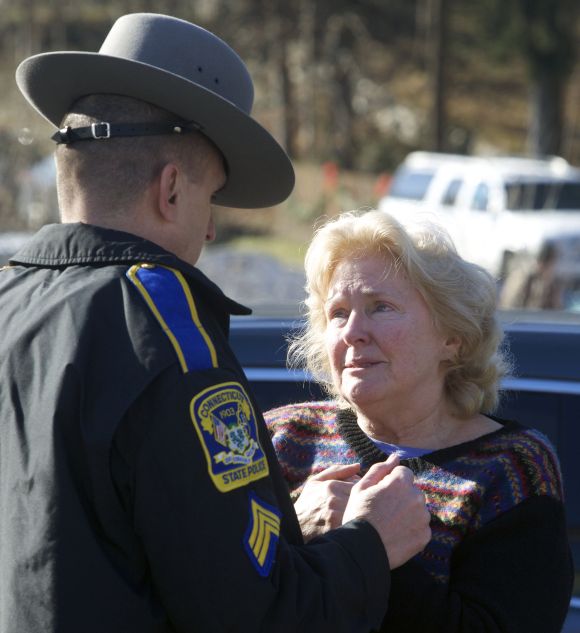 Image: A woman speaks with a Connecticut State Trooper outside Sandy Hook Elementary School after a shooting in Newtown, Connecticut
Photographs: Michelle McLoughlin/Reuters

Newtown is about 60 miles northeast of New York City and the school has about 600 students.

NBC Connecticut further reported that the entire school district was in lockdown and police and FBI agents were going room to room searching the school.

Such cases have prompted several politicians to seek a review of American gun laws. In August, a gunman went on a shooting spree in a Wisconsin gurdwara, claiming six lives.

In July, 12 people were killed and 38 injured in Colorado where a gunman opened fire at the premiere of the Batman movie 'The Dark Knight Rises'.