'Telangana must be patient; it's a complex issue' As Congress lawmakers from Telangana stepped up pressure by tendering their resignation, the Centre on Monday said it had not taken a final decision on the 'extremely sensitive and complex' issue of separate statehood.

Home Minister P Chidambaram appealed to the MLAs, a Rajya Sabha MP and Andhra Pradesh ministers from the Telangana region to be patient and allow the consultation process on the statehood demand to continue.

"The central government's view will be made known after the consultation process is over. We have to bring everyone on board. There is a strong view of large number of people. We are yet to take a final decision," he told a press conference in New Delhi.

His remarks came as 37 MLAs, 16 MLCs and four ministers submitted their resignation to Assembly Deputy Speaker in a bid to pressurise the Centre to take an early decision on the Telangana issue.

'December 9, 2009 statement was made on behalf of the Government of India' Chidambaram insisted that the December 9, 2009 statement made by him was "not made by an individual but made on behalf of the Government of India".

The statement had said that the Centre would initiate the process for the formation of a separate Telangana state.

But, the Centre again made a statement on December 23 in which it was emphasised that more consultations are needed on the issue.

"When you refer to my statement on December 9, 2009, you should kindly also refer to the December 23, 2009 statement," he said in reply to a specific question.

MPs and MLAs must allow the consultation process to continue 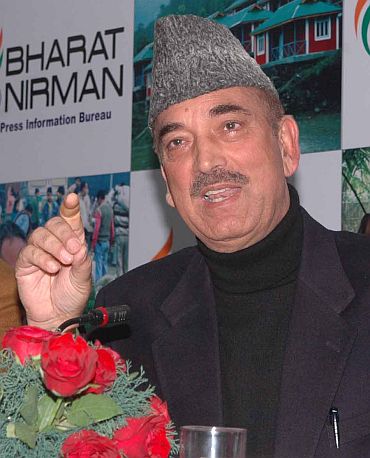 Chidambaram denied that the situation in Telangana was getting out of hand and that there was a threat to Andhra Pradesh government following large scale of MLA's from the Telangana region resigning from the state assembly.

"The MPs and MLAs had forewarned us on the issue that they would be obliged to offer their resignation on July 4. It is not that alarming. Ghulam Nabi Azad, Congress general secretary in-charge, is talking to the MPs. He is in touch with the MLAs," he said.

Chidambaram said the party would persuade the MPs and MLAs to be patient and allow the consultation process to continue.

Asked about when the much-awaited all-party meeting on the issue will be held, Chidambaram said two of the parties have not yet finalised their views on the separate statehood issue and the meeting would be called immediately after the views of all parties are known.

To queries about demands for a deadline and the action by the MPs and MLAs, the Home Minister said he understands their "impatience, but this is a complex issue and we will try to expedite".