There is a lot at stake for the Congress in Andhra Pradesh with all members of legislative assembly and members of Parliament of the party from the Telangana region deciding to tender their resignation on Monday. Currently, hectic efforts are on to pacify these leaders not to resign from their posts.

The state Congress has deputed Bosta Sathyanarayana to hold talks with the leaders to reconsider their decision. Sathyanarayana, who is the Andhra Pradesh Congress chief does not appear to have been successful in his attempts to pacify the leaders.

The Telangana Congress leaders say that they have a lot at stake and it is high time that party took into consideration the feelings of the people of Telangana.

The Congress chief of state however informed that efforts are on, and these leaders should not take any hasty step.

"We also have to think about the sentiments of the people of the rest of Andhra Pradesh. All we are asking for is a bit more time so that we could work out a way to tide over this problem. We want all sections in the state to be happy," Sathyanarayana said.

However several rounds of meetings with the Telangana leaders went in vain with the leaders sticking to their decision. There has been a longstanding demand by the people of this region that their lawmakers resign en masse.

The Telangana leaders said that they are unable to go to their constituencies ever since the Union government backtracked on its word regarding formation of a separate state.

"The Shri Krishna Commission recommendations have only made matters worse for us," the leaders said. One of the MP's from the region, Keshava Rao when contacted said that they are firm with their decision and would be leaving for New Delhi where they would submit their resignations to the high command on Monday.

The leaders said that they did not want matters to turn so ugly and also added that they had given the government a lot of time.

"We waited for the government to make the announcement and we have also met with a lot of leaders several times, including the prime minister over this issue. However, there has been no result. We are under a lot of pressure from our voters and also activists who have been telling us to step down," said an activist.

The activists had always maintained that the real pressure on the Union government would come only if these leaders from the Congress resign."We need nothing short of a constitutional crisis in the state for the government to react," the activist added. 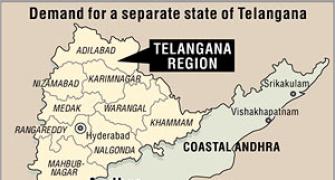 An avoidable mess over Telangana

The Congress has messed up the Telangana issue