Sign in  |  Create a Rediffmail account
Rediff.com  » News » 'RSS never leaves a trail. It should be BANNED'

'RSS never leaves a trail. It should be BANNED' 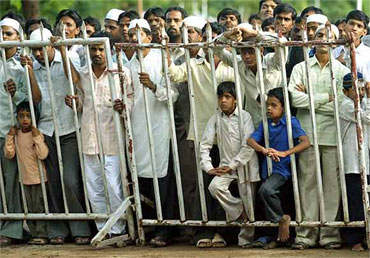 Image: A file photo of people at a blast site outside a mosque in Malegaon
Photographs: Punit Paranjp/Reuters Vicky Nanjappa

The serial blasts that rocked Malegaon in September 2006 altered the lives of many of the residents of the textile town in Maharashtra. Among them were several Muslim youth, who were arrested and charged for the blasts, often wrongly so.

Recently, nine of the many young men arrested in the wake of the blasts were granted bail. They will be able to walk free once the legal formalities are completed.

Maulana Abdul Hamid Azhari, president of Kul Jamaati Tanzeem, has been leading the fight to secure justice for these men. In an interview with rediff.com's Vicky Nanjappa, he says the primary focus of his organisation is to help the youth make up for the precious years they lost while languishing behind bars.

How is the mood in Malegaon after the recent development?

The general mood is happy but a lot needs to be done to ensure that these boys' lives are brought back on track. They have lost many years in jail.

'There is a long way to go' 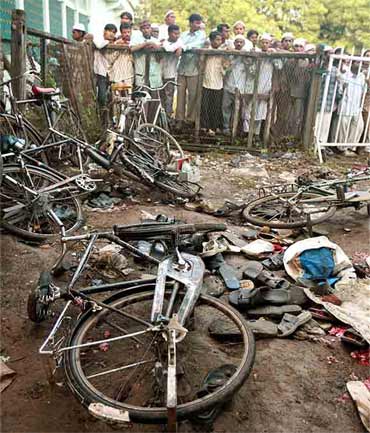 What are your immediate demands?

These boys will be released on bail for the moment. But the case remains and our first demand would be to withdraw the cases against them.

Do you think justice has been done?

Not yet, there is a long way to go. It is not enough if these boys are released or the cases against them are dropped. One must not forget that many people lost their lives in the blasts. It is very important that the culprits who are at large are brought to book as soon as possible.

What about the police officials who allegedly filed false cases against Malegaon youth?

Many of them have filed many false cases, as a result of which the families of these youth have faced a lot of stress, not to mention the trauma these men underwent. I personally feel that these officers should be investigated and necessary action should be taken against them.

'We have hope in the NIA's probe' 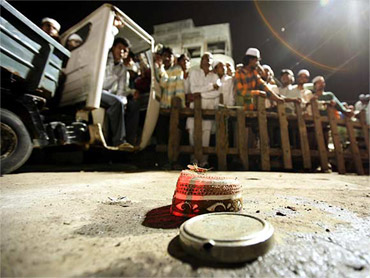 Image: A file photo of a blast victim's belongings lying at the blast site in Malegaon
Photographs: Punit Paranjp/Reuters

The probe indicates that some Hindu outfits were behind the Malegaon attacks. Who do you think the masterminds were?

Yes, the probe has taken another angle. I would not want to name the organisation that is funding such operations.

What is your opinion about the manner in which the government has dealt with the case?

The people are happy today, but I wish justice had been done earlier. We had expected the boys to be released by January. But the case dragged on. We had thought that the government machinery would protect our interests sooner.

Is there hope in the National Investigation Agency (which is probing the case)?

We had hope in the Anti-Terrorism Squad and also in the Central Bureau of Investigation. But the picture we faced when the probe commenced was one of shock and disbelief. We felt a tiny ray of hope when the CBI took over, but then realised it did nothing different from what the ATS had done.

I would like to praise (late ATS chief) Hemant Karkare for the work he had done, but sadly he was killed. Today we have hope in the NIA's probe. We hope that we get real justice. We were overwhelmed when the NIA filed a No Objection Certificate when the bail plea of these youth came up.

'The RSS ought to be banned' 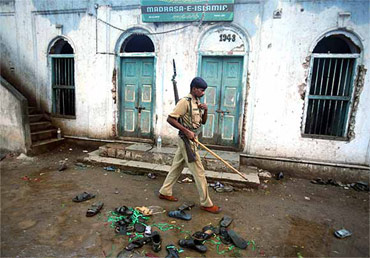 Image: A file photo of a policeman at the blast site in Malegaon
Photographs: Punit Paranjp/Reuters

Do you think the Rashtriya Swayamsevak Sangh played a role in these attacks?

I would not want to come to any such conclusion. But the RSS ought to be banned. It has been banned before but the ban was lifted.

It is the duty of the government to provide proper proof and material before the court to ensure that the RSS is banned. I do notice that the RSS operates very smartly and does not leave any trail behind.

There are rumours that Muslim youth were hired to plant the bombs.

I do not buy this version. It looks like some sort of ploy. The people who carried out the blasts were smart enough to disguise themselves so that the Muslim community could be blamed for it.

Has the social fabric of Malegaon changed after the blasts and the events that followed?

I would not say that. Since day one, all of us have treated this case as an act of terror. There was never a Hindu or Muslim angle attached to it. All we wanted was that the real culprits be brought to book in this case. Even today, there is no feeling of anger between the communities. The situation is very peaceful. Let me assure you that the social fabric in Malegaon has not changed a bit. We believe in peace. 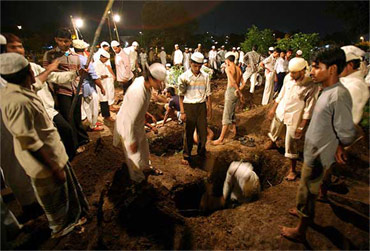 What sort of compensation will you seek for these youth?

How have the families of the arrested youth coped with the stress?

They have coped with it very well. In fact, the community remained united. Since day one, none of us even for a second had any suspicions about these youth. We ensured that their families were always involved socially and not once did we make them feel that their children were alleged to be terrorists. Our confidence in them and the arrested youth made this fight for justice possible.