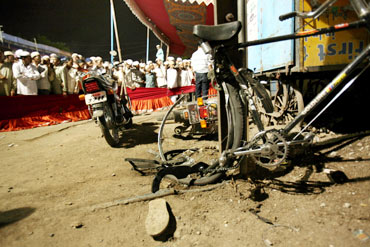 Image: File picture of damaged vehicles at the blast site outside a mosque in Malegaon
Photographs: Punit Paranjpe/Reuters Vicky Nanjappa

The Swami Aseemanand confession may be done, but the road ahead for the investigators is anything but easy. If Aseemanand's confessions are to be believed then the

Investigators told rediff.com that the Malegaon blasts will be the key since it is concerned to be the mother of this terror jigsaw as the breakthroughs were first made in that case.

While the likes of Sadhvi Paghya Singh Thakur, Colonel Shrikant Purohith, Dayanand Pandey and now Swami Aseemanand are already in custody, the investigations will not be complete unless all the agencies probing these cases coordinate with each other and also get into custody a couple more accused who will help complete the terror jigsaw.

Aseemanand's confession is not enough 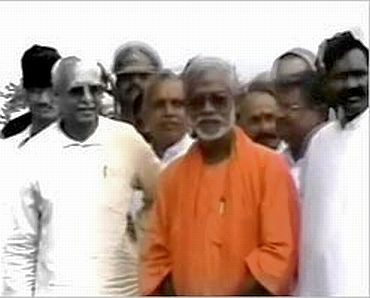 In his confession made a couple of days back, Aseemanand takes the names of Indresh Kumar, Bharat Rateshwar, Sandeep Dange and Ramji Kalsanghra and terms them as major players in the conspiracy behind the blasts.

The Central Bureau of Investigation which is seized of most of these cases says that they will not only have to get these men into their custody, but will also have to travel back to the Malegaon case and interrogate the accused involved in that case since it is all interlinked.

In addition to this the CBI also plans to meet with the officers of the National Investigation Agency which is handling the Samjhauta case and review with them every 20 days regarding these cases and also share information. 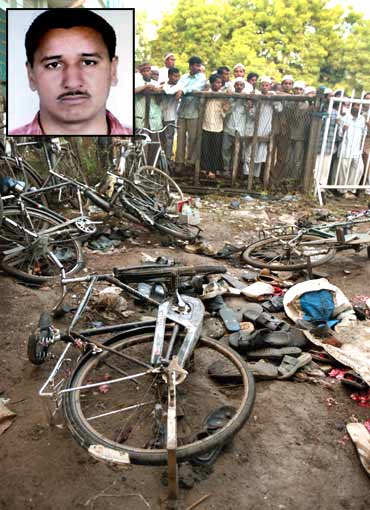 Ramji Kalsanghra: A key man to the investigation, Kalsanghra has been absconding since 2008 ever since the Malegaon probe gained steam.

Investigators say that he used to be a Rashtriya Swayamsevak Sangha pracharak and was directly responsible for the Malegaon blasts. He was also in the know of the rest of the blasts and played a key role in conspiring in these blasts.

Aseemanand in his confession said that he first met Kalsanghra with Dange. Kalsanghra had with them a suitcase with some heavy objects in it. He told Aseemanand that he had just come back from Maharashtra. The next day Aseemanand realised that bombs had gone off at Malegaon.

Investigators say that the arrest of Kalsanghra apart from giving them details about the cases on hand would also help them with information regarding the others in their modules.

Aseemanand also goes on to speak about a meeting that he had with Sunil Joshi in which Kalsanghra was present. It was in that meeting that Aseemanand is alleged to have said that we will reply to bombings with bombings. 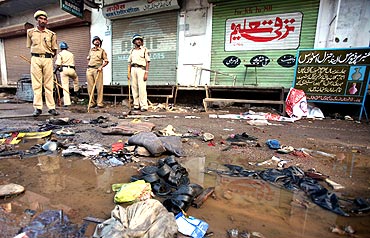 Sandeep Dange: He was also part of the conspiracy and figures several times in the confession made by Swami Aseemanand. He was a RSS pracharak at Indore and he too went missing after the Malegaon probe.

Investigators point out that Dange formed part of a core group in this module and he was in the know of things.

Considered to be very close to Joshi, Dange operated most of the time with Kalsanghra. Aseemanand mentions his name on various occasions and investigators believe that he was with Kalsanghra when the Malegaon operation was carried out.

In fact Dange was also part of the meeting with Aseemanand in which Joshi, Kalsanghra were present. The CBI feels that interrogating Dange will give them clues as to who the persons were who planted the bombs on the Samjhauta Express and also at Ajmer. 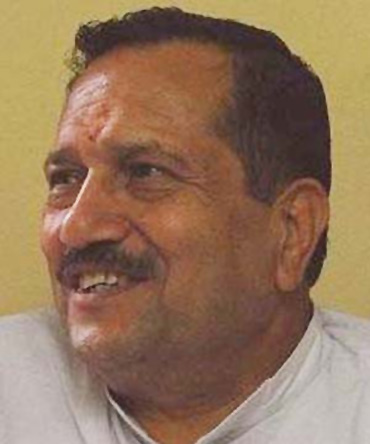 Indresh Kumar: This is probably the most controversial name to come out in this case. A central committee member of the RSS, his name has been taken several times in the past by the various persons interrogated in connection with the above mentioned attacks.

There have been various versions to the role allegedly played by him in these cases.

Sources say that the accused started spilling the beans on him since he had assured them that they would be safe but at a later stage they felt let down by him.

Colonel Purohit too had a falling out with him over the political scenario in Nepal in which India was interested. Purohit felt that Kumar was in favour of restoring democracy in Nepal while he felt that the rule of the king should remain as it needed to continue being a Hindu country.

Today as per the interrogation of Aseemanand, it was Indresh who mentored these attacks and also financed them. The godman also adds that Indresh had handpicked pracharaks from the RSS to carry out attacks.  Aseemanand also says that he met with Indresh at the Shabri Dam ashram at the Dangs region of Gujarat.

Aseemanand says that he was told his job was not to bomb, but to take care of tribal welfare. He also told Asseemanand that he had assigned Joshi for the job and he was ready to extend any help in this regard.

He further goes on to say that Indresh financed these operations and also motivated several pracharaks for them. The CBI or the NIA have not yet taken him into custody, but would be looking to interrogate him in the wake of the Aseemanand confession. 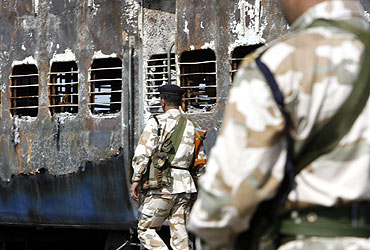 Bharath Rateshwar: His name cropped up on an earlier occasion too. It is said that this businessman from Valsad had allegedly lent his house in which the meeting of June 2006 was held.

Aseemanand says that he along with Sadhvi, Joshi and Rateshwar decided to give a fitting reply for several terror attacks in the country. He also speaks of another meeting in which the Mecca Masjid and Malegaon blasts were discussed.

Further the godman says that in 2007, he met Joshi along with Rateshwar and was told that there would be good news in a couple of days. It was after this that the Samjhauta blasts took place.

Rateshwhar does not figure as an accused in any of these cases as yet.

Ganesh Sovani, advocate for Sadhvi Pragya Singh Thakur, says that Rateshwar's name figures only as a witness in the Ajmer blasts case.

He goes on to add that no agency has tried to interrogate his client after the Aseemanand confession.

"This confession is not incriminating against either my client or any of the accused including Aseemanand. These are all tall claims and based on hearsay which will not survive the test of the legal process. There is no need for us to challenge this and we are presently fighting the case in the Supreme Court where we have challenged the imposition of MCOCA against my client," he said.

The National Investigation Agency on Tuesday announced cash rewards for those who help locate the three suspects in the Samjhauta Express bomb blast case.

A cash reward of Rs 10 lakh each has been announced for any person providing information leading to the arrest of Sandeep Dange and Ramchandra Kalsangra.

A reward of Rs 2 lakh has been announced for any person providing information leading to the arrest of Ashok.