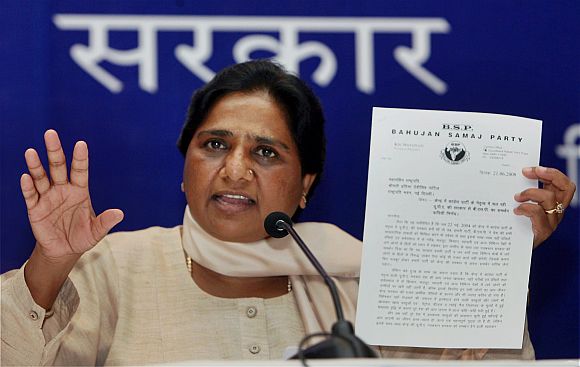 In a bid to outsmart rivals ahead of the assembly elections, Uttar Pradesh Chief Minister Mayawati on Tuesday announced bringing a resolution in the House for carving out four new states in the winter session beginning next week.

Addressing a press conference in Lucknow, she said that the cabinet has approved a resolution for creation of Purvanchal, Bundelkhand, Awadh Pradesh and Paschim Pradesh, which would be tabled in the session beginning November 21.

Claiming that the move was inspired by her ideologue Babasaheb Bhimsaheb Ambedkar philosophy of building smaller units of governance in order to provide better law and order besides ensuring uniform development, she said, "We propose to reorganise Uttar Pradesh into the states of Purvanchal (East UP), Pashchim Pradesh (Western UP), Bundelkhand (Southern UP) and Awadh Pradesh (Central UP)."

Seeking to throw the ball into the Centre's court, where the Congress heads the UPA coalition, the Chief Minister maintained that as per Schedule 3 of the Constitution, the Centre has to take a decision with regard to renaming, reorganisation or creation of new states.

With inputs from PTI
... 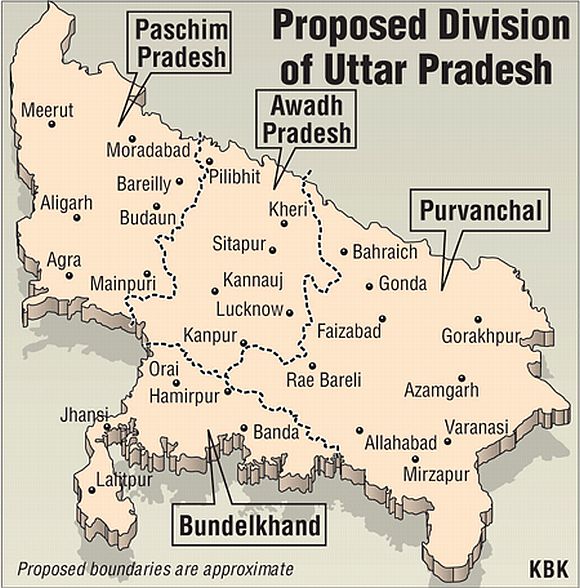 However, she said that as no positive initiative has been taken so far, the cabinet has decided to get the resolution passed and send it to the Centre hoping for a speedy action on it.

Justifying the decision, she said, "As we all know, UP is the country's most populous state with the population shooting up to nearly 20 crores, which means that 16 per cent of the country's population was living here; it also has a gigantic area of over 240,000 sq km; and that was what makes it unwieldy."

She felt that "only a division of the state could solve a lot of its problems and remove the inherent imbalances prevailing in the state."

The chief minister, who had earlier written a letter for reorganisation of the state to the Prime Minister maintaining that it was not in the jurisdiction of the state, on Tuesday said that this decision has been taken after proper consideration to mount pressure on the Centre.

This demand is also in keeping with the aspirations and ambitions of these regions, she said.

Uttar Pradesh has 80 Lok Sabha MPs and an Assembly with 403 MLAs. Mayawati's move today is seen as an attempt by her to cash in on the sentiments in favour of small states in the western and eastern regions and the Bundelkhand area of the state during the assembly elections. 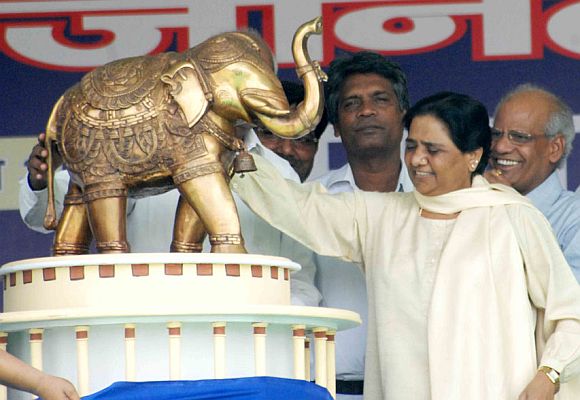 Parties like Rashtriya Lok Dal (RLD) headed by Ajit Singh have been campaigning for small states like Harit Pradesh comprising the western region. Mayawati's main rival, Samajwadi Party, is strongly opposed to the division of the state.

Mayawati went on to add, "once a resolution is passed by the state assembly, we will forward it to the Central government that would be required to table it before the national parliament, where it would have to be passed."

She hoped, "the move would fulfil the much-awaited aspirations of the people living in each of the regions that have suffered on account of neglect and apathy of successive governments – either led by the Congress or the Bharatiya Janata Party.

Lamenting over what she termed as the apathy of national governments towards UP, she pointed out, "even though UP had given the maximum number of prime ministers to the country, none ever cared to do something concrete for appropriate development of the state."

Claiming that hers was the only government that had shown keen and sincere interest in comprehensive development of the state, she said, "Soon after we came to power on our own strength in 2007, I not only wrote to prime minister Manmohan Singh seeking a special economic package of Rs 80,000 crores for the development of the state's backward regions of Purvanchal and Bundelkhand, but also met him personally, but to no avail."

Without making it clear whether it was in favour or against such a move, the BJP has favoured setting up of a States Reorganisation Commission to go into demand for smaller states.