One more ruling Bharatiya Janata Party legislator on Tuesday joined the list of party leaders facing land scam charges with a court in Haveri on Tuesday directing Lokayukta police to probe a private complaint against Nehru Olekar that he secured land to two educational institutions allegedly in violation of rules.

The court asked the Lokayukta police to submit its report on December 20. The complainant has alleged that Olekar using his position as the ruling party MLA managed to secure allotment of 23 guntas of land (one gunta is about 1089 sq feet) to the Dr Bhimarao Ambedkar Education Society in which his son Manjunath is the secretary.

He also claimed that Olekar got allotment of 19 guntas of land to the Ramabai Ambedkar Education Society, run by his daughter Lakshmi.

Both the pieces of land were allotted by the Haveri Urban Development Auhority and the complainant has cited the authority chairman and its commissioner as co-accused. 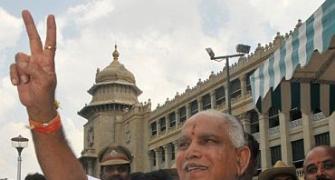 Another UP minister under Lokayukta scanner