Govt bill trashed; Anna's bill has no takers too 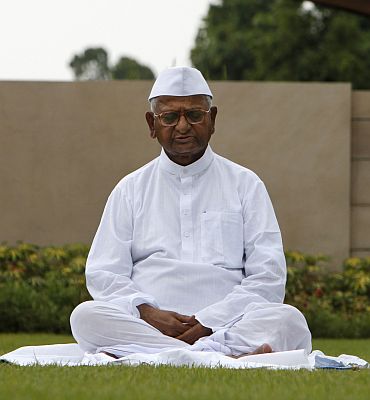 Sheela Bhatt in New Delhi
The all-party meeting convened by the government has seen some interesting position being adopted by political parities on the issue of the Jan Lokpal bill with nine parties asking the government to trash its bill, which is with the standing committee.
However, there are no takers for Anna Hazare's Jan Lokpal bill either.

Most parties have said that the provisions in Anna Hazare's bill can be taken into consideration while drafting the new Lokpal bill.

All political parties want the 'supremacy of Parliament' to remain unaffected; the elected leaders remained united in their attempt to save their turf.

However, Hazare's nine-day fast has made a partial impact on the parties. 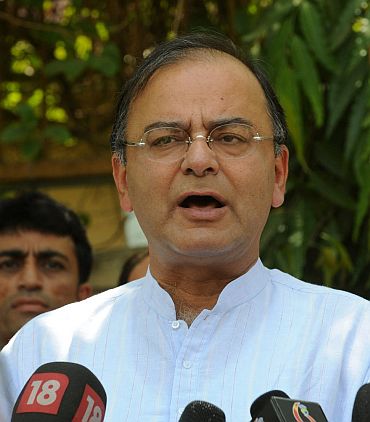 None of the above parties have recommended that Jan Lokpal bill be introduced in Parliament.

However, neither Sushma Swaraj nor Jaitley said that the Jan Lokpal bill should be introduced in Parliament after withdrawal of the government's bill, which is the precise demand of Anna Hazare and his supporters.

The final resolution categorically said, "Due consideration should be given to the Jan Lokpal Bill so that the final draft of the Lokpal Bill provides for a strong and effective Lokpal". This means that the government's Lokpal bill has been trashed by the Opposition parties and it is never going to become a law.

This also means that Hazare's ideas are unlikely to win on the floor of the House anytime in near future.

The wordings of the resolution of the all-party meeting suggests that the bargaining position of Team Anna has weakened.

In an hour, a fresh round of talks between the Team Anna and Pranab Mukherjee will be held. And here government is likely to spell out it's final offer to Team Anna before it takes the decision to shift Hazare to hospital.

The unsaid message of the all-party meet is that notwithstanding Anna's nine-day fast and people's outbursts against the government, most parliamentarians do not want the government to abide by Team Anna's deadline to pass the Jan Lokpal bill in a hurry.

In that sense, the confused, tired and leaderless government will be breathing easy. As expected, Indian parliamentarians do not want to erode their authority, rights and system.