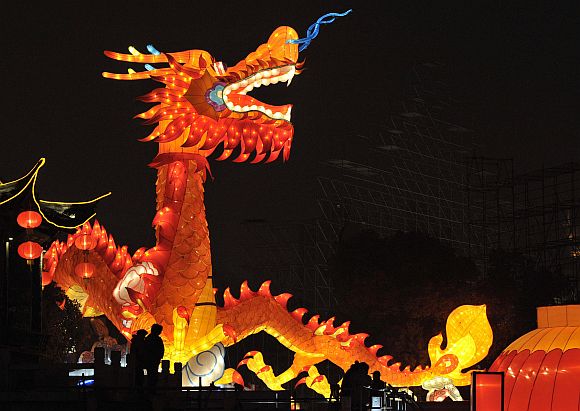 Image: A dragon-shaped lantern is lit up at a temple fair in Nanjing, Jiangsu province, in China
Photographs: Sean Yong/Reuters

One of the chapters in the document titled 'Asian Theatre' has quite elaborate comments on China, and opines that India's China strategy has to strike a careful balance between cooperation and competition, economic and political interests, bilateral and regional contexts.

Rediff.com publishes verbatim a part of the chapter 'Asian Theatre'.

China will, for the foreseeable future, remain a significant foreign policy and security challenge for India. It is the one major power which impinges directly on India's geopolitical space. As its economic and military capabilities expand, its power differential with India is likely to widen.

As is well known, India and China have long-standing disagreements on an agreeable border. Skirmishes and incidents have occurred across the Line of Actual Control. Our strategy should be to 'hold the line' in the north on the Sino-Indian land frontier, but maintain and, if possible, enlarge India's current edge in the maritime south. 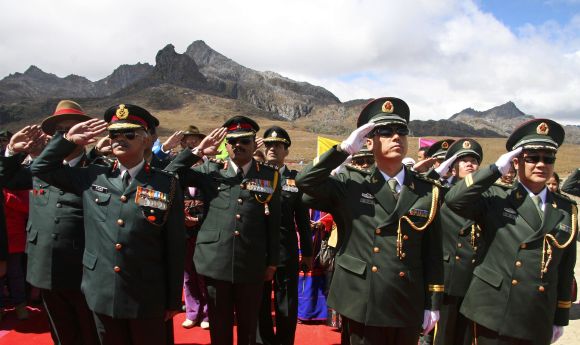 Image: Indian and Chinese soldiers salute during celebrations to mark the 60th anniversary of the founding of the People's Republic of China, at the Indo-China border, near Tawang
Photographs: Utpal Baruah/Reuters

Given that China has managed to settle many of its border issues (at least for the time being) with other, smaller neighbours, the dispute on the Indian border stands out quite prominently. It is significant that on his last visit to India, Chinese Premier Wen Jiabao stated that it would take a long time to settle the boundary issue. 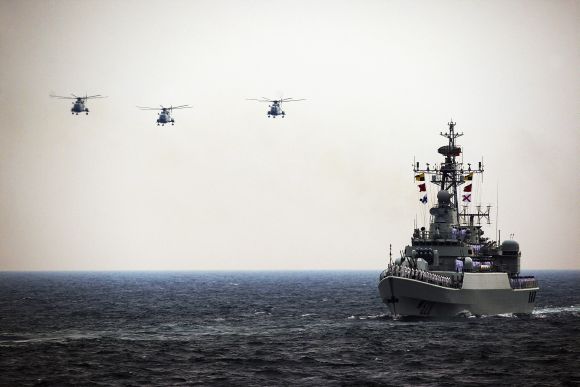 Currently India has the edge in terms of maritime capabilities but China is catching up rapidly. China's current focus is on acquiring dominance in the Yellow Sea, the Taiwan Straits, the East China Sea, and the South China Sea. 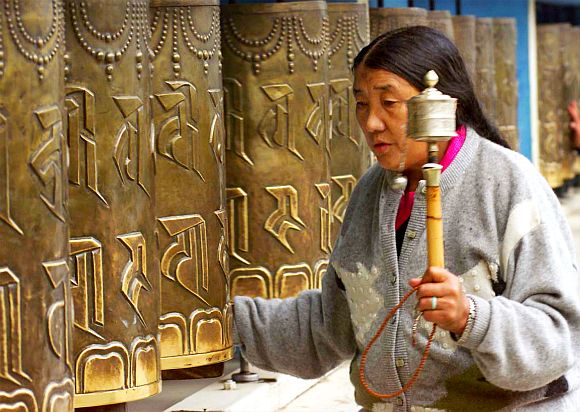 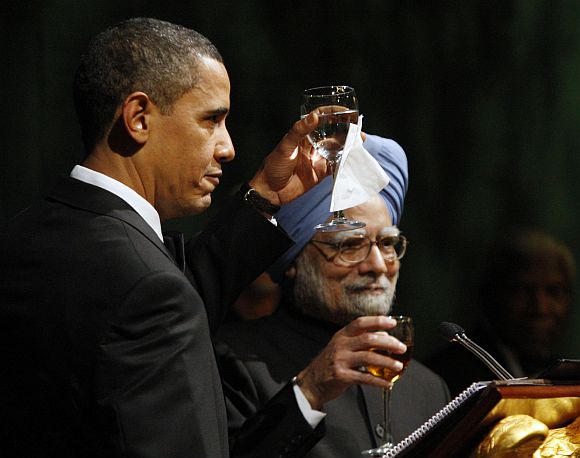 Image: US President Barack Obama and PM Singh make a toast during a state dinner at the White House, on November 24, 2009.
Photographs: Jason Reed/Reuters

On the global canvas, China looks upon India not as a threat in itself, but as a 'swing state' whose association with potential adversaries could constrain China.

India-China economic relations also present a complex and somewhat ambiguous picture. Bilateral trade is rising rapidly but asymmetrically, with a growing trade surplus in favour of China. We could respond by trying to limit Chinese penetration of our market, particularly our infrastructure market. 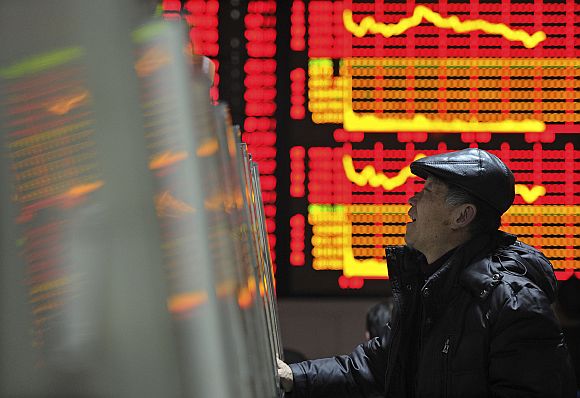 Image: An investor checks stock information with a computer at a brokerage house in Anhui province of China
Photographs: Reuters

One of the big concerns in our economic relations is the involvement of China's state-owned enterprises. Chinese banks are often able to offer preferential financing to Chinese companies because of their scale and because they are not driven solely by market forces.

How India should systematically respond to such issues is an important, open question. There is the additional problem of the potential for espionage and intelligence gathering through software means, which was evidenced by the banning of import of Chinese telecom equipment.

The growing trade surplus between India and China has been a cause for concern owing both to its degree and composition. Not only is the degree of dependence of Indian industries on Chinese imports on the rise. But India's main exports seem to be natural resources, whereas its imports are largely higher end manufactured goods. 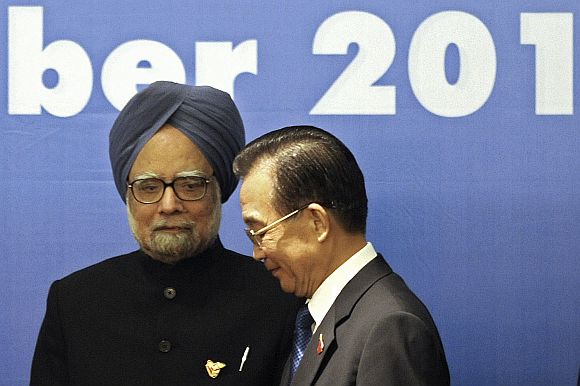 One area where India may be able to bargain effectively with China is the domain of technology transfer. The ability to leverage access to our markets in order to secure access to sophisticated technology, and so develop domestic capacity is something India has not been able to do as effectively as it needs to, especially with developed countries.

For example, when an airline company like Indigo signs a $16 billion (around Rs 83,200 crore) deal with Airbus, technology transfer should be a part of the terms of negotiation. Even India's defence offsets have been quite disappointing in terms of technology transfer, with only the lowest value addition activities being sourced domestically.

China has managed to do this quite well, mainly because the government is able to coordinate the actions of various companies (many of which are state-owned), while India does not have this luxury. It may in fact be easier to negotiate technology transfer deals with China than other developed countries, which are intensely possessive about their intellectual property.

Given the current and future asymmetries in capabilities and influence between India and China, it is imperative that we get this balance right. This is perhaps the single most important challenge for Indian strategy in the years ahead.