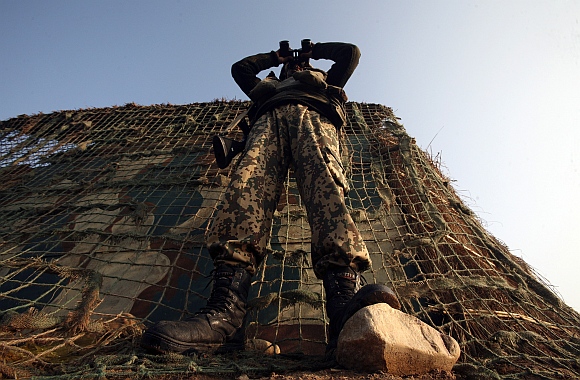 Image: A Border Security Force soldier looks through a pair of binoculars outside a bunker near the fenced border with Pakistan in Suchetgarh, southwest of Jammu
Photographs: Mukesh Gupta/Reuters Alok Bansal in New Delhi

The timing and mode of the attack in which two Indian soldiers were killed unambiguously point towards the complicity of the Pakistan military leadership in this misadventure. After all just a few months back Pakistan Army chief General Ashfaq Kayani was all for peace. The solution to this riddle lies in the political developments within Pakistan, says Alok Bansal

The recent killing of two Indian Army soldiers in Poonch sector across the Line of Control and subsequent decapitation of one of the bodies has expectedly raised the temperatures in both the countries. Skirmishes and firings across the LoC despite the ceasefire are nothing new and have been going on for a number of years, but the latest incidents were not ordinary and need greater analysis.

Firing is usually resorted to by Pakistani troops to facilitate infiltration of militants across the LoC. However, January is not the month for infiltration. The weather does not allow for movement across high mountain passes and as such this time of the year is generally not used for infiltration.

The Pak army is stretched thin 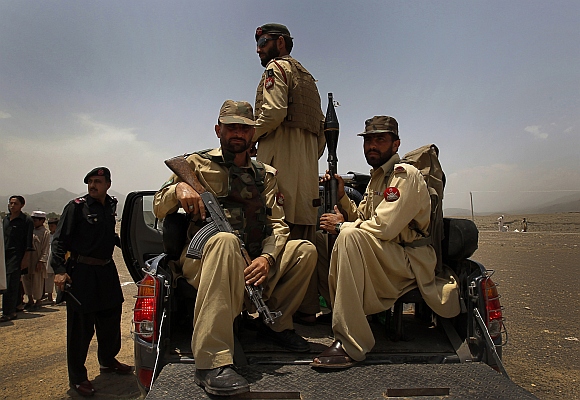 More significantly, the Pakistani troops took extra risk in crossing the barbed wire fence and indulged in barbaric and inhuman acts of beheading an Indian soldier.

Although there has been a history of such macabre killings by Pakistani troops, the sheer brazenness of the attack and the timing was unique and was intended to provoke the Indians. The Indian response, which led to the alleged killing of another Pakistani soldier, was along expected lines.

Some Indian and Pakistani commentators have tried to justify the Pakistani action, terming it as a response to an alleged Indian attack on a Pakistani post, however, if the intent was just retaliation; that could have been achieved by firing across the LoC.

The Pakistani army would definitely not take such a grave risk merely for a routine tit for tat attack, especially at a time when the Pakistan army has been stretched thin. Not only is it deployed in FATA and Swat valley, it is also fighting the Baloch nationalists and assisting the Election Commission of Pakistan in carrying out fresh delimitation in Karachi.

Elections are likely to usher in PML-N 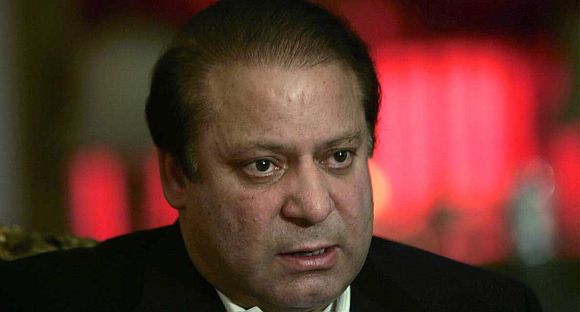 What then was the motive behind a unit of Baloch Regiment (Kayani's own regiment) undertaking such a despicable and hazardous mission to provoke the Indians? The timing as well as the perpetrators of the crime unambiguously point towards the complicity of the Pakistan military leadership in this misadventure.

After all, just a few months back, Kayani was all for peace. The solution to this riddle lies in the political developments within Pakistan.

For the first time in history, there is a possibility that a democratically elected government in Pakistan will be replaced by another democratic government through elections and this process will definitely entrench democracy in a country where it has traditionally been just a passing phenomenon.

More significantly, as per the current trends, the elections are likely to usher in Pakistan Muslim League-Nawaz led by Nawaz Sharif to power.

The Pakistani establishment (read military) firstly does not want the nascent democracy to strike roots by changing governments through ballots and more significantly does not want Sharif, who it views as irreconcilably hostile to the khakis, to come to power.

The establishment is now trying to defer the elections 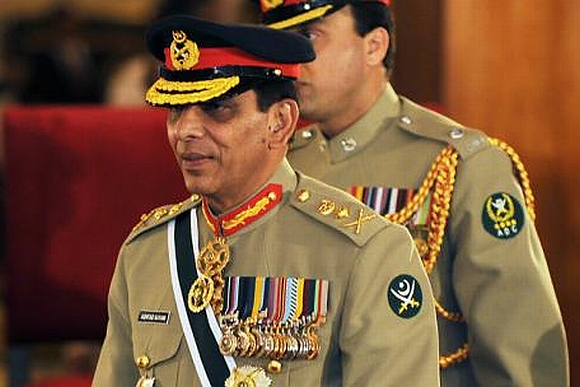 In order to prevent Sharif, it has been bringing in newer actors and issues on Pakistan's political landscape to erode his support base. It tried to build up Imran Khan, but after the initial euphoria, he seems to have run out of steam. It also tried to raise the issue of Seraiki province to cut the support base of Sharif, but has largely failed.

The establishment is therefore now trying to defer the elections itself and has co-opted the election commission and the judiciary. Consequently, the supreme court has ordered fresh delimitation of constituencies in Karachi, even though the last delimitation was carried out after the last census (1998) report and 2011 census report has not been made public.

It has ordered the election commission to carry out door to door verification of voters in Karachi with the army's assistance. The aim was probably to provoke Muttahida Qaumi Movement, which controls Karachi, to create mayhem and defer elections.

It subsequently brought in Allama Tahir-ul-Qadri from Canada to demand dissolution of assemblies and setting up of a caretaker administration with elements from the military and judiciary. He also wants elections to be postponed indefinitely. 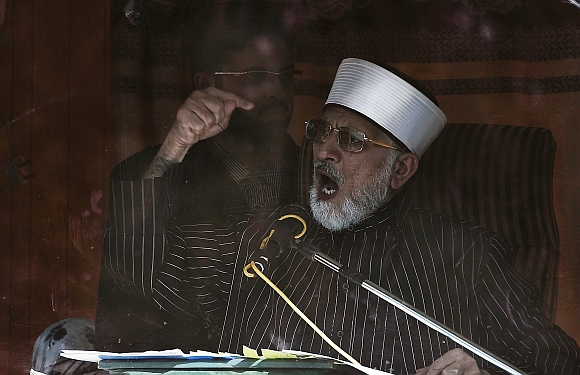 Image: Sufi cleric and leader of the Minhaj-ul-Quran religious organisation Muhammad Tahirul Qadri addresses his supporters from behind the window of an armoured vehicle on the second day of protests in Islamabad
Photographs: Zohra Bensemra/Reuter

Simultaneously the Pakistan army has indulged in this heinous crime to aggravate tensions with India and use it as a pretext to postpone the elections, should Dr Qadri fail in his endeavour. The future reaction of the Pakistan army will therefore depend on the outcome of the drama being enacted in Islamabad.

The Indian army has rightly announced its decision to reserve its right to respond at a place and time of its choosing. The Indian government should highlight the barbaric and inhuman behaviour of the Pakistan army, as many in the west still consider it to be a professional army capable of being entrusted with the security of Afghanistan.

It would however, be counterproductive for the Indian government to withhold talks with Pakistan as that would amount to playing in the hands of the 'Pakistani establishment'. In fact the talks must be used to force Pakistan to accord the MFN status to India, which it had promised, but has been withheld at the behest of the all powerful establishment.

Alok Bansal is a New Delhi-based political and security analyst.