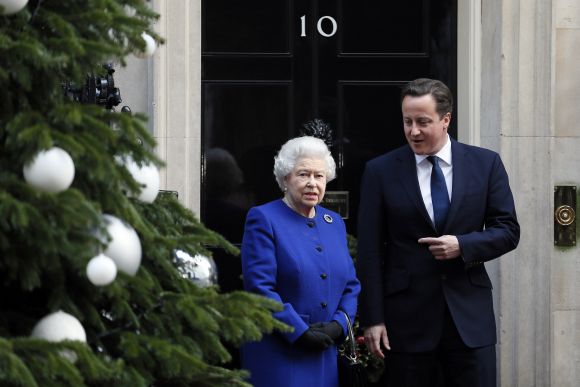 Queen Elizabeth II, celebrating the diamond jubilee of her reign, on Tuesday scripted history when she attended a cabinet meeting in 10 Downing Street, becoming the first British monarch since 1781 to do so.

British Prime Minister David Cameron greeted the 86-year-old Queen at the door of Number 10, posing for photos before going inside.

She met ministers, who presented her with a gift to mark her Diamond Jubilee after 60 years on the throne.

She sat in the prime minister's usual seat -- with Cameron and Foreign Secretary William Hague sat either side. 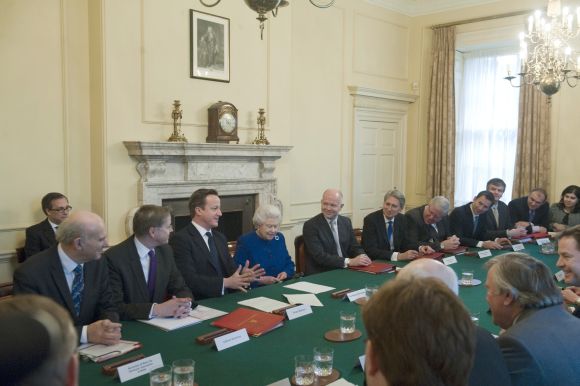 It is believed to be the first time a monarch has attended peace-time cabinet since George III in 1781. George I ceased to chair cabinet in 1717.

Once inside, the Queen was introduced to each of the government's senior ministers in turn, as they bowed.

After the Queen and the cabinet had taken their seats, Cameron formally welcomed her to the meeting and outlined the items of business on the agenda.

It began with Chief Whip Sir George Young talking about the change to royal accession rules, to allow a first born girl to become head of state even if she has a younger brother.

There were also updates on the forthcoming parliamentary business and Ken Clarke spoke about prospective justice measures, the BBC reported. There was a much larger than usual presence of journalists opposite No 10, although no questions were shouted at the Queen as she arrived.

While the Queen is head of state, her involvement in day-to-day political decisions is largely formal.

Earlier, Cameron's spokesman said the Queen would spend about 30 minutes at the meeting.

The spokesman said he imagined she would speak, despite being described as an observer.

Professor Jane Ridley, biographer of Edward VII, said Queen Elizabeth attending the Cabinet meeting was "testimony of the Queen's ability to elevate the monarchy above politics" that she could attend cabinet.

It was a "constitutional landmark", she added.

10 Downing Street, is the headquarters of Her Majesty's Government and the official residence and office of the First Lord of the Treasury, an office now held by the British Prime Minister.