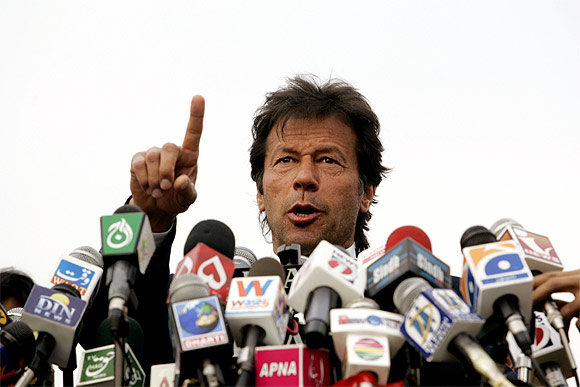 Sheela Bhatt, who visited Islamabad and Lahore to cover the visit of External Affairs Minister SM Krishna to Pakistan last weekend, returned with these impressions of the neighbouring country who India is trying to befriend after more than half a century of mutual hostilities

Cricketer-turned-politician Imran Khan, who saw a meteoric rise in his political fortunes, seems to have plateaued of late. While the Indian establishment never thought much of his political potential, the media in New Delhi and the West went gaga over him as if he was the king-in-waiting. So what went wrong?

The assessment in Islamabad is that he was not able to consolidate the gains he earned through some giant public rallies. He selected some aides in his core group who do not enjoy credibility. Even the few editors who supported him, and in fact went out of their way to do so, are feeling left out. In Pakistan, the support of a few elite editors, or the lack of it, is never underestimated by new and old politicians.

Imran's opulent house on the hill in Islamabad, which he calls "Paradise", is a rage on YouTube and speaks volumes about his doubletalk when he criticises Nawaz Sharif's mansion in Lahore.

In Islamabad, every political pundit talks about the new coalitions of political parties that are likely to emerge. It is difficult to say what the final shape of these alliances will be but, as in India, the final formations of political groupings will decide the outcome of the next general election.

President Zardari on his splendid island 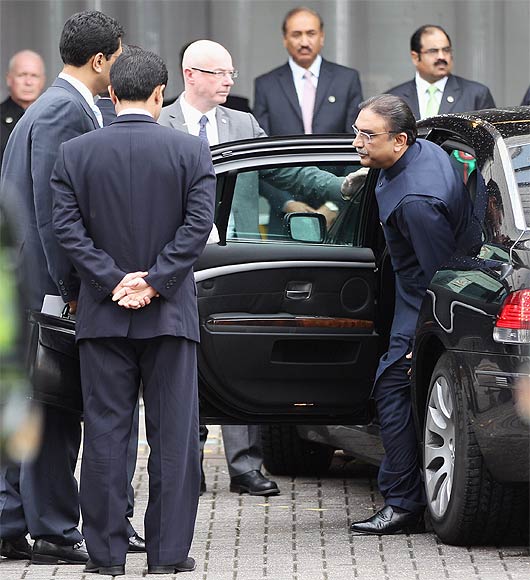 Why is Pakistan not handing over Dawood Ibrahim to India, and why is it refusing to proceed seriously against Hafeez Saeed, prime accused in the Mumbai terror attacks? A reasonable question, you will agree, but it got quite a shocking reaction. A young Urdu reporter, with a native sense of Swat valley, told rediff.com, "How can you ask Pakistan to give away their bombs?"

A senior journalist from the Jung group of publications, while giving a car ride in Islamabad to Indian journalists, quipped while driving past President Asif Ali Zardari's House: "Our President's writ runs only on this island called President House."

Pakistani journalists supportive of peaceful relations with India ask the Indian media to exercise restraint while assessing Pakistan. Their argument goes like this: Pakistan is passing through unusual times. It is a rare event that the civilian government is about to complete its five-year tenure in spite of so many hurdles. The process is on to grab the turf, however small, from the military establishment (which is essentially the only stumbling block in a peaceful India-Pak relationship). The media restraint will help the civilians-led democracy in Islamabad which, in turn, will help India and the region.

Also, for the first time in the history of Pakistan more than five cases are being heard in the courts against the all-powerful military establishment. Military men in uniform are in the dock in the Supreme Court facing humiliation at the hands of strict judges. This is unheard of in Pakistan since 1947.

'It is Ksaab, as in butcher, not Kasab!' 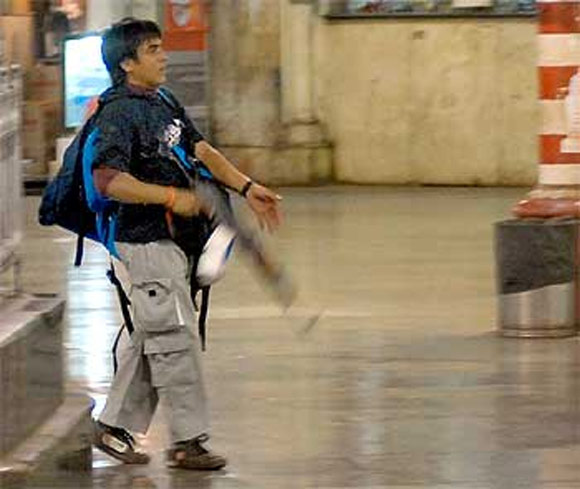 Image: Ajmal Kasab during his macabre killing spree at Mumbai's CST on the night of 26/11
Photographs: Warrick Page/Getty Images

Not once but many times one heard from Pakistani politicians that the survey done by Pew Research Centre is "fishy". They quote lots of evidence from the ground to suggest that the reality is different and allege that Americans are the most hated in Pakistan and to reduce the impact of those real and dreadful figures, such "fake" surveys are carried out highlighting the "problem areas" between India and Pakistan.

Even a former high commissioner to India told rediff.com, "The Pew survey is mischievous. Just ignore it. Send your prime minister as soon as possible."

Hamid Mir, popular TV anchor who also contributes occasionally to rediff.com, expressed his concern over warming Pakistan-China ties. He was totally in sympathy with the Balochi people's opposition to Chinese presence in Gwadar port. There is newfound awareness in Pakistan about Balochistan.

Talking about cricket, Mir says, "It has been decided finally that India and Pakistan will play three T-20 matches and three one-day matches in India at the end of this year." He says Dr Singh must visit Pakistan to see how popular he is. Since many years, Mir believes, the main hurdle between Pakistan and India has been America. Mir is one journalist who gives tomorrow's news today.

Mir is a much-recognised face in Pakistan and in the Gulf region. When he was talking to rediff.com in the upmarket bazaar of Islamabad, he was constantly greeted by people.

Mir also told rediff.com that Indians pronounce Ajmal Kasab's name wrongly, which irritates many people in Pakistan. "Please don't say 'Kasab', pronounce it 'Ksaab'!" he says. "Ksaab means butcher. And, when you remind us of a butcher he will not get any sympathy."

While talking about the current level of terrorism, Mir said, "In Pakistan the peace constituency has increased as well as the jihadis. Squatting in the FATA area now are Chinese, Russian, Spanish, Kazakhstan and even Russian jihadis. Things are not any easier for the civilian government." 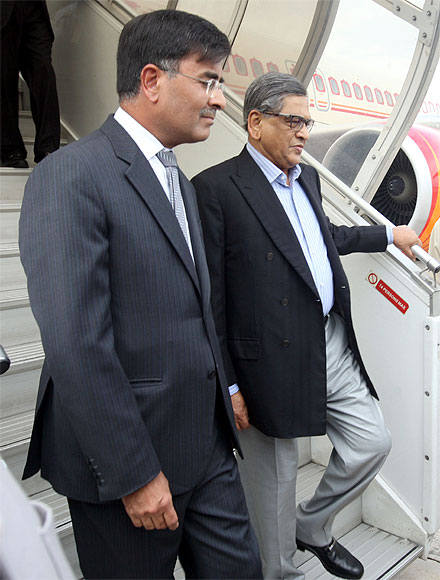 Members of the media, men and women, who accompanied Foreign Minister S M Krishna to Pakistan were delighted to meet and chat up with the country's rich and famous at Indian High Commissioner Sharat Sabharwal's party in Serena Hotel, Islamabad, in honour of Krishna's visit. All of them, in one voice, requested the Indian guests, "Send your prime minister. It will take the relationship many notches up. If he will not come during this government's tenure, it will send wrong signals to the large 'peace constituency' that has been created in Pakistan in the last five years. If India loses out on this opportunity then only Allah knows how the relationship will crash."

The story goes that President Zardari is worried that if his party's reign ends next year and if Nawaz Sharif's party comes to power, the latter may get the credit for many possible agreements that are ripe enough to be signed between the two nations, like the agreement on Sir Creek. And Zardari doesn't want to miss the date with history.

As it happens in India, the more you travel in Pakistan one finds new shades of human life, new information on its geography and new characters from its contemporary history.

Like you do if you read this series on Balochistan by Amir Mateen in The News.

He has written a series of more than 35 amazing reports. One of the incisive stories reveals the sorry state of affairs in Balochistan which has 65 members in its assembly. And out of them, 64 are ministers! Only one member is in the "opposition".

Amir Mateen writes, "Chief Minister Nawab Aslam Raisani has been extra generous in distributing the largesse. He has given an annual development fund of a whopping Rs 250 million to each of the 65 MPAs. This incidentally is over and above the ministerial perks and privileges extended to all MPAs except the assembly's unique one man-opposition, Yar Mohammad Rind. Here too is a story reflecting the prevalent dismal law and order situation in the province. Rind has never dared to enter the assembly premises since his oath-taking as he fears that the CM might get him killed to avenge his tribal killings."

Have you heard the songs of Nusrat Fateh Ali's spiritual heir? The fusion of Sufi and Spanish music by Faiz Ali Faiz is a treat on the ears.  Don't miss catching up on this slightly old link, or his new songs. 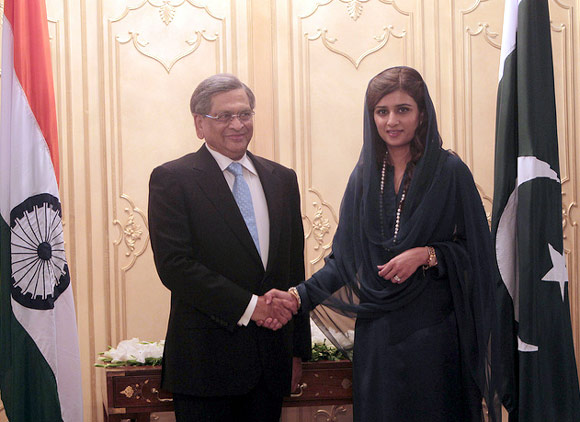 It is fun to see how Indian and Pakistani diplomats try so hard to hide their true colours (meaning, their hardline positions). They also try hard to ensure that the media in both countries only sing songs of peace, especially during high-level visits.

This is not to suggest that all peace talks are bogus, but it is delightful to see both sides wanting to chant "peace" but at the same time not wanting to "trust" each other at all. With great difficulty they are finding areas they can "agree before cameras" and create "news" to feed hungry journalists. Without really trusting each other, they want the "peace drama" to go on. That's nice, it's after all advantage both sides!

This hypocrisy, however, is a win-win situation for both sides. Since the peace is attempted so stylishly by the two warring neighbours, the Western world has stopped writing the usual bromides like '...Two nuclear neighbours... flashpoint Kashmir...' etc. Of course, the peace script goes awry sometimes.

But after Agra and Sharm-el-Sheikh, the Indian side has learnt the hard way that its Pakistani counterparts are smart cookies. So, this time, after the joint press conference when the perception went that Hina Rabbani Khar had scored over Krishna, the latter immediately came over to the Indian media centre for additional briefing. Thus was the day saved for Krishna and India. He even managed to convince some hawkish television anchors who were taking him to task for saying that "both sides should forget history and move on."

Krishna corrected the impression as best he could: "No compromise on 26/11! We won't forget the Mumbai attack!"

How entertaining to see the diplomatic doublespeak by the two sides who love to distrust each other!

Now, don't lynch us for speaking the truth. Hina Rabbani Khar, whom New Delhi's media is perennially gushing over, is a respectable lady in our eyes but, she must excuse us if we say that in real life she looks as good or as bad as our next-door neighbour.

The two pimples on her face say she is in urgent need of Ayurveda treatment for a poor skin. At the party hosted by Sharat Sabharwal, in spite of her Chanel bag (which she should not leave empty, for it then tosses in the air not so nicely) and satin salwar–kameez, she surprised us by her aam-aurat look -- that, however, changes so dramatically and beautifully on TV.

Our advice is, when one is using the brain so smartly, why highlight the gender unnecessarily? Agreed, Krishna is gaffe-prone but one is so sure that he will ferociously stick to India's stated position, always. As is the case with Khar. She can never dare to speak without the script provided by the military establishment of Pakistan.

Then why the hell this nonsensical comparison of Krishna, a charming old gentleman, and the feudal lady of Multan who only loves Western brands!