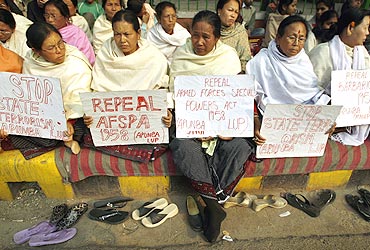 The Armed Forces (Special Powers) Act, 1958, or AFSPA, as it is commonly known, has been a subject of intense discussion and debate. AFSPA has been in force in the North-East and Jammu and Kashmir, and the 'draconian' law has been the reason of wide protests.

Pallavi Bedi of PRS Legislative Research, New Delhi explains some of the key provisions of the act, and the issues around it.

What is the Armed Forces (Special Powers) Act?

It was replaced by AFSPA on September 11, 1958. Currently, AFSPA is applicable to the seven states of the North-East, i.e. Assam, Manipur, Mizoram, Arunachal Pradesh, Meghalaya, Nagaland and Tripura.

AFSPA empowers the governor of the state, or the central government to declare any part of the state as a 'disturbed area', if in its opinion there exists a dangerous situation in the said area which makes it necessary to deploy armed forces in the region. 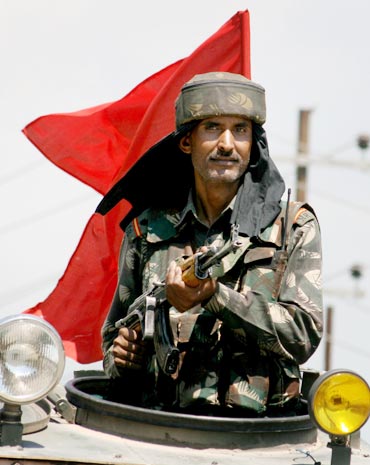 When did the act cover Jammu and Kashmir?

In the backdrop of the growing insurgency in Jammu and Kashmir, the Central government issued a similar enactment known as the The Armed Forces (Jammu and Kashmir) Special Powers Act, 1990.

It empowers the governor or the Central government to declare any part of the state as a 'disturbed area' if in its opinion special powers are required to prevent (a) terrorist acts aimed at overthrowing the government, striking terror in the people, or affecting the harmony of different sections of the peop#8804 or (b) activities which disrupt the sovereignty of India, or cause insult to the national flag, anthem or India's Constitution. 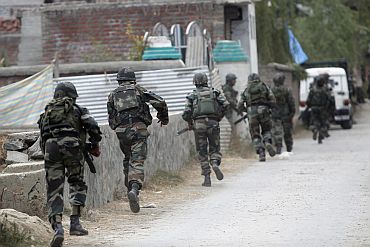 Image: Army soldiers run towards the site of gunbattle with suspected militants in Maloora on the outskirts of Srinagar
Photographs: Reuters

What are the special powers given to army officials?

Under Section 4 of the AFSPA, an authorised officer in a disturbed area enjoys certain powers. The authorised officer has the power to open fire at any individual even if it results in death if the individual violates laws which prohibit (a) the assembly of five or more persons; or (b) carrying of weapons. However, the officer has to give a warning before opening fire.

The authorised officer has also been given the power to (a) arrest without a warrant; and (b) seize and search without any warrant any premise in order to make an arrest or recovery of hostages, arms and ammunitions.

Individuals who have been taken into custody have to be handed over to the nearest police station as soon as possible.

Prosecution of an authorised officer requires prior permission of the Central government. 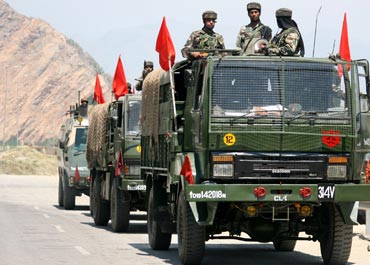 What has been the role of the judiciary?

In this judgement, the Supreme Court arrived at certain conclusions including (a) a suo-motto declaration can be made by the Central government, however, it is desirable that the state government should be consulted by the central government before making the declaration; (b) AFSPA does not confer arbitrary powers to declare an area as a 'disturbed area'; (c) the declaration has to be for a limited duration and there should be a periodic review of the declaration 6 months have expired; (d) while exercising the powers conferred upon him by AFSPA, the authorised officer should use minimal force necessary for effective action, and (e) the authorised officer should strictly follow the 'Dos and Don'ts' issued by the army. Has there been any review of the Act?

On November 19, 2004, the Central government appointed a five member committee headed by Justice B P Jeevan Reddy to review the provisions of the act in the north eastern states.

The committee submitted its report in 2005, which included the following recommendations: (a) AFSPA should be repealed and appropriate provisions should be inserted in the Unlawful Activities (Prevention) Act, 1967; (b) The Unlawful Activities Act should be modified to clearly specify the powers of the armed forces and paramilitary forces and (c) grievance cells should be set up in each district where the armed forces are deployed.

The 5th report of the Second Administrative Reforms Commission on public order has also recommended the repeal of the AFSPA.

These recommendations have not been implemented. 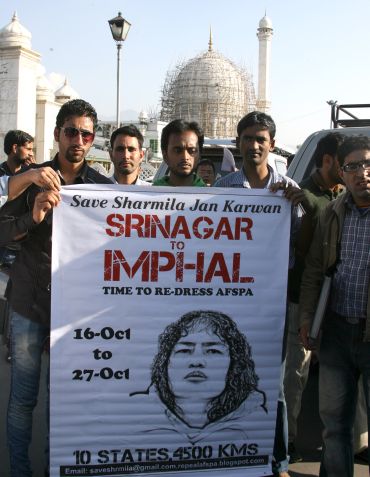 What is the present status of the Act?

In Manipur, Irom Sharmila has been on an indefinite fast for 11 years, seeking the repeal of the act in Manipur. Till date, the government has not agreed to this demand.

Recently, the Jammu and Kashmir government has asked for some parts of the state to be removed from the list of 'disturbed areas'. However, the army has opposed this and according to news reports, a compromise formula is being framed to be discussed at the meeting of the unified command (the highest decision making body on the security affairs of the state).

At the time or writing this post, the matter was still under consideration.