Sign in  |  Create a Rediffmail account
Rediff.com  » News » 'In Kashmir, everybody wants the status quo to continue'

'In Kashmir, everybody wants the status quo to continue' 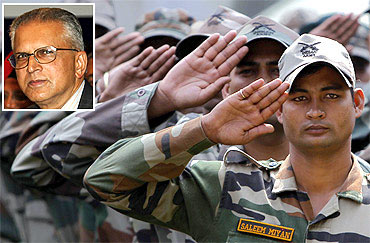 Image: Army men pay their tribute at the funeral of a slain officer in Srinagar and (inset) G K Pillai
Photographs: Danish Ismail/Reuters

Everybody has developed a vested interest in maintaining the status quo in Kashmir in spite of the fact that the ground situation there has improved, feels former home secretary G K Pillai.

In an interview with Bula Devi, he explains why the Armed Forces Special Powers Act need not be repealed, but it is high time the government considered lifting the Disturbed Areas Act.

The first of a two-part interview

How many times has the government set up committees to look into the Armed Forces Special Powers Act and what has happened to their recommendations?

Basically, the main review was by the Justice B P Jeevan Reddy Committee, which was set up after the Manorama episode (who was raped and killed in Manipur, which led to widespread protests). The committee even had a retired army general as a member and it gave a unanimous report. Surprisingly, the report has neither been accepted nor rejected by the government.

It has not been placed before Parliament also. Why?

It is because they (government) have not taken a view on it. It is still, as they say, under examination. But, I think there is a misunderstanding in the public about the AFSPA. The fact is that to impose the AFSPA, the state government has to declare an area as disturbed, whether in a district or the entire state or a part of a state. Normally they do it district-wise, they don't do it in the whole state.

So if an area is not declared as disturbed, the AFSPA doesn't come into play there. For instance, Manipur has declared that the Imphal municipal area is no longer disturbed and therefore, the army can't operate there.

I think it is the wordings in the act which has upset most people. It explicitly states 'fire upon or otherwise use force, even to the causing of death'. This is not true for any other act. Under the CrPC you can kill somebody in self-defence; somebody attacks you and you hit back; but nobody says you can kill.

'The army doesn't want any changes' 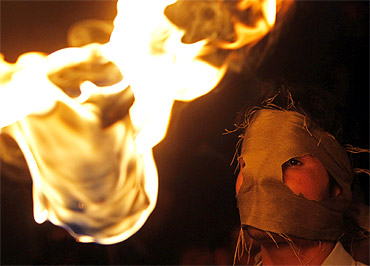 Yes, even though it is a war time hangover from 1942, in colonial days they were not sensitive about people's issues and it still continues here. The army doesn't want any changes because they feel that removal of the clause (to the extent of causing death) would imply they can't kill. Therefore, they want status quo.

Earlier activists could point out any number of human rights violations in Nagaland. Today, the state is incident free but the whole of the state continues to be a disturbed area and nobody talks about AFSPA.

In Manipur, people talk of the AFSPA because there have been some major incidents in the valley and the Meitei women, the Meira Paibis, have come out very strongly against it.

When an area is declared disturbed through a notification, which is a very powerful notification, it really means that the civil government has failed, the police has failed, paramilitary forces have failed and now the army needs to come in and do the job. The question is can any democratic government keep that notification forever and ever? That is the crux of the issue.

I think governments have been in one sense very indifferent, very callous and careless. They have allowed the disturbed area notification to continue because every agency prefers a status quo.

Manipur and Nagaland were restricted areas for foreigners. But when I was joint secretary, North East, I said foreigners must be allowed. But the agencies were unwilling. I stuck my neck out and insisted on lifting it. I got some relaxation in some districts of Nagaland, some circuits of Manipur and so on.

I remember the then home secretary Kamal Pandey saying, 'everybody is against it, you stick your neck and if anything goes wrong your neck will be in the firing line'. I said I am willing to take that (risk). Nothing happened; no foreigner was killed or found spying.

'Why does one need to repeal the AFSPA?' 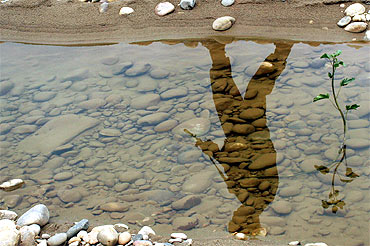 Image: The reflection of a soldier is seen in a puddle
Photographs: Amit Gupta/Reuters

There is confusion about what will happen if a Disturbed Areas Act is denotified.

If it is said that certain areas are not disturbed it means the Disturbed Areas Act doesn't apply in those areas any longer and when the (Disturbed Areas) Act is lifted, the AFSPA is also lifted. The army won't operate in those areas because under the AFSPA, all the protection that the army gets and the actions they can take under its provisions won't be available to them.

Why does one need to repeal the AFSPA? Keep the act, one may need it on some other occasion, one cannot make another act again. The notification for disturbed area is just a gazette notification which can be done in an hour or so. If the situation in an area improves, it is lifted; if the situation worsens in that area, it can be imposed again.

Is the army vehemently opposed to lifting of the AFSPA from an area because they won't have the protection of the act?

Yes, the army won't have the protection, which is the main point. But my argument is different. My point is that if the situation has improved, why doesn't the government say that the area is not disturbed any longer?

Like what (Jammu and Kashmir Chief Minister) Omar Abdullah is saying?

Yes. In fact, he started it almost a year ago. Last September, the Cabinet Committee on Security said let's move for relaxation of the disturbed areas. They made the reference and a communication went to the Unified Command, which set up a sub-committee, etc. But the army is just sitting on it; everybody wants the status quo to continue. See, over a period of time everybody has developed a vested interest in this.

'Army has thousands of acres in Srinagar' 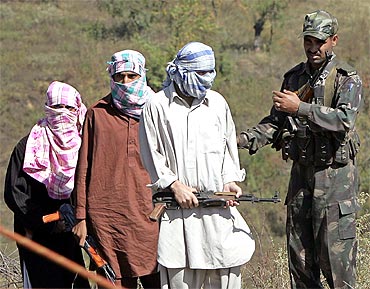 What kind of vested interest?

One of the biggest owners of land in Jammu and Kashmir is the army. Like in Delhi, it has a big cantonment. But here nobody is bothered because Delhi is expanding with Gurgaon etc. But if you go to the Srinagar cantonment area, you will ask why does the army need so much land?

Srinagar is an urban city. But if one goes to downtown Srinagar, it is crowded, congested. If someone requires 10 acres or 50 acres of land where will he go? But the army has thousands of acres in the heart of the city.

If Srinagar is peaceful and the state government says it can handle the situation, the army can move out to some other place and release those 2000-3000 acres of land. With this land, about 10,000 people from downtown Srinagar can be relocated and given good housing as everywhere there is a pressure on land.

In Tripura, in the heart of the city, the Assam Rifles has 50 acres of land whereas there is no sports stadium and such things in the whole of Agartala. So the government said we have identified land outside, you give us this land, why do you want it in the middle of the city? As joint Secretary, North East, we shifted out Assam Rifles from the middle of Aizwal to a place 20 kms away. Why should they be there when Mizoram is a peaceful state? This is like having an army cantonment in the middle of Connaught Place.

It is. People did not understand, they said it is real estate, politicians will sell the land. They said all that without realising that Kangla Fort is a very emotional issue for the Meiteis and that no chief minister of Manipur can touch even one inch of the Kangla Fort, they will kill him. Now it looks so beautiful; it is coming up so well, it's a great place for people to visit. It has been almost seven years now, not an inch has been given to anyone.

Read Part 2 of the interview on Thursday