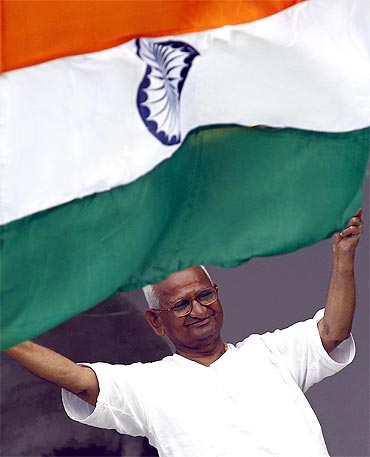 Team Anna on Friday made it clear that a mere discussion in Parliament will not serve any purpose and the Gandhian will not call off his fast till Parliament passes a resolution that the cleared Lokpal Bill will include the three contentious points raised by them.

He said Hazare had made it clear that he will break his fast only if Parliament passes a resolution "adopting or indicating clearly" that the Lokpal will include the three issues.

'We have discussed the bill for 42 years' 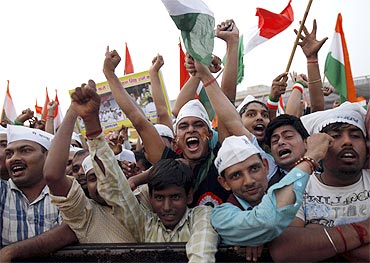 "Therefore, we need to see what Parliament does on this. There is no point in just discussing it. We had discussed it for the past 42 years and eight times it was introduced in Parliament," Bhushan said.

The government had earlier said that a discussion on the Jan Lokpal Bill, as demanded by Hazare, may not be possible in Lok Sabha during the day. There were reports that some legislators had given notice for discussion on the Lokpal issue under a section which does not entail voting.

Government sources on Thursday night said that a motion will be brought to facilitate a combined discussion on the Lokpal Bill, the Jan Lokpal Bill and the drafts prepared by activists Aruna Roy and Jai Prakash Narain. 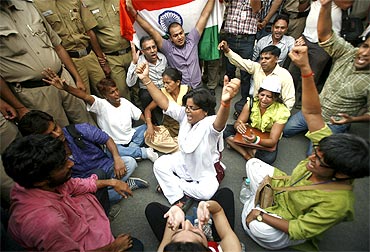 Addressing protesters at Ramlila Maidan where Hazare is sitting on an indefinite fast, former IPS officer and Hazare's aide Kiran Bedi echoed Bhushan's views and said Hazare will end the fast once Parliament passes a resolution which includes the three sticky issues -- all civil servants should be brought under Lokpal, a Citizen Charter should be displayed at all government offices and all states should have Lokayukta.

Activist Medha Patkar, a member of the core committee of Team Anna, said everything was going right till Thursday, but now the government had changed its stand.

'If the UPA wants to commit suicide, let them' 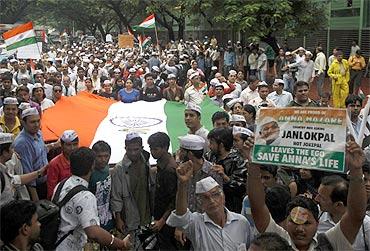 "This is a big opportunity for the UPA but if it wants to commit suicide, let them," she told reporters.

She also criticised the choice of government mediators, saying those appointed to talk to Hazare should have a clean image.

"The government should appoint people with a clean image as mediators. (Law Minister) Salman Khurshid is fine. (Maharashtra Chief Minister) Prithviraj Chavan is fine. But one should not forget that Union Minister Vilasrao Deshmukh has been accused of irregularities in the Adarsh scam," she said. 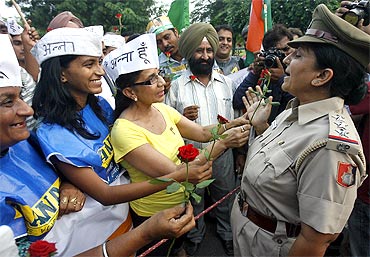 Khurshid is one of the members of the government's negotiating team led by Finance Minister Pranab Mukherjee, which also has East Delhi Member of Parliament Sandeep Dikshit as a member.

Deshmukh had met Hazare on Thursday as the government stepped up efforts to end the stand-off on the Lokpal Bill.