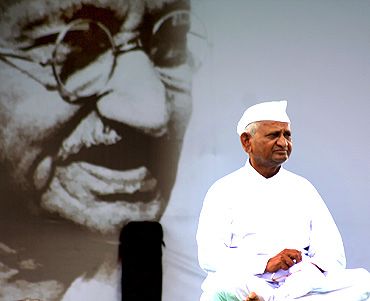 I applaud him. I salute him, said Prime Minister Manmohan Singh in Parliament on Thursday while speaking on Anna Hazare and the issue of corruption.

He appealed to Anna Hazare to end his fast. He categorically agreed that Anna has made his point. The political gesture came too late but there is no denial that with his speech the United Progressive Alliance government is trying to get back the grip over the situation.

The kind help of Bhartiya Janta Party and other parties have also contributed in rescuing the government under seize.

The UPA government got a lifeline in form of the 57-words resolution of the all party meeting. Only after getting vibes from political parties, the government got back its confidence to take on Team Anna.

Congress will not dare to claim victory 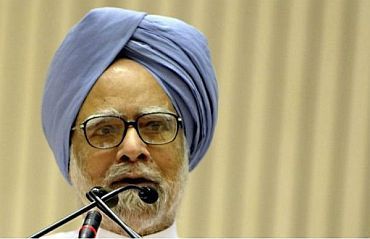 In the last 10 days, the Indian parliamentarians have received humiliation from the aam admi. They have lost face like never before, as they saw footage of flowers kept outside Finance Minister Pranab Mukherjee's house.

If one of the most respected members of the House gets a taste of Gandhigiri, then times have changed, indeed.

As, reportedly, Aamir Khan's idea to gherao members of Parliaments' homes caught up with protesters, India's political class got irritated and some panicked. Congress MP Sanjay Nirupam quickly wore a Gandhi topi printed with 'I am Anna' slogan when Hazare's supporters thronged his house.

Today, Parliament is likely to debate three Lokpal bills. Anna Hazare is likely to break his fast. Hazare, his team and his supporters will count losses and gains.

The Congress will not dare to claim victory because it can be termed only Pyrrhic victory after losing credibility for arresting Anna Hazare, jailing him in Tihar, and then releasing him the same day.

However, no one should underestimate the act of Parliament to take up the Jan Lokpal Bill.

Aruna Roy, Jaiprakash should thank Anna instead of govt 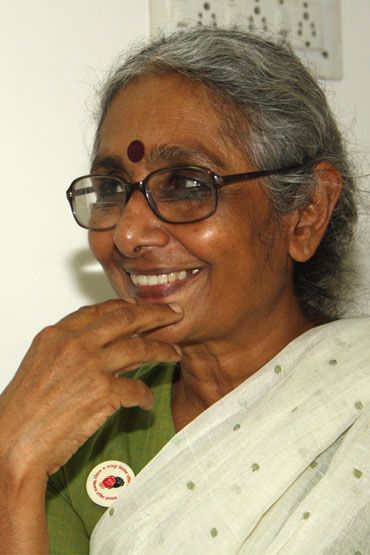 It's not same as Hazare's demand of getting the Jan Lokpal Bill passed before 31 August. But, Anna Hazare's lowering of wish list has become irrelevant after PM Singh's speech which has clearly said that Hazare has registered his point.

If the Lok Sabha debates Hazare's bill, it will be his victory that rarely comes in a system that thrives on status quo.

The government has just added two other Lokpal bills to soothe its own ego, before agreeing to Hazare's demands. Without Anna's fast and people's support to him, Aruna Roy or Jaiprakash Narayan's bill would have never entered Lok Sabha so, royally. They should rush to thank Hazare and people who supported him, not the government.

Now, there is no doubt even in government that Hazare's fast has injected urgency to the issue of corruption. And, PM's political move has helped cool down the temperature.

PM Singh, his cabinet and his party hates the Jan Lokpal Bill, but they have been forced to learn new steps in the dance of democracy that is on display in Ramlila Maidan.

The government has enough material, think many ministers, to question Arvind Kejriwal, Kiran Bedi and Prashant Bhusan. But still, in the last couple of days, one saw that government looked beyond these so-called allegations of 'blackmailing by fast', doubtful funding of NGOs run by Kejriwal and "ordinariness" of the leaders on stage at Ramlila.

Why did the government turn humble? 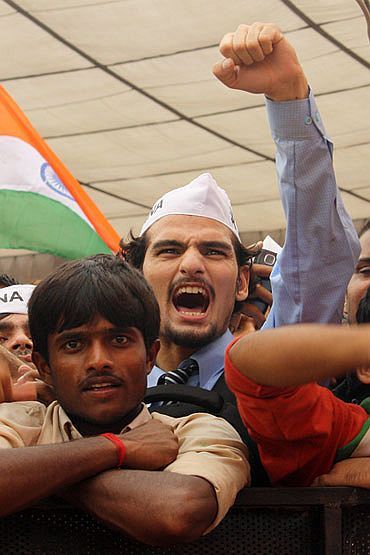 There is no doubt that Hazare and his ultimatums over the Jan Lokpal Bill have become a large issue. In the last few days, ordinary people, who are not supportive of Hazare, have also become aware of the prevailing corruption.

The middle class, which was more interested in getting affordable housing, cheap discounts at malls and discounts on the package tours, have started talking about corruption and politics. They were never looking for a perfect Gandhi to be born, again.

At Ramlila Maidan, at the counter where information was provided to protesters, I saw more than 1,000 letters. Some of them I could read. It gave a vivid account of corruption in Bikaner, Jhansi, Kanpur, Jammu, Surat and Indore. People came to the desk with hand-written letters, xerox copies of their issues. All of them addressed their complaints to Hazare.

The significant point made here was that since the Congress party is ruling at Centre and it has a certain history of governance in recent times (2G scam, etc.) the charges of corruption is sticking.

Hundreds of young people in the country are leveling these charges and that is what has been hurting the party and the government.

In the most colourful ethnic language, politically damaging slogans were coined against the Gandhi family, government and the Congress party.

Price rise to bomb blasts were linked to corruption in the government. A big hoarding stating that Rahul Gandhi is having Italian citizenship is put up near the gate for media people at Ramlila.

Even 'Anna-haters' have listened to him 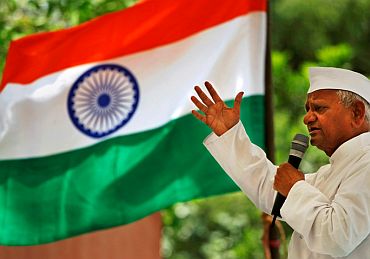 Even though Hazare may not break his fast as per the terms he had laid out, the much bigger issue was the shaping up.

First time and second time voters were screaming, dancing and rushing before cameras with anti-Congress one-liners.

In view of high possibility of anti-corruption tamasha turning into anti-Congress agitation, PM's speech was necessary and it could not have been any different than what he said, the way he said.

Quite right. He can't stand Hazare's methods. He is not supporting at all the Jan Lokpal Bill of Team Anna. He and his Cabinet has rejected it and sent their own version to the Parliament which is now with the standing committee. Hazare's agitation or movement, whatever one calls it, was against his government's Lokpal Bill.

I commit our government to working with all sections of the House to realise this dream. Therefore, I urge all Members of the House to join me in making an appeal to Shri Anna Hazare that he has made his point. It has been registered with us. I respect his idealism. I respect him as an individual. He has become the embodiment of our people's disgust and concern about tackling corruption. I applaud him, I salute him. His life is much too precious and therefore, I would urge Shri Anna Hazare to end his fast."

Hazare will not go back to Ralegaon Siddhi empty handed even if his Bill is not passed and PM Singh and other members of Lok Sabha don't approve of ideals on which draft of Jan Lokpal Bill was written.

But Hazare has registered his point. The country, including the 'Anna-haters' have listened. In the democracy, like the one India has, what more a citizen can ask for?