Young ministers offer to quit and work with Rahul

Rahul Gandhi's elevation to the Congress vice-presidency has made some senior leaders jittery. Renu Mittal reports from Jaipur.

It was the Congress party's 'Obama Moment,' the coming of age of Rahul Gandhi.

For over 40 minutes, speaking alternatively in English and Hindi, the new Congress vice-president kept hundreds of Congress leaders spellbound, shifting from the written page to the extempore, as he mixed emotion with hardcore politics.

As he spoke, many leaders on the dais, including his mother, Congress President Sonia Gandhi, were clearly moved by the speech's tenor and tone.

One senior leader described the speech as "24-carat gold". It clearly had the expert touch of a master wordsmith. By all indications, Rahul writes his own speeches and is known to consult sister Priyanka who reportedly flew to Jaipur on Sunday and was present at the convention where her brother was elevated to the Congress vice-presidency.

Rahul received a standing ovation when he said power was poison. And he received huge applause when he spoke about the corrupt attempting to eradicate corruption and about those who exploit women every day and then speak about women's rights.

He stressed the need to put systems in place, of putting India on the world map where it is taken seriously, and of becoming a party, which can produce and groom leaders for the future so that at any time there are innumerable candidates for chief ministers' and prime minister's positions.

In his first speech as vice-president, Rahul was emotional in what is being seen as a leaf taken out of US political speeches, where emotion and the personal touch coupled with programmes and policies, and an informal communicative approach lets the speaker connect with his audience.

Some swift changes are on the cards as a number of leaders have offered to quit their ministerial responsibilities and work with Rahul Gandhi. Union Corporate Affairs Minister Sachin Pilot is learnt to be the first to have offered to work with the new VP.

Rahul appears determined to put in place his own brand of politics, which appears to differ from his mother's politics, both in terms of style and substance.

While there was enthusiastic welcome for his speech on Sunday, the party's senior leadership appears jittery with Rahul focusing on the need for responsibility and accountability and the need for leaders to deliver or be eased out. 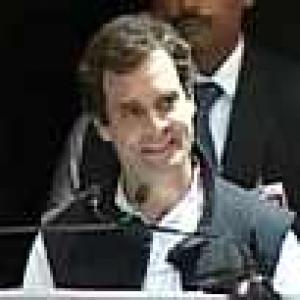 Rahul: Last night, my mother came to my room and cried