Farmers' group went on a maun vrat (vow of silence) during their fifth round of talks with the government and sought a reply in 'yes' or 'no' on their key demand of repealing the three new farm laws, union leaders said. IMAGE: Representatives of various farmer unions on a maun vrat during their fifth round of talks with the government on the three new farm laws in New Delhi,. Photograph: PTI Photo

As their meeting with three union ministers, including Agriculture Minister Narendra Singh Tomar, continued for nearly four hours, farmer leaders told the government to reply in "black and white" that whether it will repeal the laws or not.

Kavitha Kuruganti of All India Kisan Sangharsh Coordination Committee said the government was not responding to the pinpointed question of farmer leaders.

Gurlabh Singh Mahal, legal advisor to Punjab Kisan Union, also said the farmer leaders wanted the government to answer in 'Yes or No'.

Some farmer leaders present in the meeting were seen putting finger on their lips and holding a paper written 'Yes or No' on that.

"All members of delegation have decided to keep silent. The government side is trying to draw us out. But there is utter silence from our side," Kuruganti said. 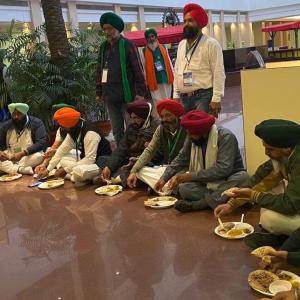