'Seeing our plight, our children no longer want to become farmers'

As thousands of farmers dig their heels in at Delhi's borders bracing chilly winter winds and preparing for a long fight to press for their demands, some rue that seeing their plight, their children no longer wish to get into agriculture. Hasseb Ahmed, who has been on a sit-in against the Centre's new farm laws here at the Ghazipur border since last Saturday, says he has two school going children, who are busy with their online classes back in his village in Rampur district of Uttar Pradesh, want a better standard of living.

His elder son is in Class 12, while the younger is in class 9. "Neither of them wished to get into farming. They have their ambitions and want to land a good job. They say they don't want to be farmers," Ahmed said.

"With the price that we are offered for our crops, all we can afford to give them is food and basic education. Nothing beyond that. They get disappointed to see that despite all the handwork that goes in it, we don't receive appropriate returns," he added.

Another farmer, Sita Arya, who is from Amroha district in Uttar Pradesh, said her children too were slowly trying to detach themselves from farming. "They are even ready to sit in a bidi, tabocco or a paan shop to earn a living."

"We work day and night on the fields but don't get the required profit. Getting into farming is like falling into a pit. Unless there is profit, our children don't wish to get into it. If only the government had focused on turning farming into an employment opportunity and set a standard price for our crops, our children would not have been so against this profession, which is in every sense the backbone of this country," she added.

Agitating farmers have stressed that unless their demands are met and the new farm laws repelled, they will not move anywhere from the borders of the national capital and their protest will continue.

Daryal Singh, a 65-year-old farmer from UP, pointed out that the young people in his village were ready to work even under a trader for Rs 2,000 but they do not wish to become farmers.

"For ages they have seen their families struggle to get farm loans. Whatever money they make out of farming, a good portion of it goes into repaying the loan, and they are left with a meagre sum. How do we change their perceptive? Has any government ever acted for the farmers till date," he asked. 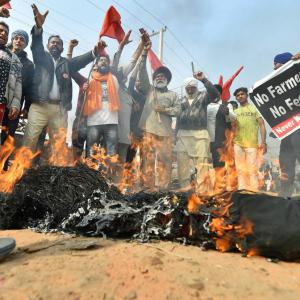