Karnataka Bharatiya Janata Party strongman B S Yediyurappa on Wednesday indicated the possibility of a bigger role for his son and the state vice president BY Vijayendra in the party, a day after he was denied a ticket to contest the MLC polls. 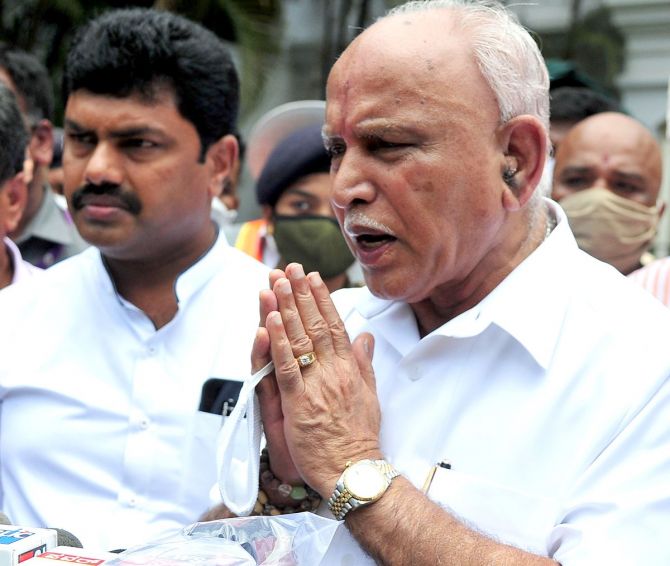 Meanwhile, accusing the Congress of politicising the issue, Vijayendra in Mysuru said Yediyurappa has never expressed desire to make him MLC or a Minister, and the party leadership would decide on how to utilise him.

"I'm not bothered much as the state and national leadership will take a call on what responsibility should be given to me," Vijayendra said, brushing aside talks in some quarters that Yediyurappa is being sidelined in the party.

Ignoring the recommendation of the state unit to field Vijayendra for the June 3 biennial elections to seven seats of Karnataka Legislative Council, the party central leadership on Tuesday announced names of four candidates, hours before the deadline for filing of nominations ended.

The move is being seen in some political quarters as a setback to former Chief Minister Yediyurappa.

"There is no need to attach special meaning to Vijayendra being denied a Legislative Council ticket. I'm confident that naturally Vijayendra will get a big opportunity in the future. Party will never let down those with capability and loyalty," Yediyurappa said on Wednesday.

Speaking to reporters in Bengaluru, he said, the aim is to bring the party back to power in Karnataka in the 2023 assembly polls, and all efforts in this regard will begin from 'now itself'.

"I'm confident that the BJP will get a clear majority under the leadership of Prime Minister Narendra Modi in the next elections, and come back to power," he added.

Asked whether Vijayendra lost out on getting the ticket because of BJP national General Secretary B L Santosh, who is considered to be Yediyurappa's bete noire, the veteran leader said, 'it has nothing to do with him, unnecessarily such things are being said in the media, and there is no meaning to it'.

He said Vijayendra may get different opportunities, pointing out that he is now the state Vice-President.

"He may be given a bigger opportunity, it is left to Prime Minister Narendra Modi and Party President J P Nadda. I'm confident that soon there may be certain changes and (he) may be given more responsibilities," he said.

Asked if Vijayendra would be given a ticket for next assembly polls, Yediyurappa said, "Why discuss it now itself, let's see when that situation comes."

The state BJP core committee had earlier recommended Vijayendra's name to the central leadership, as one of the probable candidates.

Vijayendra also did not want to respond to speculations alleging Santosh's role in him not getting a ticket, and said, "It is wrong to bring in names of senior leaders like Santosh ji, unnecessarily..."

With the party deciding against fielding him as candidate, Vijayendra on Tuesday issued an appeal and said power and position itself are not the ultimate objectives in politics.

Asking his supporters and well-wishers to abide by the party's decision, he also appealed against making any unnecessary comments on social media and elsewhere, following this decision, stating that it will not only damage the reputation of the party but also hurt the sentiments of Yediyurappa and himself.

According to party sources, the leadership decided against giving ticket to Vijayendra, as it wants to field him as a candidate during the 2023 assembly elections, and is likely to give him a greater role in the party like- state General Secretary- ahead of the polls, as a placatory move.

Earlier too there were reports that Vijayendra might be fielded to contest the 2023 assembly polls from one of the seats in the old Mysuru (south Karnataka) region, where the party is considered to be weak.

He too had recently stated that he is interested in working in the region, if the party decides.

There were some reports that Yediyurappa had desired to make his son an MLC and then insist on making him Minister in the Basavaraj Bommai cabinet.

There have been such demands from his supporters ever since Yediyurappa stepped down as Chief Minister in July last year.

The central leadership is also said to have decided against Vijayendra's candidature, as it will weaken the BJP's stand against dynasty politics, ahead of 2023 assembly polls, as Yediyurappa is currently a MLA from Shikaripura, while his elder son B Y Ragahavendra is Shivamogga MP.

Vijayendra was appointed as the party Vice President in July, 2020.

Before that he was appointed as BJP youth wing general secretary, soon after he was denied a party ticket to contest from Varuna constituency in Mysuru, ahead of the May 2018 assembly polls.

His stakes increased in the party as he was credited by many to have played a key role for BJP's first ever victory in K R Pet and Sira Assembly segments during the by-polls held in 2019 and 2020 respectively. 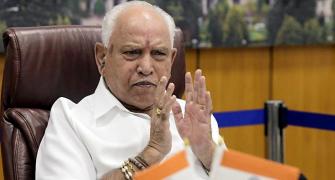