'No link between Karnataka ministers and Yediyurappa exit'

'Destabilising the Yediyurappa government is not a cakewalk.'
'If he is destabilised, then the BJP will have problems in Karnataka.' 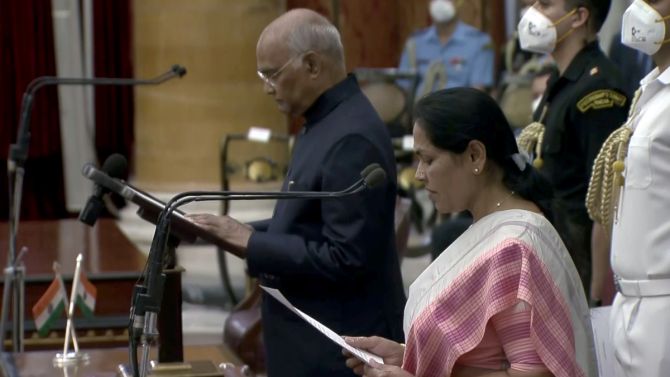 Shobha Karandlaje (MP from Udupi-Chikmagalur), A Narayanaswamy (Chitradurga), Bhagwanth Khuba (Bidar) and Rajeev Chandrashekhar (Rajya Sabha) are all first-timers in the Union council of ministers, and their entry into the government coincided with the exit of fellow Kannadiga D V Sadananda Gowda as chemicals and fertilisers minister.

This has set off speculation that Chief Minister B S Yediyurappa, who has been facing internal dissensions, has finalised his terms of exit as part of which his nominees have been accommodated in Modi's ministry. Strengthening this view is the inclusion of Karandlaje, considered close to the chief minister.

However, Muzaffar Assadi, a political scientist from Karnataka, tells Syed Firdaus Ashraf/Rediff.com, "Those who have been appointed (ministers) are not politically powerful or a force to reckon with in politics."

How do you see the appointment of the new ministers from Karnataka?

The first question is, are these new ministers politically strong? For me, they are not a powerful category except Shobha Karandlaje for her dashing nature.

Other ministers appointed from Karnataka are not well-known political leaders or strong political voices -- unlike Bangalore South parliamentarian Tejasvi Surya, or Pratap Simha, Mysuru's member of Parliament. They were better candidates.

Probably, one reason for these appointments could be their caste, like replacing Sadananda Gowda with Shobha Karandlaje who are both from the Vokkaliga caste. They also come from the same locality in the coastal belt of Karnataka where the BJP has a stronghold.

Can you throw more light on this caste factor?

The BJP always had a caste coalition in Karnataka. Earlier they were a party of Lingayat and Brahmin castes in Karnataka. They were called as LiBrah. They then constructed a social coalition and expanded their base. Now they are trying to retain that base.

In the last general elections, they could attract some Dalits from Karnataka to their party and are now trying to retain them.

Now take the example of (Bidar MP Bhagwant) Khuba who has been appointed a minister. He is a Maratha and not a powerful man. Now the BJP wants their vote bloc. However, I don't know whether the BJP will be able to retain these vote bases because the people whom they are appointing as ministers are not aggressive to justify their ideological position.

Ananth Kumar Hegde, another rabble-rouser and aggressive in ideological positions, too was not appointed.

Do you feel placing Shobha Karandlaje in Delhi is a sign of B S Yediyurappa's impending exit as part of a compromise formula, and Sadananda Gowda's exit from the central government is a sign he could be the next chief minister of Karnataka?

Gowda is a respected Vokkaliga, but not from the heartland (area of Vokkaligas). The heartland area is Mandya, Hassan, Kanakpura and other areas. Gowda comes from Bangalore and incidentally, he hails from Puttur, the same place where Shobha Karandjale comes from.

Sadananda Gowda is considered to be a soft Vokkaliga face. He is a very sober face of Vokkaligas and not the mainstream of the Vokkaliga community.

So you don't feel there is danger to Yediyurappa?

Yediyurappa's place is in danger from day one. Other organisations are entering and deciding his politics. The RSS (Rashtriya Swayamsevak Sangh) has entered and tried to bring him to his knees. He is not agreeing with them.

That is the reason there is uneasy relations between Yediyurappa and the Sangh Parivar, with B L Santosh (the RSS pracharak deputed to the BJP as general secretary (organisation)).

The other issue is the involvement of his son (B Y Vijayendra) who now people say is acting like a proxy chief minister.

There is no other face for the BJP in Karnataka other than Yediyurappa. He represents the Lingayat face and is backed by the matadipathis (high priests) of Lingayats.

In this context, destabilising the Yediyurappa government is not a cakewalk. A large number of MLAs still back Yediyurappa. If he is destabilised, then the BJP will have problems in Karnataka.

But doesn't Shobha Karandjale coming to Delhi mean an end to Yediyurappa's tenure as CM?

If that was the case, they would have given Yediyurappa's son B Y Raghavendra a minister's post. He is a member of Parliament from Shimoga.

Shobha was close to Yediyurappa at one time.

The moment you remove Yediyurappa, who is capable enough to replace him? No one.

What is the position of the BJP in Karnataka now?

It is sliding in Karnataka. Anti-incumbency is slowly growing. They did not get a popular mandate in the assembly elections. They formed the government through proxy.

I call the Karnataka BJP government as a half-Congress government. Pragmatic politicians defected to be in power. They do not have any vision or ideology.

The BJP's popularity is coming down, especially after the misgovernance of Covid. Add to that the problem of petrol price rise and inflation.

One has to remember that the vote bank of BJP in Karnataka is not a hardcore Hindutva vote bank. The BJP came to power in reaction to the Congress's politics and coalition politics.

Do you feel there is no correlation between the appointment of ministers from Karnataka and Yediyurappa's future?

Those who have been appointed are not politically powerful or a force to reckon with in politics. In fact, if you see these 43 ministers, there is no face that is powerful.

Except one or two like Kiren Rijiju or Narayan Rane, who is a former chief minister of Maharashtra, or Meenakshi Lekhi to some extent. Jyotiraditya Scindia is there but he is not from the BJP.

Faces like Sushma Swaraj and Arun Jaitley are missing from Modi's Cabinet. We need those kind of faces in the Cabinet. 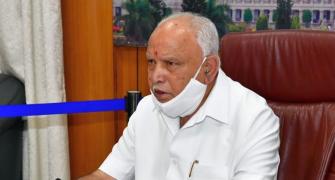 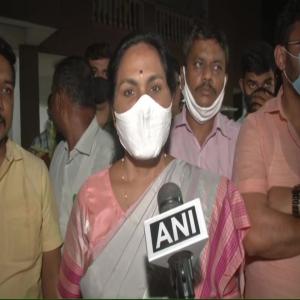 With 4 new ministers, K'taka has 6 in Union council