A woman sat on a solitary protest near the Parliament on Saturday morning in the wake of the gang rape and murder of a 27-year-old veterinarian on the outskirts of Hyderabad, and alleged that she was harassed and beaten up by police personnel following which the Delhi Commission for Women issued notice to Delhi Police. 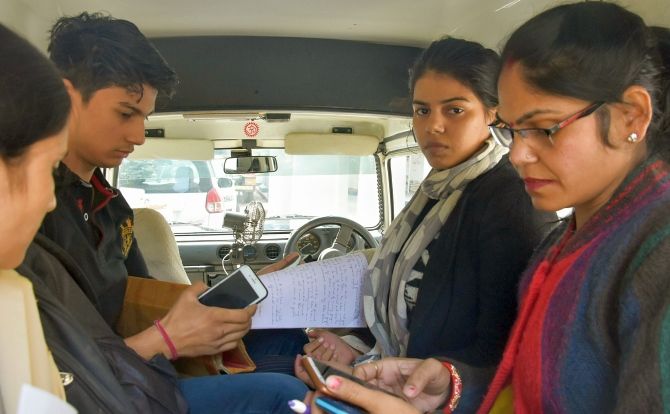 IMAGE: A woman in police detention along with her brother after she reportedly staged a protest over the gang rape and murder of woman veterinarian in Hyderabad, in New Delhi. Photograph: PTI Photo

Holding a placard with the slogan 'why I can't feel safe in my own Bharat', Anu Dubey, in her mid-20s, sat on the pavement near gate number 2-3 of the Parliament House complex to protest crime against women in the country, police said.

She alleged "gross misbehavior, harassment and violence" by Delhi Police personnel from the Parliament Street police station who forcefully removed her from the site and detained her.

Though the Delhi Police denied the allegations of brutality, the DCW issued notice to the Deputy Commissioner of Police, New Delhi district, seeking action against the erring police officials.

According to the police, some of its personnel asked the woman to go to Jantar Mantar to continue her protest, but when she refused they took her to the Parliament Street police station in a police vehicle, a senior officer said.

At that time the woman was sobbing, he said, adding that after some officers heard her grievances she was released from the police station.

Dubey, however, has alleged that Head Constables Kuldip and Manju and one more officer misbehaved with her, hit her and threatened her.

At the police station, she was allegedly thrown on a bed where three women police officers sat over her and beat her. She also had scratch marks on her body and blood was also coming out from her wounds, DCW said in the notice.

Dubey has submitted a complaint in this regard to the Parliament Street police station.

Swati Maliwal, the chairperson of DCW, has demanded that an FIR should be filed against those responsible for the misbehaviour.

"Troubled by the traumatic rape incident in Hyderabad, when a student wanted to raise her voice, she was detained and beaten up by the Delhi Police. I met the girl at the police station, she is scared. Will this be the fate of those who raise their voices?" Maliwal tweeted.

The DCW has sought reasons for removing the woman from the site, even though she was alone and sitting quietly and details of officials responsible for misbehaving with her. Along with a detailed action taken report in the matter and the action taken against police personnel, it has sought all details by December 4.

Dubey's protest came two days after the charred body of a 27-year-old veterinary doctor was found on the outskirts of Hyderabad which sparked national outrage. She was raped and killed allegedly by four men who had earlier deflated the tyres of her two-wheeler.