Rashtriya Janata Dal leader Tejashwi Yadav released his party manifesto for the Bihar elections 2020, in Patna on Saturday and said that he will make efforts to create a new Bihar by bringing in overall development. "Our party's resolution is to bring overall development to the state and create a new stunning Bihar," he said.

"This is not a manifesto, it is our pledge to bring a change which is set to become true. Every sector has been taken into consideration while preparing this manifesto so that we can make Bihar a happy, better and prosperous state," Tejashwi Yadav said while releasing vision document.

"We have talked about issues like employment, woman empowerment, agro-industry, education, smart village, Panchayati Raj institute, poverty, community development, healthcare services. In this, Lalu Prasad ji and Rabri Devi ji's message has also been given to the people of Bihar," he added.

The RJD leader continued saying, there is a difference between employment and job.

"A ragpicker is also employed but here we are talking about 10 lakh government jobs and it is set to become true during the first cabinet meeting itself. 4.5 lakh jobs are vacant in the healthcare services sector, the education department, etc. The post of seven per cent junior engineers are lying vacant," he added.

"If we had to make fake promises like the Bharatiya Janata Party and double-engine government, we would have promised to give 50 lakh or one crore jobs,' he added.

"BJP will tell who is their CM face? Nitish Kumar? Nitish Kumar stood his hands-on providing 10 lakh jobs. So from where will BJP give the jobs? Nitish Kumar is leading, then who are they fooling around?

Earlier, the Mahagathbandhan alliance in Bihar -- the Rashtriya Janata Dal, Congress and Left parties released its poll manifesto for the assembly election and promised 10 lakh jobs in the first cabinet meeting if elected to power.

In the 20 point manifesto of the Congress, free education for girls up to masters degree, scooty for girl students scoring 90 per cent marks in class 12. The party has also tried to play a regional card by promising the Maithili language to be included in the compulsory subject school syllabus.

Importantly, Mazdoor Information Center in all states' capital has also been promised to allure migrant labourers, who had been a major sufferer during the lockdown.

Congress, CPI, CPM are part of the grand alliance under the leadership of the RJD.

Bihar with 243 assembly seats will go to polls in three phases: October 28, November 3 and November 7. The results will be declared on November 10. 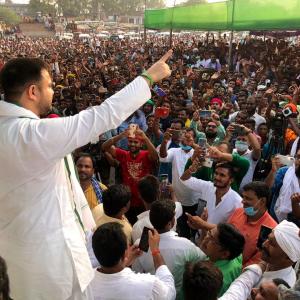 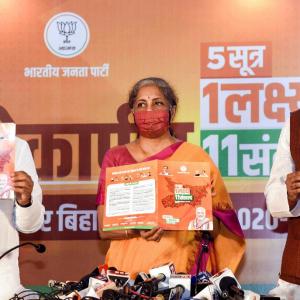