With bagful of admiration for Modi, John Kerry to arrive in India today 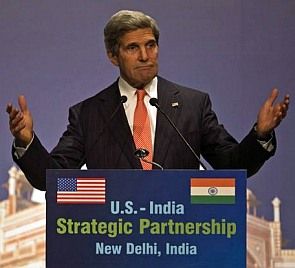 Seeking to seize "transformative moment" in ties with India, US Secretary of State John Kerry will arrive in New Delhi on Wednesday for talks on key issues with the new Indian leadership.

Kerry's visit two months ahead of Prime Minister Narendra Modi's trip to Washington in September end is aimed at instilling some vigour into the bilateral ties, which appeared to have lost momentum in the final years of UPA regime.

During his three-day visit, Kerry will co-chair the fifth India-US Strategic Dialogue on July 31 along with his Indian counterpart Sushma Swaraj on crucial issues of Strategic Cooperation; Energy and Climate Change, Education and Development; Economy, Trade and Agriculture; Science and Technology, Health and Innovation.

Ahead of his visit, Kerry in Washington said "this is a potentially transformative moment in our partnership with India, and we're determined to deliver on the strategic and historic opportunities that we can create together" and added that "The US and India can and should be indispensable partners for the 21st century."

He will call on Modi, who has been invited by American President Barack Obama for a meeting in Washington in September.

India-US ties hit a low at the end of last year after senior Indian diplomat Devyani Khobragade was arrested in New York, strip-searched and charged with visa fraud for allegedly underpaying her babysitter.

Kerry is also expected to visit Bengaluru and will also be joined by the Secretary of Commerce, Penny Pritzker, who will be visiting Mumbai prior to participating in the Strategic Dialogue.

On the eve of his visit, Kerry also backed Prime Minister Narendra Modi's poll slogan of "Sabka Saath, Sabka Vikas" calling it "a great vision", and a "vision that we want to support".

"We believe it's a great vision, and our private sector is eager to be a catalyst in India's economic revitalisation," Kerry said in a major foreign policy speech on India at an event held by the Centre for American Progress, a top US think tank.

He said now is the time to renew that dialogue with a new government, with a new set of opportunities, new possibilities.

"This is a potentially transformative moment in our partnership with India, and we're determined to deliver on the strategic and historic opportunities that we can create together," Kerry said ahead of his visit to New Delhi to co-chair the fifth India-US Strategic Dialogue with his Indian counterpart Sushma Swaraj on July 31.

"President Barack Obama is absolutely right to call this a defining partnership for the 21st century. India's new government has won an historic mandate to deliver change and reform," he said.

"And together, we have a singular opportunity to help India to be able to meet that challenge -- to boost two-way trade, to drive South Asia's connectivity, to develop cleaner energy, to deepen our security partnership in the Asia Pacific and beyond.

"The US and India can and should be indispensable partners for the 21st century, and that is, I assure you, the way we approach the Modi government and the way we view this particular time," he said.

"This is the moment to transform our strategic relationship into a historic partnership. This can be a moment where our destinies converge. US and India can create a more prosperous future for the world," he said.