8 of the 13 resignations not in order, says Karnataka Speaker 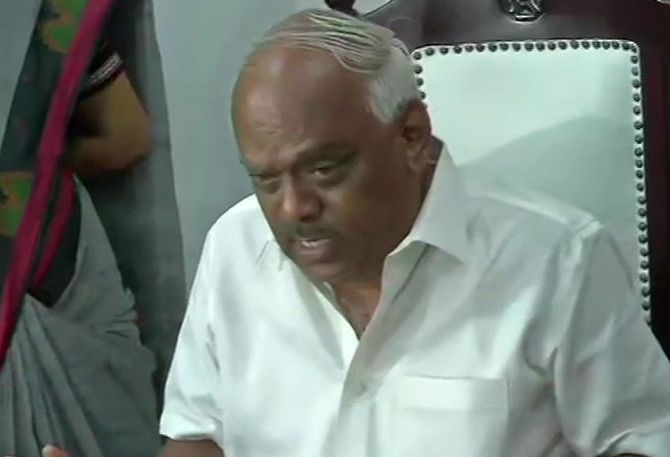 Every step he takes will become history and he cannot afford to make any mistakes, Karnataka Assembly Speaker K R Ramesh Kumar, who holds the key to the future of the Congress-Janata Dal (Secular) coalition government, said on Tuesday.

All eyes are now on Kumar who has to take a call on the resignations tendered by 13 MLAs of the Congress and the JD-S from the assembly.

He said eight of the resignations were not in order and five have been called for discussions.

Talking to reporters, he said he has given the five MLAs, whose resignations are in order, two days time to present themselves before him.

He said none of the 13 MLAs had met him to give their resignations.

The Speaker also said he has received a petition from Congress Legislature Party leader Siddaramiah seekig disqualification of the dissident MLAs.

Kumar also questioned the communication from Governor Vajubhai Vala asking him to accept the resignations of the MLAs and the ministers who have quit the government.

"I have written to Governor Vajubhai Vala that none of the rebel MLAs have met me. Governor has assured me that he will uphold the constitution," Kumar said.He said that out of 13 resignations put forth by the lawmakers, eight were not according to the law."I have given them time to present themselves before me," Kumar said, adding, "There is one petition on the disqualification of four MLAs pending in my office, I will act on it."

The Speaker said that the Governor wrote back to him, claiming that Independent lawmaker H Nagesh has resigned.

"There is nothing I can do about the ministers. I do not know why the Governor wrote to me. It is left to the Independent MLAs to decide who they will back on the floor of the house," Kumar said.

Kumar said that the Congress told him that R Shankar has merged with their party.

"If it was done as per the rules, there is no issue. There is no need for investigation. I have all the documents. I will give it to you," the Speaker added.

The MLAs -- along with two independent MLAs -- are said to be camping somewhere in Maharashtra and have most likely switched their loyalty to the Bharatiya Janata Party.

Ahead of the assembly session from July 12, the speaker's decision on the resignation letters holds great value as it will decide the future of the shaky coalition government led by H D Kumaraswamy.

If the resignations of the 13 MLAs are accepted, the coalition's tally will be reduced to 103. The speaker also has a vote.

Asserting that he will go through the rule book, the speaker said he will consult seniors about the developments, whether the resignations can be accepted or was a different course of action needed.

"I have to make a conscious decision. Every step I take will become history, so I can't be committing a mistake. Future generations should not look at me like an accused," Kumar added.

Questioned on whether the Congress legal cell had written to him that the resignations should not be accepted, Kumar said he has not seen the letter yet.

"I left office on Saturday. I came only today. Whichever cell has written, I have to go through it now," he told journalists at the Vidhana Soudha.

"Whether I will decide it today or in the next two hours, doing it two years later These are all irrelevant questions to me. I have to respond to the sentiments of the people."

Kumar added that he must understand the helplessness of the people of the state, the feeling of general public, look at the provisions of constitution, the rule book and the spirit and interpretation of the law.

"Then I must act as a man with clear conscience and I am going to do that."

The speaker said he held an office which was responsible and important.

"I come from a very ordinary background but I am occupying a very important place. I cannot be doing injustice. I cannot bring dishonour and disgrace to the office I hold," Kumar said.

As questions mount on the future of the government in Karnataka, the BJP said there was every likelihood of the process of accepting the resignation being delayed through some ulterior ways.

Shiggaon BJP MLA Basavaraj Bommai said there was scarcely any scope of not accepting the resignations of the MLAs.

"When the MLAs have resigned, how can you disqualify them? Hence, there is no question of rejecting the resignation letter. The copy of the letter submitted to the governor is in accordance with the Constitution. It is only a futile attempt of Congress and JD(S) to bypass the constitution to stay in power," Bommai told reporters.

The BJP MLA, however, expressed his faith in the speaker and said that he would take a decision in accordance with law.

The 13 dissident MLAs--10 of the Congress and 3 of the JD(S)-- submitted their resignations to the speaker's office on Saturday.