Will Uttar Pradesh Chief Minister Akhilesh Yadav be allowed to take action against two of his ministers whose utterances have put the Samajwadi Party government to utter embarrassment?

That is a million dollar question being hotly debated in political and bureaucratic circles across the state, where a couple of ministers have been found to be affected by the ‘foot-in-mouth’ syndrome.

While Akhilesh Yadav was already on his way to United States where he is scheduled to address scholars and students at the HarvardBusinessSchool on the Kumbh Mela success story, sources close to him claimed that he had taken serious note of the ministers’ loud and irresponsible statements, when he was informed about it shortly before his departure.

“I can assure you that he will initiate action against both the ministers whose utterances had doubtlessly caused much embarrassment to the chief minister and the ruling party”, confessed a senior Samajwadi Party functionary.

Asked if his peers would allow Akhilesh to axe the ministers, he said, “I do no think anybody will have any ground to defend these two ministers. After all SP president Mulayam Singh Yadav had been critical of his son only because he had been somewhat soft; so how can anybody object if Akhilesh seeks the scalp of these ministers?”

Speaking at a public function, Textile Minister Shiv Kumar Beria went to the extent of declaring, “No cop can do anything without taking instructions from me. He cannot even dare to sit until I order him to sit. After all I am a minister in the government; I am not in the opposition. How can he dare to defy me or not to listen to me? I’ll make sure that if a policeman defies my orders, he would not be allowed to continue in that position even for a minute. I would see to it that he is given marching orders within 24 hours”.

Yet another minister Ram Murti Verma on Tuesday went about proclaiming, “Crime is a routine thing in UP and will continue to take place; nothing can ever bring crime to an end in this state.”

But evidently, they were not the only members of Akhilesh’s council of ministers to be indulging in such loud talk. A couple of other ministers too have been doing such acts at the cost of undermining the reputation of the 13-month old Samajwadi Party government.

Not very long ago another minister Durga Prasad Yadav, while commenting on the poor law and order situation in the state, had said, “Even God cannot reduce crime in Uttar Pradesh.”

Then there was Akhilesh’s all-powerful cabinet colleague Azam Khan, who went to the extent of declaring publicly, “I would not mind leading people to pull down the Taj Mahal, because I firmly believe that it was an extravagant misuse of public money by a ruler, who had no business to do that to display his love for his wife.”

Azam Khan gave sleepless nights to actress Jaya Prada by using the most derogatory invectives during the last Lok Sabha election campaign in Rampur from where she eventually got re-elected. He also took on Jama Masjid Imam Maulana Ahmed Bukhari whenever the latter tried to throw his weight over Mulayam Singh Yadav.

Earlier, while travelling on a train from Lucknow to Rampur, he made the Travelling Ticket Examiner to hold his ears and do sit-ups because of untidy linen provided to him in the coach.

When a move was initiated to make him the assembly speaker, Azam told a TV channel, “I don’t mind becoming speaker but the only trouble is that if any member will fling paper balls at me, I will retaliate by throwing the paper weight.”

Far from initiating any action against him, a helpless Akhilesh laughed it off.

Akhilesh’s complacence remained quite noticeable all along his first year in office. But what became the turning point was the sacking of Raghuraj Pratap Singh ‘Raja Bhaiya’ from the council of ministers after much heat and dust was raised over his alleged involvement in the killing of a deputy superintendent of police in his constituency.

What followed was the dropping of Raja Bhaiya’s protégé Raja Ram Pandey from the cabinet after the latter sought to literally denigrate womanhood. Asked to comment on the poor state of roads in his constituency, Pandey told a press conference, “Just wait for sometime, I will make your roads as smooth as the cheeks of Hema Malini and Madhuri Dixit.”

Pandey was so casual in making such an utterance simply because he had got away with a more outrageous comment -- and that too about two women district magistrates of Pratapgarh, his home district.

“Pichli baar jab main is zile ka prabhari mantri tha, tab bhi yahan ki DM ek mahila thee, aur yeh mera saubhagya hai ki is baar bhi yahan ki DM ek mahila hain (last time when I became minister-in-charge of this district, there was a woman DM here; and it is my fortune that this time again the DM happens to be a woman),” Pandey told a gathering, while giving away cheques of the unemployment dole, announced by chief minister Akhilesh Yadav.

While his remark sent the crowd (mostly his party workers) into splits of crude laughter, he went on to add, “Pichli baar yahan ki DM Kamini Chauhan Ratan thi, jo ki bahut sundar mahila thi; main sochta tha ki unse sundar mahila ho hi nahi sakti. Lekin is baar jab main phir se is zile ka prabhari mantri bana hoon, to DM K Dhamlakshmi unse bhi adhik sundar hain ….bahut hi sundar vaani hai unki aur karyakushalta bhi adhik hai (last time the DM here was Kamini Chauhan Ratan, who was such a pretty woman that I could not imagine there could be a more beautiful woman; but now when I have become in-charge of this district once again, the DM is K Dhanalakshmi who is even prettier. She also has a very sweet voice and is also very competent in her work)”.

As if that was not enough, the minister went further, “inki kad-kathi bhi bahut achi hai (her height and figure is also very good)”.

Sure enough, if the chief minister had ordered action against him at that point of time, probably he would have saved himself of the embarrassment now. But the chief minister claimed, “The minister was reprimanded for his utterances then too, but the way he went about making objectionable remarks against both Hema Malini and Madhuri Dixit now shows he is incorrigible; action, therefore, became inevitable .” 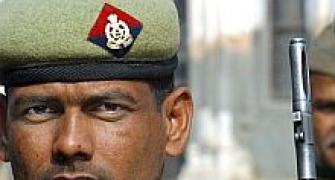 Dabangg UP ministers shoot off their mouth 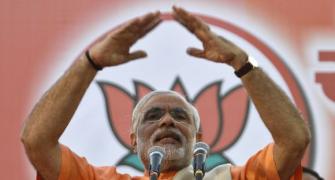 'Modi may help BJP win, but he is bad for the party'
UP police extortion bid adds to Akhilesh's embarrassment 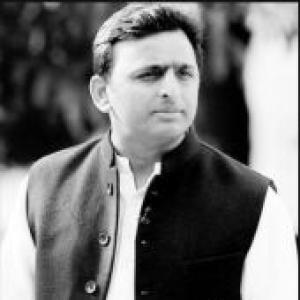 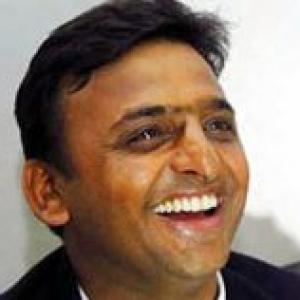 Akhilesh off to Harvard to narrate Kumbh success story