Why should I dislike Chidambaram?: Swamy 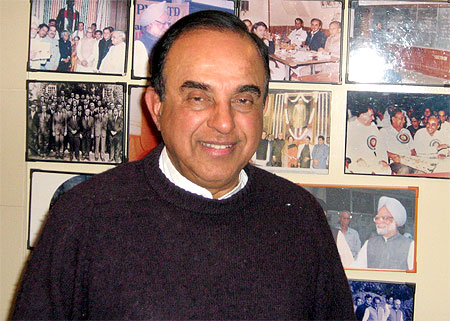 A Ganesh Nadar provokes the maverick politician to find out.

Dr Subramanian Swamy -- president of the Janata Party which once ruled the country, but hardly has a presence in any state -- is a rock star for Indians opposed to the Congress party and the Gandhi-Nehru family.

The outspoken economist-politician, who was recently removed from Harvard's roster of lecturers, spoke to Rediff.com's A Ganesh Nadar at his New Delhi home.

I want to see the country progress. I wanted India to go nuclear in the 1960s and it happened. I wanted better relations with China and that too has happened.

The only thing that I wanted and has not yet happened is a Hindu renaissance. I am working for that now.

Do you personally dislike Home Minister P Chidambaram? Why?

I do not know him personally. Why should I dislike him? You people just say anything.

When I went after (former Union telecom minister) A Raja you said I don't like Dalits.

When I went after (Dravida Munnetra Kazhagam MP and former Tamil chief minister M Karunanidhi's youngest daughter) Kanimozhi you said I don't like women and now you say I don't like Chidambaram.

He has said he was my student at Harvard. I don't recall that. I guess he must have been a poor student. If he had been a good student, I would have remembered him.

What more are you going to say to prove Mr Chidambaram's alleged link to the 2G scam?

Nothing more. I have already proved his involvement. Now all I need to do is show the documents to the departments that issued them and get them to certify that it is their document.

What do you think happened between Tamil Nadu Chief Minister J Jayalalithaa and her aide Sasikala?

I have not met Jayalalithaa after the split, so I do not know the exact details.

From what I hear, Sasikala was trying to implicate Jayalalithaa in the disproportionate assets case.

What is your stand on the Koodankulam nuclear power project?

It is a very good project. The agitation is being paid for by the Western powers that do not want to see a Russian project succeed.

For then all future projects will be given to the Russians. Their (the Russian)rates are cheaper and their technology is better.

The agitation should be crushed.

I see so many priests in the protests. What are they doing there? The Church has never said it is against nuclear energy.

What is the solution to the Mullaperiyar dam issue?

When I was elected as the MP from Madurai, the people petitioned me to raise the height of the water in the dam. I argued in the Supreme Court for eight years and got an order to raise the water level from 136 feet to 152 feet. I got that order in 2006.

The order was not implemented by the Tamil Nadu government. They sat on it and did nothing.

In that reclaimed land, many people have built luxury homes. Now if you increase the height, these homes will get flooded.

The Tamil Nadu government did not implement the Supreme Court order that I obtained. Now it cannot be implemented. The court will not accept it.

The Centre should build a new dam and make Kerala pay for it.

Why have you joined the NDA (National Democratic Alliance)?

I have not joined the NDA. We had talks, that is all.

The engagement has happened,but the marriage is yet to take place.

Anything particular happened the last time you taught at Harvard?

Nothing happened at that time. I wrote an article in the DNA newspaper that upset a few people. At that time they wanted to sack me, but Harvard said it was freedom of speech.

This year they had a meeting where a vote was taken. While the moderates did not turn up for this vote, the extremists turned up in large numbers. They won and my subjects were cancelled.

This is the first time that freedom of speech has been decided by voting.

Harvard should be ashamed of it. I am sure that at some stage they will apologise to me.

I teach there for two months in the summer for one semester.

How will Indo-China relationships go in the next decade?

We should be friends with China and quit crying that they are building a road near the border, or talk about the pearl necklace that it is building to encircle us.

We should just do the same. The Malacca Straits is very important to China. All its ships pass through it. It is very near the Andaman Islands.

We should sign a treaty with Indonesia. They too don't like the Chinese and then control the Malacca Straits.

If China acts aggressive anywhere we should close down the Malacca Straits. We should also have defence pacts with Vietnam, who are ready for it.

We should build up our defences against China. There should not be any repeat of 1962. At the same time our foreign policy should be friendly towards China.

What about Indo-US relations with regard to China and Pakistan?

The US is a country that believes that every favour should be returned. We should have sent our troops to Iraq but (then prime minister Atal Bihari) Vajpayee did not.

We do not support the US in many international disputes, which is wrong.

We think the US should side with us on merit. That will never happen.

Merit has no place in international relationships. We have to give them something for something they give us.

If we don't do that, then we will join Japan and Australia and we will be treated like concubines.

Do you want to be in a harem?

We should not interfere if there are tensions between the US and China. That is their problem and they will deal with it.

Where would you place India in the comity of nations with regard to our aspirations to be in the Security Council?

We will never be in the Security Council.

In the comity of nations we stand nowhere.

There are rumours that Brahmin IAS officers give you all the dirt against ministers.

Even the Scheduled Castes among the IAS cadre give me information. I studied in the elite schools of Delhi and then at Hindu College. My classmates are in high positions in the civil services.

My father was a secretary in the government. My father-in-law was in the ICS. I have contacts and a great network and that is how I get my information.

Normal politicians promote their friends and hide their enemies. I do the opposite. I make my enemies public and keep my friends a secret.

Jayalalithaa has not done anything since she won the assembly election. All she does is arrest DMK cadres.

She was in the grip of Sasikala and her ilk who were transferring officers and making deals. Now that they have gone, Jayalalithaa can concentrate on good governance.

It is true that so far she has done nothing.

Tell me about the Emergency.

During the Emergency, the RSS (Rashtriya Swayamsevak Sangh) told me that I should go out and tell the world what atrocities are happening here. So I went to the US and Europe and told them what Indira Gandhi was doing here.

I destroyed her credibility there.

I was a Rajya Sabha MP at that time. I knew that if I remained absent for six months they could use that to disqualify me. So I came back and attended Parliament.

I walked out and drove away in my car. I was wearing a kurta pajama. I changed that to normal clothes with a half sleeve shirt and a kara like a Punjabi lad.

I went to the station and took a train to Nagpur. There I took another train to Bombay. From there the RSS drove me to Nepal in a car. The King of Nepal was my student. He flew me to Thailand in his plane. That is the way I escaped.