Sheela Bhatt blames the Delhi gang-rape and its aftermath on the city's dreadful transport mafia, the offspring of the nexus between politicians, crooked bureaucrats and shady operators. 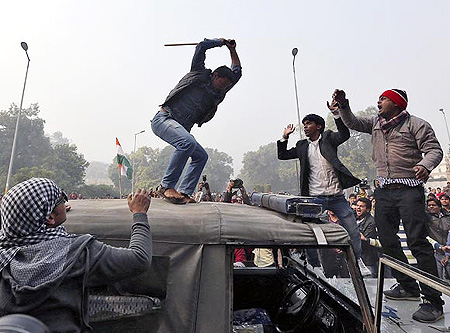 Since December 17, Delhi Chief Minister Sheila Dikshit has been calling Union Home Minister Sushilkumar Shinde, Home Secretary R K Singh, legal experts, women's rights experts and, of course, Delhi's Police Commissioner Neeraj Kumar to suggest that she should not be blamed for the horrific gang-rape of an aspiring physiotherapist on a Delhi bus.

Her contention is that 'Since the police commissioner of New Delhi reports to the Union home ministry, the fallout of the horrific rape case should be solely on the Delhi police.'

Dikshit is stating a half-truth. She and her son, East Delhi MP Sandeep Dikshit, have demanded Neeraj Kumar's resignation. This is political pretense of the highest order.

If one goes into the details of this particular case and not into the larger issues of how Indian society deals with women, then it is clear that the girl's plight is largely due to the fact that there exists a dreadful New Delhi transport mafia.

By taking the killer BlueLine buses off the city's roads -- this, only after huge public protests and after a judicial rap -- the Delhi government did try to somewhat control the mess on the roads, but things were done imperfectly and half-heartedly because of pressure from a corrupt system.

There is an enormous amount of black money in the 'auto-mafia' and 'transport mafia'. There is a sensational lack of governance here. All kinds of anti-social elements are allowed to invest in autorickshaws to earn quick and easy money, to exploit poor drivers and passengers in New Delhi.

Almost 90 percent of auto ownership in New Delhi is benami, says Nyaybhoomi, an NGO that is trying to protect the rights of around 100,000 drivers who are exploited by owners of these autorickshaws.

Nyaybhoomi alleges that 'The auto-finance-mafia has adversely affected the livelihood of approximately one lakh (100,000) auto drivers and cause suffering to millions of passengers. The vehicle, which officially costs Rs 1.3 lakh (130,000) now commands a market price of Rs 6 lakh (600,000) due to the tactics adopted by the auto-finance-mafia.' Read the report here.

The scene is worse in the case of buses, which are not only in the hands of dubious individuals who are difficult to nab, but also enjoy protection from the police and politicians in New Delhi.

All of us who live in New Delhi suffer day in and day out because it is the most unfriendly Indian city to commute for ordinary men and women.

It is so, because despite being in power for three terms, Sheela Dikshit has not clamped down on the owners of autos and private buses. She has singularly failed to make the ownerships of buses and autos transparent. She has failed to bring the system under the purview of the law.

Ram Singh, one of the alleged rapists and the bus driver in the horrific December 16 gang-rape case, was arrested without much delay because the police know well who plies which bus at what time and where. It is a well-oiled nexus at work.

Three-wheelers, either without meters or rigged ones, burn a hole in the pockets of middle-class commuters. The army of private buses that ply the nooks and corners of the national capital are made unsafe due to the connivance of politicians, police and bureaucrats in the transport department.

The Delhi rape victim's plight must be blamed on the nexus that exists around the transport department in New Delhi. How did the bus operator allow Ram Singh, one of the alleged rapists, to drive the bus in spite of Singh having flouted the law in the past?

Why did the police not have a set system to check the licences of drivers who pick up passengers from public areas?

The Delhi government just cannot escape its responsibility. Delhi's Lieutenant Governor Tejinder Khanna, who was holidaying in America, returned only after the students' protests grounded the government. Had he any shame, Khanna should have resigned at the airport before stepping into New Delhi.

Dikshit's shameless government will find many excuses to pass the buck, but the fact that Khanna and she are not on good terms cripples the Delhi administration.

The chief minister cannot cry foul over not having control over certain administrative matters because her Congress party has been in power at the Centre for the last eight years. Dikshit and Congress President Sonia Gandhi, incidentally, have a blow hot, blow cold relationship.

Dikshit's coterie -- that consists of her sister Rama, her son Sandeep and some bureaucrats -- are resented by many in her party. As a result, things move in New Delhi only where mega projects with mega bucks are involved. Or else, Dikshit's hold on New Delhi is slipping.

There are enough grounds for Delhi Police Commissioner Neeraj Kumar to resign with immediate effect. Last week, he declared, rather insensitively, that, 'Women should not go out late at night.'

Because, says the man in charge of Delhi's law and order machinery, women are 'vulnerable.' That, reveals the police commissioner of India's national capital, is the advice he gives his daughters.

When asked if he would give the same advice to his son, Kumar said since he does not have a son, he did not want to give a dishonest answer.

At his press conferences, Kumar kept repeating that he does not want to give 'politically incorrect' answers about the high rate of rape in India and issues related to rape.

But at one meeting with Dikshit present, Kumar finally revealed his 'politically incorrect' answer. The police commissioner reportedly declared that '94 percent of rapes in India take place within the family fold.' Meaning, the police cannot be present everywhere. Some enlightened activists present at that meeting argued that Kumar's figure is not authentic.

Clearly, Neeraj Kumar is unfit to be police commissioner if he wants 'vulnerable women' in the 21st century to stay home because he cannot have a policing machinery in place to protect them.

Kumar tried hard to become director of the Central Bureau of Investigation. The police commissioner who revealed a ruthless bent of mind by stating at a nationally televised press conference that 'I don't want to be politically incorrect' must not be shown any mercy.

But the bigger problem lies in Sonia Gandhi's selection of a politically correct and compliant 'Dalit Congressman' as home minister.

Sushilkumar Shinde had no qualification to be appointed India's home minister after failing miserably as power minister. Still, he was made Union home minister. He has no clue about what his job means.

In an interview to CNN-IBN's Rajdeep Sardesai, while revealing his reasons for not meeting the protestors at India Gate, Shinde said, 'It's very easy to ask the home minister to go to India Gate and talk. Tomorrow, if any other party demonstrates, should the home minister go there? Tomorrow, the BJP will demonstrate, tomorrow the Maoists will come here to demonstrate with weapons.'

Which world does Shinde live in?

Sonia Gandhi should educate her preferred choice as home minister that the India of 2013 will not tolerate his feudal views.

Image: A demonstrator breaks the windshield of a police vehicle in the India Gate area. Photograph: Ahmad Masood/Reuters 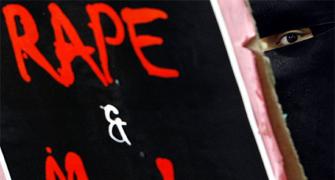 'A woman is kidnapped, raped every 40 minutes in Delhi'
Delhi gang-rape: Teargas, water cannons rain on protesters
'Even if law changes, Delhi rapists CAN'T be hanged' 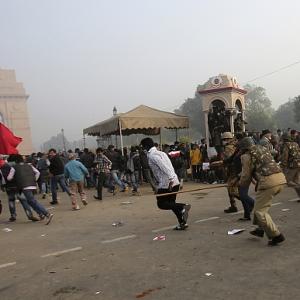