IMAGE: Minister of External Affairs S Jaishankar speaks to the media after the 2019 US-India 2+2 Ministerial Dialogue at the State Department in Washington, DC on Thursday. Photograph: Joshua Roberts/Reuters

Addressing a group of Indian reporters here on Thursday as he concluded his trip to Washington DC, which was primarily to attend the India-US 2+2 dialogue, Jaishankar said the resolution introduced this month in the House of Representatives was not a fair characterisation of the situation in Jammu and Kashmir.

"I am aware of that (Congressional) resolution. I don't think it's a fair understanding of the situation in Jammu and Kashmir, or a fair characterisation of what the government of India is doing. And I have no interest in meeting (Jayapal)," he said in response to a question.

India has defended the restrictions in Kashmir on the grounds that they were imposed to prevent Pakistan from creating more mischief through proxies and terrorists following the abrogation of Article 370 which ended the special status of Jammu and Kashmir.

Do you treat the resolution currently in the (House Foreign Affairs) committee seriously: the resolution that criticises the situation in India? the minister was asked.

"I have an interest in meeting people who are objective and open to discussion but not the people who already made up their minds," Jaishankar said in response.

Earlier, The Washington Post reported that Jaishankar 'abruptly cancelled a meeting with senior members of Congress this week after US lawmakers refused demands to exclude' Jayapal from the meeting.

"This only furthers the idea that the Indian government isn't willing to listen to any dissent at all. The seriousness of this moment should've been a reason for a conversation, not dictating who's in the meeting, which seems very petty," Jayapal was quoted as saying by the leading American daily.

Jayapal said she had planned to advance her resolution on Kashmir this week but was urged to wait until after meeting with Jaishankar. Now she plans to renew her push for the resolution in January, the report said.

"My constituents care about the human rights situation, thousands of people detained without charges, and a communication crackdown that makes daily life more difficult," she was quoted as saying in the report.

However, Congressional sources familiar with the deliberations said that the meeting was cancelled as House Foreign Affairs Committee kept on changing the ground rules of the meeting and kept on adding new members to the list.

A day before the meeting they added Jayapal and several other lawmakers who were known India-bashers and sponsors of the Congressional resolutions on Kashmir.

The Indian Embassy did not respond to questions. However, earlier in the day, Jaishankar had explained, in response to a different question, his reasons for not meeting lawmakers who are not objective and are biased.

Responding to a question, Jaishankar said that the Indian government had no problem with the Democrats and it has a very strong relationship with them.

"No, I don't think so. Honestly, I don't think so. My own sense is that support for the relationship is extremely strong in a very, very wide cross section members of Congress and political leaders outside the Congress," he said.

"So, I wouldn't take a few voices and necessarily reach a sweeping conclusion, which your question seems to suggest," the minister said when asked if India has a problem with the Democrats.

"I'm not personalising this. I don't want to get into names. All I'm saying is we have always operated in this country because we are always engaged with everybody (who) was reasonable and open minded," Jaishankar said.

In addition to his 2+2 ministerial, bilateral and those at the White House meetings, Jaishankar also met leadership of the Senate Foreign Relations Affairs Committee including its Chairman Senator James E Risch and Ranking Member Senator Bob Menendez.

On the eve of the ministerial, he also met some of the key members of the House Foreign Affairs Committee including Congressmen Ami Bera and Brad Sherman from the Democratic party and Ted Yoho and Francis Rooney from the Republican Party.

The second 2+2 ministerial dialogue was hosted by Secretary of State Pompeo and Secretary of Defense Esper for their Indian counterparts Jaishankar and Minister of Defense Rajnath Singh.

Jayapal, the Chennai-born first-ever Indian-American women elected to the House of Representatives, ignored the voices of the diaspora from across the country as she went ahead with her pre-announced plans to introduce the resolution on Kashmir in the House early this month.

The pending resolution, introduced after several weeks of efforts by the 54-year-old Jayapal, urges India to lift as swiftly as possible all restrictions on communications in Jammu and Kashmir which were imposed following the abrogation of Article 370 on August 5.

It also urges to preserve religious freedom for all the residents of the erstwhile state of Jammu and Kashmir.

Jaishankar said that the Trump administration has a very clear position on Pakistan and wants Islamabad to take immediate, sustained and irreversible action on reining in terror groups and to ensure that its soil is not used for terrorism.

US Secretary of State Mike Pompeo and Defense Secretary Mark Esper hosted Jaishankar and Defence Minister Rajnath Singh for the second 2+2 dialogue in Washington, DC on Wednesday. Jaishankar and Singh left the US on Thursday.

Jaishankar told a group of Indian journalists in Washington, DC on Thursday that the relationship between India and the US had expanded both in its scope and content.

He said the regional issues -- including Pakistan, Afghanistan, Iran and South East Asia -- were discussed during the talks.

"With regard to Pakistan, what we heard was very clear position from the American side which was for them to take immediate, sustained and irreversible action regarding the fact that territory under their control is being used for terrorism," he said.

The US has supported several Indian initiatives including Coalition for Disaster Resilient Infrastructure and Indo-Pacific Oceans Initiative.

The natural focus for the discussions were foreign policy, defense and national security policies, he said.

In a major decision, the 2+2 ministerial decided to have Indian liaison officers with Bahrain-based US Naval Forces Central Command and possibly with the Special Operations Command, he said.

On the other hand, a US liaison officer is likely to be stationed at the Information Fusion Centre for the Indian Ocean Region (IFC-IOR), Jaishankar said.

The center has been established by India to advance cooperation on maritime security across the region.

According to the joint statement, they also discussed ways to enable closer Army-to-Army and Air Force-to-Air Force ties and to explore cooperation between Special Operations Forces, he said.

Describing the decision to hold Tiger Triumph tri-services exercise annually as a major outcome of the ministerial, he noted that it was important to do this humanitarian assistance and disaster response (HADR) exercise because one of the trends seen over the last few years is that some countries in the region do need to come forward to address that need.

India has now taken the lead to a large extent in recent past. So, working with the Americans who have a lot of experience and capabilities in the region, he added.

Signing of the Industrial Security Annex provides the framework for the exchange and protection of classified military information between the industries of the two countries. This is very important for industrial collaborations under 'Make in India', he said, noting that such an arrangement existed at the government level.

Finalisation of a Statement of Intent to co-develop several projects and also of the Standard Operating Procedure for setting forth implementation guidelines for projects under DTTI and the Industry-to-Industry Framework, were other key areas of progress in the defense sector, Jaishankar said.

The two countries agreed to explore the establishment of Maintenance Repair and Overhaul (MRO) facilities in India.

"Maintenance, repair and overhaul is an important business. It's very necessary business. There are our capabilities in India, there are our platforms, many of them of American origin, not just in India, but in the larger region. So, we need the support of American OEMs to do that," he said.

In addition to his bilateral meetings with Pompeo, Jaishankar also held a meeting with the National Security Advisor at the White House.

"One, of course was that we agreed on an internship program," he said.

Every year about 200 Indian interns would come to the US. Students at post-secondary or graduate levels will come here and essentially look at internship opportunities in different areas, he said.

The two countries also agreed to strengthen the bilateral parliamentary exchanges. US Congress, historically, has played an important factor in this relationship and so has members of parliament, he said.

"We would love to encourage more interaction between them and the parliament," Jaishankar said.

Observing that India wants to build its strength in counterterrorism jurisprudence, the External Affairs Minister said the ministerial looked at judicial cooperation between US Federal Judicial Center and the National Judicial Academy in Bhopal. 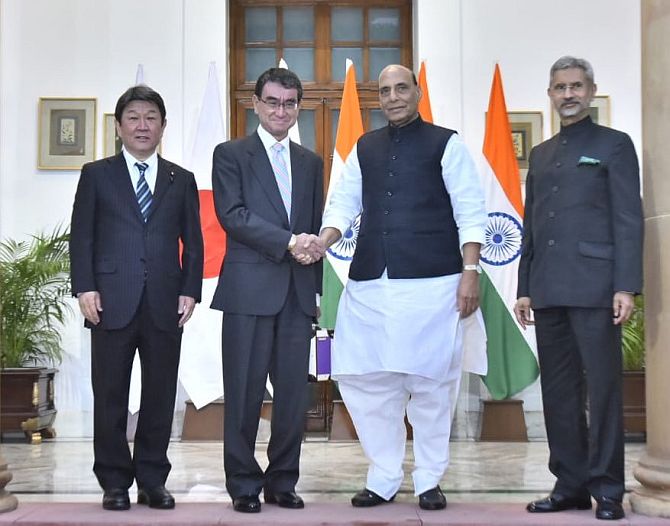