'If we cannot conclude a trade deal, both sides are likely to take trade actions that will further impair our government-to-government ties.' 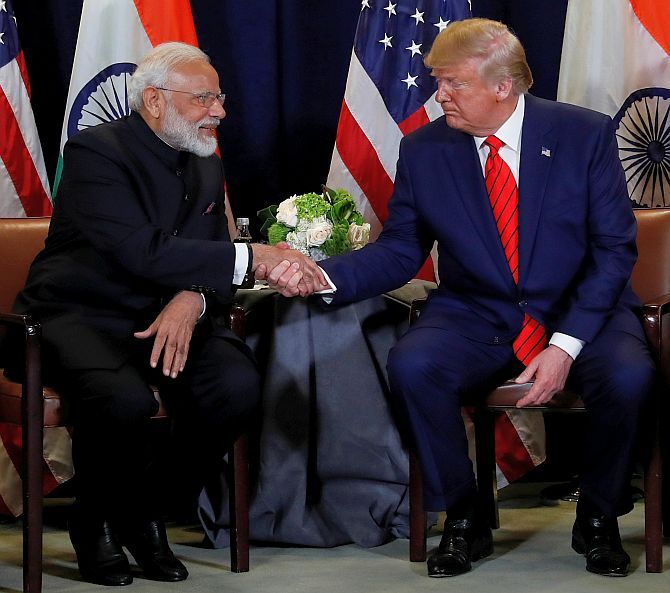 "There is a real chance our (India-US) relationship could get worse, at least in the near-term," Richard Rossow -- who holds the Wadhwani Chair in US-India Policy Studies at the Center for Strategic and International Studies, the respected Washington, DC think-tank -- tells Rediff.com's Archana Masih.

President Trump has offered to mediate on Kashmir four times after his meetings with both Prime Minister Modi and Khan. What do you see as the reason behind President Trump's insistence -- in spite of the fact that after each offer from him comes the Indian government's emphatic response that Kashmir is a bilateral matter and will not need any third country's intervention?

The president believes he has a unique ability to conclude tough agreements, and would love to apply this ability where it is most critical.

But irrespective of his abilities in this regard, Kashmir is not the right issue to take up.

Do you think President Trump aim is to gently nudge India and Pakistan to get them to start talking with each other? Do you see this even possible in the near future?

But despite solid talks between Indian and Pakistani political leaders, Pakistan's military and terror group leaders had different plans.

Talks must have the full weight of the Pakistan military to be credible unless the civilian government can truly begin to exert real control over the military.

India-US relations are multi-faceted and pertain to a wide dimension of issues. Do you think this time around there was too much focus on Kashmir and the Pakistan angle, at least in the media?

I agree that the media has focused on Kashmir of late.

But yes, the relationship between the United States is overall pretty positive and quite complex.

India is among the United States' top 10 trade partners, and a key investment destination.

Indian firms are also increasingly investing in the United States.

The US hosts a large Diaspora population that remains quite close to their homeland.

What is your assessment of the outcomes of the bilaterals between India and the US?

The bilateral relationship had some high-profile moments, notably seeing our respective leaders on stage and getting along well in Houston.

But substantively, not much came of the visit.

The most significant potential outcome would have been an agreement to peel back some of the newly-erected trade barriers.

While such a 'deal' was not consummated, talks are ongoing, so I'm hopeful.

Why do you think the two countries were unable to reach a limited trade deal in spite of the personal bonhomie between the two leaders?

These issues are difficult.

Both our nations face big trade deficits, and our leaders are working hard to protect domestic manufacturing.

We see a renewed focus on economic nationalism, and that will create real tensions -- and make trade liberalisation more difficult.

In your opinion, what are the thorny issues in achieving a trade deal and removing the irritants in the relationship?

Some issues on the American agenda, like pressing India to make patent renewals more liberal, are non-starters in Delhi.

Washington will have a difficult time taking the specific steps Delhi wants to see, like restoring the Generalised System of Preferences programme granting zero-duty access to the American market for a range of products, or waiting recent steel and aluminum tariffs.

Do you believe the India-US relationship can only get better hereon? What do you expect will happen in the short-term? In the long-term?

No, there is a real chance our relationship could get worse, at least in the near-term.

If we cannot conclude a trade deal, both sides are likely to take trade actions that will further impair our government-to-government ties.

But in the long-term, yes, our interests -- both economic and strategic -- converge around some key themes.

We are both concerned about belligerent Chinese actions as China grows in strength.

And we are two of the fastest growing large economies with great complementarities. Both President Trump and Prime Minister Modi appeared to be playing to their political constituencies in Houston. One didn't hear a blueprint for the India-US relationship in their speeches. Or are the optics of an American president appearing alongside an Indian prime minister enough to cement the cracks that have appeared in the relationship over the last year?

No, these cracks are not 'cemented' -- not by a long shot.

Getting a narrow deal resolving some areas of our trade dispute will help in the interim.

But both nations are led by economic nationalists that look at goods trade flows as zero-sum games, so our challenges are more systemic.

Trade has always been busy an irritant with the US while dealing with India, but it didn't acquire the dimensions it has under the Trump administration before. How do you explain this?

It does start with India.

The Modi government has imposed more trade barriers than either the Vajpayee or Singh governments had done.

It started with India's postponement of global adoption of the World Trade Organisation Trade Facilitation Agreement early in its term in 2014.

The Modi government has steadily increased customs duties in a range of sectors such as automobiles, auto components, cosmetics, electronics, and more.

Many of these anti-import steps preceded the Trump administration.

But President Trump is certainly the most aggressive US president in recent history in terms of pushing back hard against nations that seem to block imports of US products.

Was there the possibility of a serious threat that the trade dispute with India would spiral out of control the way it has with China? And what will India need to do to reach a trade deal with the US in the next few months?

That possibility still exists, thought the stakes are lower.

The US is India's most important trade partner, but India is not yet a key player in total global trade flows.

So US-India tensions could continue to mount, but the world won't have to worry about a big re-organisation of global supply chains.