News
Business
Movies
Sports
Cricket
Get Ahead
Money Tips
Shopping
Sign in  |  Create a Rediffmail account
Rediff.com  » News » We will destroy IS or anyone that tries to harm us: Obama

We will destroy IS or anyone that tries to harm us: Obama 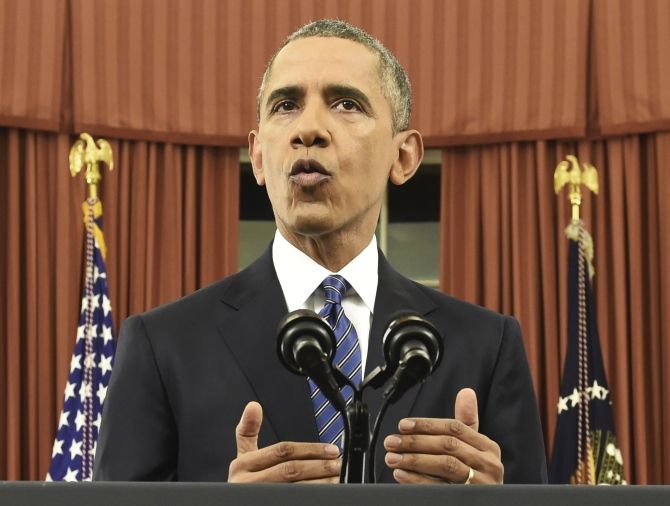 Reaffirming his commitment to destroy the Islamic State, United States President Barack Obama said America will destroy any militant organisation that tried to harm its people but ruled out sending large scale troops on the ground as done in the case of Afghanistan and Iraq.

In a rare address to the nation from his Oval Office of the White House, Obama said his strategy to destroy ISIS is designed and supported by US military commanders and counter-terrorism experts, together with 65 countries that have joined an American-led coalition.

Obama said the threat from terrorism is real, but US will overcome it. "We will destroy ISIL (another name for ISIS) and any other organisation that tries to harm us," he said.

"Our success won't depend on tough talk, or abandoning our values or giving into fear. That's what groups like ISIL are hoping for. Instead, we will prevail by being strong and smart, resilient and relentless. And by drawing upon every aspect of American power," he added.

In his speech, Obama ruled out sending large scale troops on the ground. "We should not be drawn once more into a long and costly ground war in Iraq or Syria. That's what groups like the IS want. They know they can't defeat us on the battlefield. IS fighters were part of the insurgency that we faced in Iraq," he said.

"But they also know that if we occupy foreign lands, they can maintain insurgencies for years, killing thousands of our troops and draining our resources, and using our presence to draw new recruits," said the US President.

"The strategy that we are using now -- air strikes, special forces, and working with local forces who are fighting to regain control of their own country -- that is how we'll achieve a more sustainable victory, and it won't require us sending a new generation of Americans overseas to fight and die for another decade on foreign soil," Obama said.

This was Obama's only third speech from the Oval House in seven years. The previous two addresses, both in 2010, covered the Deepwater Horizon oil spill and the end of combat operations in Iraq.

Stating that the US military will continue to hunt down terrorist plotters in any country where it is necessary, he said, "In Iraq and Syria, air strikes are taking out IS leaders, heavy weapons, oil tankers, infrastructure."

"And since attacks in Paris, our closest allies, including France, Germany, and the United Kingdom, have ramped up their contributions to our military campaign which will help us accelerate our effort to destroy IS," said the US President.

"Second, we will continue to provide training and equipment to tens of thousands of Iraqi and Syrian forces fighting ISIL on the ground so that we take away their safe havens," he said.

In both countries, the US is deploying special operations forces who can accelerate that offensive. "We've stepped up this effort since the attacks in Paris, and will continue to invest more in approaches that are working on the ground. Third, we're working with friends and allies to stop the IS's operations, to disrupt plots, cut off their financing, and prevent them from recruiting more fighters," he said.

"And we constantly examine our strategy to determine when additional steps are needed to get the job done," he said.

"For over a year, I have ordered our military to take thousands of air strikes against IS targets. I think it's time for Congress to vote to demonstrate that the American people are united and committed to this fight," he said, but ruled out sending large-scale troops on the ground.

Further in his address to the nation, Obama said, "Over the last few years, however, the terrorist threat has evolved into a new phase."

"As we've become better at preventing complex multifaceted attacks like 9/11, terrorists turn to less complicated acts of violence like the mass shootings that are all too common in our society. It is this type of attack that we saw at FortHood in 2009, in Chattanooga earlier this year, and now in San Bernardino," he said.

Obama decided to address the nation in the aftermath of the San Bernardino terrorist attack by a radicalised couple Pakistani national Tashfeen Malik, and her husband, Syed Rizwan Farook, of Pakistan origin.

"This was an act of terrorism designed to kill innocent people. Our nation has been at war with terrorists since Al Qaeda killed nearly 3,000 Americans on 9/11," he said.

"In the process, we've hardened our defences, from airports, to financial centres, to other critical infrastructure. Intelligence and law enforcement agencies have disrupted countless plots here and overseas and worked around the clock to keep us safe," he said.

Noting that over the last few years the terrorist threat has evolved into a new phase, Obama said: "As groups like IS grew stronger amidst the chaos of war in Iraq and then Syria, and as the Internet erases the distance between countries, we see growing efforts by terrorists to poison the minds of people like the Boston Marathon bombers and the San Bernardino killers.

Stating that for seven years he has confronted this evolving threat every morning in his intelligence briefing, Obama said since the day he took over the President's office, he has authorised US forces to take out terrorists abroad precisely because he knows how real the danger is.

"As commander in chief, I have no greater responsibility than the security of the American people. As a father to two young daughters who are the most precious part of my life, I know that we see ourselves with friends and co-workers at a holiday party like the one in San Bernardino. I know we see our kids in the faces of the young people killed in Paris," he said.

"And I know that after so much war, many Americans are asking whether we are confronted by a cancer that has no immediate cure," Obama said.

Image: US President Barack Obama speaks about counter-terrorism and the United States fight against Islamic State during an address to the nation from the Oval Office of the White House in Washington. Photograph: Paul Loeb/Pool/Reuters