Doctors in West Bengal called off their week-long strike on Monday night after meeting Chief Minister Mamata Banerjee who assured them of steps to scale up security at government hospitals in the state. 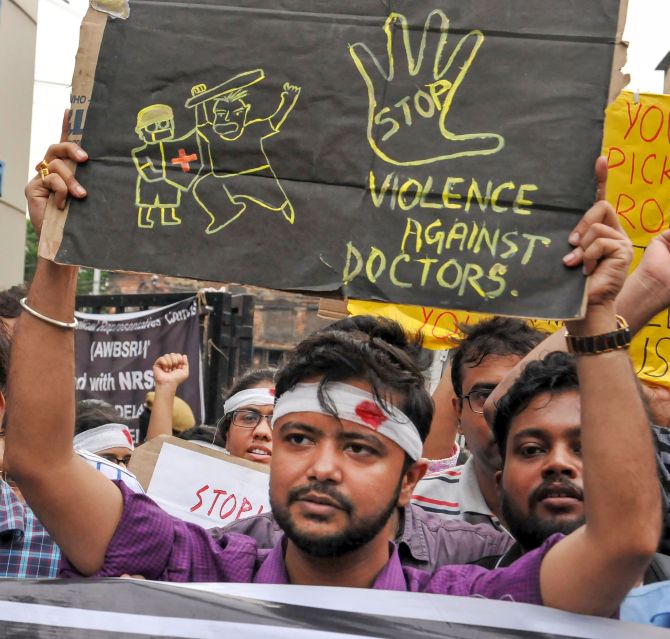 The breakthrough came on a day health services especially Outpatient Departments were crippled across the country as doctors held protests and boycotted work to show solidarity with their colleagues in West Bengal who were on strike since Tuesday protesting assault on their two colleagues by kin of a patient who died in NRS Hospital and Medical College.

At an hour-long televised meeting with representatives of doctors, Banerjee announced a number of steps, including asking police to appoint nodal officers for security of doctors at all government hospitals in the state, following which the doctors agreed to end the stir.

The formal announcement was made after a general body meeting of the joint forum of doctors at the NRS Hospital, the epicentre of the agitation.

A spokesperson of the joint forum told reporters that the doctors will return to work as they want to give the state government some time to act on its promises, but they will review the implementation of the steps.

"Our meeting and discussion with the CM met a logical end. We temporarily withdraw from our ceasework. Considering everything we expect the government to solve the issues as discussed in due time," he said.

Earlier, the protesting doctors had rebuffed the chief minister's offer for talks expressing apprehension about their security after she proposed a "closed door" meeting at state secretariate Nabanna.

Banerjee had visited the SSKM hospital on Thursday and had warned of strict action against the striking doctors. She had alleged that the Bharatiya Janata Party and Communist Party of India-Marxist were instigating the protesters and giving it communal colour.

However, the two sides softened their stands over the weekend.

The end of the strike came as a big relief to hundreds of patients as health services have been disrupted across the state for seven days.

The West Bengal doctors received support from across the country. On the call of Indian Medical Association, medicos in Delhi and other states withdrew from non-emergency healthcare services. 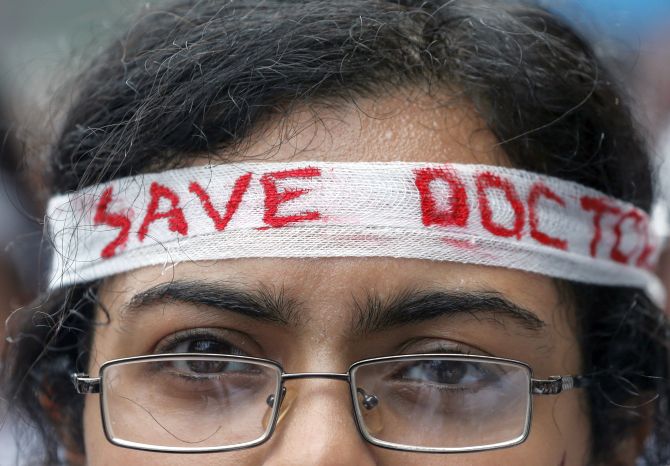 IMAGE: Doctors have been on strike for a week demanding better security after one of their colleagues was attacked in a hospital. Photograph: Sivaram V/Reuters

Though Banerjee had agreed to the protestors' demand of holding discussion with them in an "open session" in the presence of media, the state government allowed only two regional news channels to cover the meeting. Other media representatives stayed outside the venue.

West Bengal health secretary, Minister of state for health Chandrima Bhattacharya and other state officials were present at the meeting, besides 31 junior doctors.

The doctors apprised the chief minister of their concerns and said that they fear for their safety while on duty.

Banerjee directed formation of grievance redressal units in all state-run hospitals as proposed by the junior doctors.

"We have decided in our governing body meeting that we will be returning to work as soon as possible," the spokesperson for doctors' forum said.

"We want to thank the chief minister for giving us some time. We want to give the state government some time to implement the promises they made to us. We also thank the common people.... We also seek forgiveness from them who have suffered the most," he said.

The representatives of the joint forum of junior doctors also sought exemplary punishment for those involved in the assault on doctors at NRS Medical College and Hospital on June 11.

The chief minister visited Paribaha Mukhopadhyay, one of the two injured, at the private hospital where he is under treatment. It was one of the demands of the agitating doctors.

West Bengal Governor Keshari Nath Tripathi expressed happiness over withdrawal of strike. The agitating doctors had earlier met the Governor and urged him to direct the state government to provide security to doctors.

Opposition parties in West Bengal also welcomed the decision by the doctors and urged the state government to ensure conducive working atmosphere and infrastructure for the doctors working in government hospitals.

The doctors strike in Bengal had triggered a political slugfest between the Trinamool Congress and the BJP, which has intensified its attacks on Banerjee after winning 18 Lok Sabha seats in the state, only four less than TMC.

The Union Home Ministry too had stepped in, issuing an advisory to West Bengal government on doctors strike.

Banerjee, however, dismissed them and accused "outsiders" for fanning the agitation. 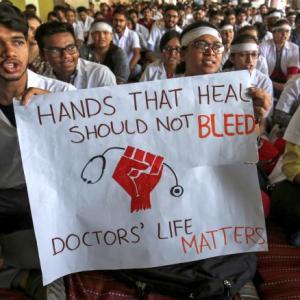 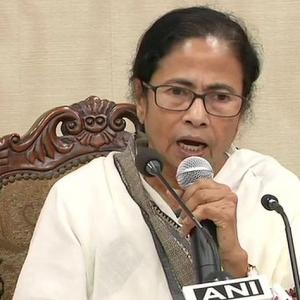