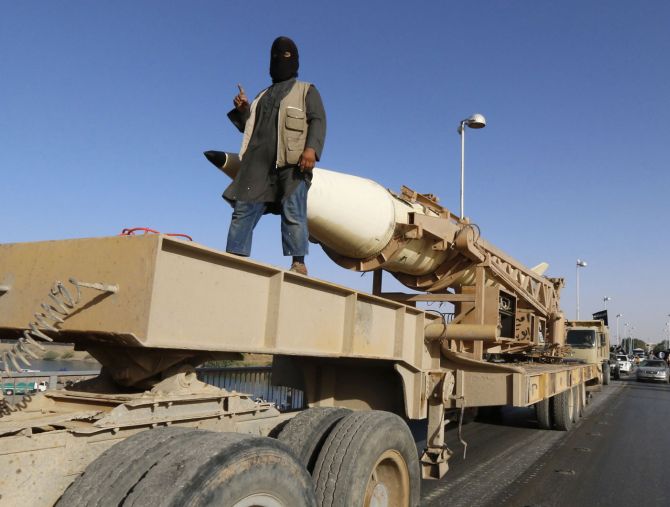 An audio slideshow in which Hizbul Mujahideen commander Zakir Moosa is purportedly speaking about establishing an Islamic caliphate in Kashmir has gone viral in the Valley.

The 5.40-minute long clip also warns separatist leaders of Kashmir not to meddle in the move to set up a caliphate in Jammu and Kashmir along the lines of the rule established by the Islamic State in parts of Syria and Iraq.

It may signal a worrying turn in Kashmir’s insurgency. The movement so far has largely been about independence or annexation with Pakistan, without emphasising Islam or connecting it to jihad.

The Hizbul Mujahideen is nearly as old as the Kashmiri militancy which started in 1989. The group is made up almost entirely of local youths, and had always campaigned for joining Pakistan.

In the clip, the speaker asks separatists either to fight along with terrorists in the field or refrain from making statements about the armed struggle.

The clip surfaced after a recent move by Hurriyat leaders to downplay fears of the growing influence of the IS in the Valley.

Earlier this week, Hurriyat leaders Syed Ali Shah Geelani, Mirwaiz Umer Farooq and Yaseen Malik issued a joint statement in which they claimed that the Kashmir struggle had nothing to do with the IS, Al Qaeda and other such organisations.

In a statement on Friday, Hizbul Mujahideen supreme commander Syed Sallahuddin also said there was no place for groups such as IS, Al Qaeda or the Taliban in Jammu and Kashmir.

‘This movement is purely local and indigenous. It has no international agenda. Al Qaeda, Daesh or Taliban have no involvement or role in Kashmir,’ he said.

While confirming that the voice in the slideshow was that of Moosa, senior police officials did not rule out the possibility that the banned IS terror group was trying to create a base in the Valley.

The security agencies had warned that internet chats and establishing of contacts with possible handlers in Syria and Iraq by some youths have grown in the last six months.

Last month, two masked gunmen appeared at the grave of a Hizbul Mujahideen terrorist in Pulwama during which they asked the gathering to follow the rules laid down by the Taliban and IS, and not support or raise slogans in favour of Pakistan.

For over three minutes, they spoke about pan-Islamisation and the importance of having Shariat as a law and fled after firing shots in the air.

Terror outfits including the United Jehad Council, a conglomerate of terror outfits based in Pakistan-occupied Kashmir, as well as separatists were quick to downplay the incident but security officials viewed it with more seriousness.

Security agencies felt that if the growing influence of IS was not checked, it could adversely affect the already precarious situation in the Valley.

They said chats and contacts between Kashmiri youth and possible handlers in Syria and Iraq had grown in the last six months.

There was no specific information about the Internet users other than the fact that they were from villages in South Kashmir, Sopore in North Kashmir, Prang and Lar in Central Kashmir as well as Reasi, Kishtawar and Doda areas of Jammu region, the agencies said.

During the recent protests across the Valley, IS flags were waved in some areas. Slogans supporting the banned terror outfit were also up on some walls.

The Indian Army has also been worried about the growing influence of the IS ideology on the Valley’s youth.