News
Business
Movies
Sports
Cricket
Get Ahead
Money Tips
Shopping
Sign in  |  Create a Rediffmail account
Rediff.com  » News » VHP chief says temple to be built by 2024 as per Nyas design 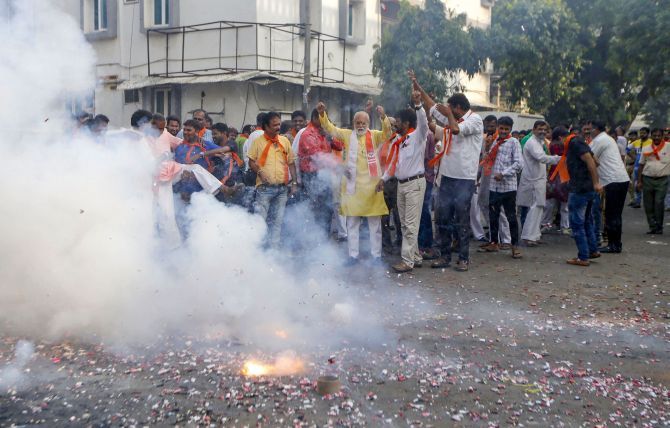 Welcoming the Supreme Court verdict in the Ayodhya case, Vishwa Hindu Parishad international president Vishnu Sadashiv Kokje on Saturday hoped that a grand temple will be built at the site as per a design prepared by the Ram Janmabhoomi Nyas.

He was confident that the temple will be built by the trust -- which is to be formed as per the court's order -- before 2024, he said.

The Supreme Court in a unanimous verdict on Saturday cleared the way for the construction of a Ram Temple at the disputed site at Ayodhya, and directed the Centre to allot a 5-acre plot to the Sunni Waqf Board for building a mosque.

Ram Janmabhoomi Nyas was formed by the members of the VHP on December 18, 1985, with the aim of constructing a grand temple at Ram Janmabhoomi in Ayodhya.

"There is no question of loss or victory of any of the parties concerned after the Supreme Court's verdict in Ayodhya case because the apex court has resolved centuries' old issue by delivering a balanced judgment. This is a welcome decision because justice has been done," Kokje told PTI.

"In the light of Supreme Court decision, we understand that necessary decisions for the construction of Ram temple in Ayodhya are to be taken under the supervision of the trust to be formed by the government," he added.

He said the VHP was expecting a grand temple to be built according to the design prepared by Ram Janmabhoomi Nyas, claiming that the Nyas had done a lot of preparatory work, including carving a large quantity of stones.

"The adoption of this design would be convenient to the (proposed) trust," Kokje, a former judge of the high courts of Madhya Pradesh and Rajasthan, said.

Talking to reporters later in Gujarat, Kokje expressed confidence that a grand temple would be built by 2024.

"Now as the court has given its verdict, a grand Ram temple will be built at the same spot in Ayodhya. Just like getting the land was a challenge, it will also be a challenge to build and run the temple. It will become an important pilgrimage place of India. I believe that the temple would be built before 2024," Kokje said.

He added that stone carving work for two floors has already been completed.

"There is no reason to have apprehensions at this stage about the functioning of the trust. Why should we assume today that the trust would go against us? I am sure the trust will work with Ram Janmabhoomi Nyas to construct the temple," he said.

"Moreover, there is no reason to believe that people who are against the temple will be inducted as trustees. There will be only Ram bhakts, I think," he added.

When asked about VHP's views on political leaders who would try to take credit for this verdict, Kokje said people understand everything.

"There is a saying that success has many fathers while failure is orphan. So, it is obvious that some people will try to take credit. That will happen. But people understand everything. Our work is before them. People know what we have done for this," he said.