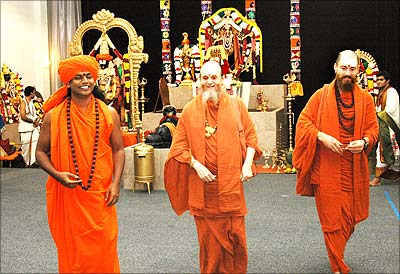 A Vedic temple housing more than a hundred deities, including the tallest images of Lord Venkateshwara and Lord Nataraja in North America, was inaugurated in Montclair, California.

At the temple -- the result of a vision of Paramahamsa Nithyananda, founder of the Nithyananda Mission and the Nithyananda Vidyapeetham -- Vedic knowledge, Vedic rituals and Vedic lifestyle all come together under the same roof.

The prana pratishta (infusion of life energy into the deities) and kumbhabhishekam (consecration) of the Nithyananda Vedic Temple were performed during a three-day celebration recently.

The temple intends to provide all four pillars of Vedic tradition -- yoga, meditation, a temple and a seat of higher learning for all dimensions of Vedic culture and tradition. 'This temple will serve as the headquarters for the West to radiate enlightening Vedic sciences in all its dimensions,' Nityananda said at the inauguration.

The ceremonies were steeped in Vedic traditions. Seven different rituals were performed for prana pratishta. Nithyananda conducted the shanmatha (six streams) ritual. The kumbhabhishekam (consecration) came after that.

The shanmatha are represented by statues of Lord Nataraja (the dancing Shiva), Lord Venkateshwara (Vishnu), Devi, Lord Ganapathy, Lord Subramanya with his two wives and Lord Surya. The temple offers a unique blend of all religions of the Vedic tradition -- Jainism, Buddhism, and Sikhism, represented by Lord Buddha, the 24 Jain Tirthankaras and the Guru Granth Sahib, respectively.

After the maha arathi, a feast blessed by the swami and mahaprasad, consisting of 1008 items, was offered to the deities. Lakshaarchana, the 108 kalasa abhishekam (offering of 108 pots of energised water from 21 holy rivers of India), the 1008 shanku abhishekam (offering with 1008 conches) and the thiru kalyana utsavam -- the marriage of the deities -- were all performed while the swami explained the significance of every step in the Vedic marriage ritual.

Later, Nithyananda guided hundreds of devotees through the Sri Vidya Puja, a technique to awaken and integrate the 43 energies within each person by letting go and surrendering himself to the universal mother energy. These energised Sri Chakra yantras, before which the devotees performed puja, were given as prasad.

The inauguration ceremony was attended by Satguru Bodhinatha Veylanswami of the Kauai Hindu monastery, the publishers of Hinduism Today magazine; Swami Sarvadevananda of the Vedanta Society, Los Angeles, and local government officials as well as Republican Senatorial candidate Harry Sidhu. The California state Senate and the city of Montclair presented Nithyananda with certificates of recognition.

The highlights of the other programs included discourses at the Ananda Sabha (Hall of Bliss) by Nithyananda on the Shiva Sutras. The Shiva Sutras is the dialogue between Lord Shiva and his consort Devi, where Shiva reveals to her meditation techniques for attaining the state of enlightenment.

'Meditation is the core message of Vedic tradition. Diving into the deep silence in your inner space is the technique for true Vedic knowledge to happen in you,' Nithyananda said. Other events included a blood donation drive, and cultural presentations of dances, songs, and chants by local and professional artists. These performances, from a number of ethnic and religious traditions, included the Gurbani by Covina Gurudwara, Sufi music by Tasnima Hermila, Carnatic music by Babu Parameshwaran, Buddhist chanting by the Hsi Lai temple, and devotional songs written and sung by devotees.

The temple complex also houses sculptures and artifacts presented by Nithyananda Sacred Arts which is dedicated to the preservation and promotion of ancient temple arts and support the skilled artisans of India and South East Asia. The Vedic temple also has a yoga studio, a library with 100,000 books on spirituality and religion from all traditions across the world, and a galleria of books, DVDs, CDs, Indian jewelry etc.

'The Indian community has invested billions of dollars across the United States in constructing temples. Hardly any investment or efforts have been made into building a center which can help us understand, sustain and propagate the Vedic culture and tradition,' Nithyananda noted.

'The center will house a yoga center, a meditation hall, a Vedic temple hosting over a hundred deities including the tallest Venkateshwara and Nataraja, and will be a seat of higher learning for all dimensions of Vedic culture and tradition.'

The Vedic Temple is built on two acres, with a building area of 24,000 square feet. The temple offers all six traditions of Vedic worship with 6 major shanmatha deities - Ganesha, Subramanya, Lord Shiva, Lord Vishnu, Devi and the Navagrahas. The meditation hall has, among others, 108 Taandava moorthis, 108 Shiva lingas, the deities of 180 enlightened masters of the Vedic tradition, including Shirdi Sai Baba, the 24 Jain Tirthankaras, Lord Buddha, the Guru Granth Sahib and the 63 Nayanmars (enlightened masters of Tamil Nadu Shaivite tradition).