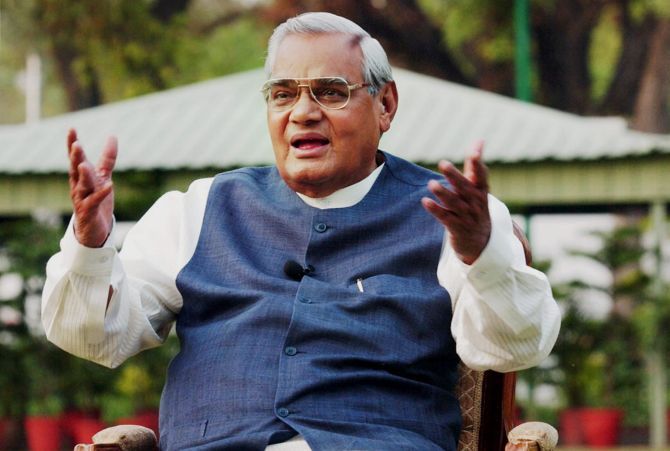 The condition of former prime minister Atal Bihari Vajpayee, who was admitted to the All India Institute of Medical Sciences in New Delhi with urinary tract infection, lower respiratory tract infection and kidney issues, was stable on Tuesday, the hospital said.

The 93-year-old leader was admitted to the hospital on Monday.

In the latest medical bulletin issued by AIIMS, the hospital said that he 'continues to respond well to treatment'.

Earlier in the day, in a statement, the hospital said, 'His condition is stable. He is responding to treatment and is on injectable antibiotics. All his vital parameters are stable. He will continue to be in hospital till infection is controlled.'

A team of doctors, under the supervision of AIIMS Director Randeep Guleria, evaluated his condition, a source said.

The former prime minister underwent dialysis on Monday and continued to remain in the intensive care unit of the cardiothoracic centre of the AIIMS, the source said.

Vajpayee, a diabetic, has one functional kidney. He suffered a stroke in 2009, weakening his cognitive abilities. Later, he developed dementia.

The entire corridor of the first-floor ICU has been cordoned off and only patients' attendants or relatives are being allowed after showing proof.

Pankaj Jain, treasurer of Delhi BJP Yuva Morcha, performed a 'havan' outside the gate number one of the hospital, praying for Vajpayee's quick recovery and long life.

On Monday, the hospital said Vajpayee, who had been ailing for long, was admitted for routine check-up and investigations.

Modi met the doctors and enquired about the well-being of Vajpayee. He also met his family members, according to an official statement issued on Monday.

The BJP, on Monday, had said in a statement that Shah had a detailed discussion with the doctors about Vajpayee's treatment and also met the former prime minister's family members at the hospital.