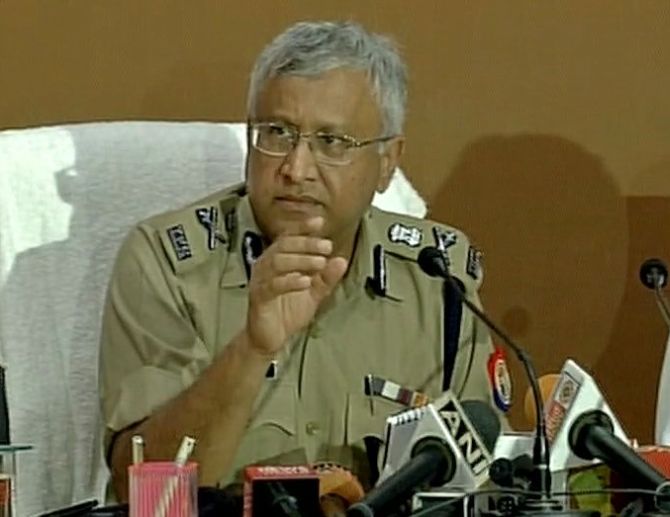 Uttar Pradesh Director General of Police Javeed Ahmed was on Friday shunted to a less important post by the Yogi Adityanath government, which transferred 12 IPS officers in the first big reshuffle in the top police hierarchy.

1980-batch IPS officer Sulkan Singh, who was DG-Training, will replace Ahmed, a 1984-batch IPS officer, who has been shifted as the DG of Uttar Pradesh Provincial Armed Constabulary, a senior home department official said.

Singh is likely to have a brief stint as the state police head as his superannuation is due in September.

The chief minister has not minced words in sending out a strong message that law and order was his government's top priority and any laxity in this regard would not be tolerated.

During the recent assembly polls, the Bharatiya Janata Party had petitioned the Election Commission to remove Ahmed, alleging that he was working at the behest of the then Samajwadi Party government.

DG-Intelligence Jawahar Lal Tripathi has been made DG-Prosecution and DG-Homeguards Alok Prasad has been given additional charge of Training.

Surya Kumar has been relieved from post of DG-Prosecution and will continue as DG police recruitment and promotion board.

IG Women Powerline Navneet Sikera has been relieved from the charge of PAC central zone but will continue on other posts.

Earlier in the day, the state government transferred seven IAS officers including some divisional commissioners.

Among others transferred included DM Jhansi Ajay Kumar Shukla, who will be Divisional Commissioner Chitrakoot division, and Secretary Khadi Anurag Yadav, who has been sent to Institutional Finance Department in the same capacity.

The state government had on Tuesday shunted out tainted Vice Chairman of Lucknow Development Authority Satyendra Singh while effecting a major bureaucratic reshuffle involving 44 IAS officers in the second such drill in less than a week.

Singh, who is mired in controversy over alleged corruption in LDA, was put on wait list on the day the Adityanath government completed one month in office.

In its first major bureaucratic reshuffle on April 12, the state government had transferred 20 senior IAS officers shunting out Principal Secretary Information Navneet Sehgal and others who wielded considerable influence under the Akhilesh Yadav dispensation.

Sehgal was stripped of all key charge and replaced by UP cadre IAS officer Avanish Kumar Awasthi, who was relieved by the Centre on Aditaynath's request after he took over the reins of the state on March 19.