Don't campaign for the donkeys of Gujarat: Akhilesh to Amitabh

Uttar Pradesh Chief Minister Akhilesh Yadav on Monday had a piece of advice for megastar Amitabh Bachchan, "don't advertise for the donkeys of Gujarat". 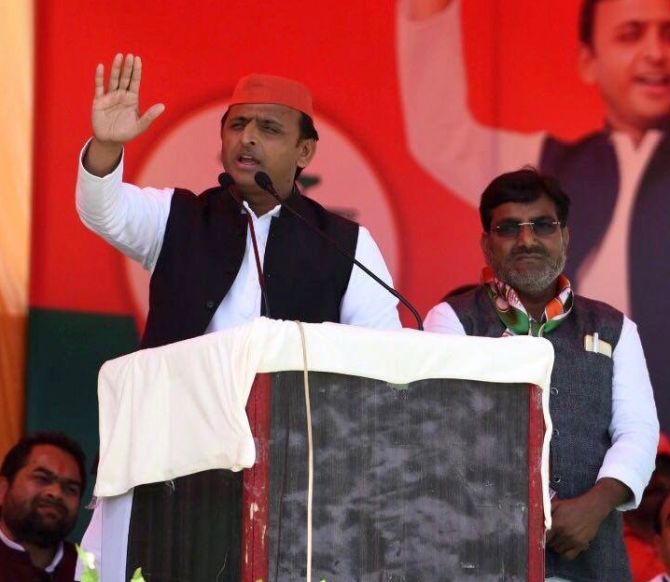 Without taking any name, he referred to the advertisement in which Bachchan, the brand ambassador of Gujarat Tourism, is seen inviting tourists to visit the Wild Ass Sanctuary located in Little Rann of Kutch in the state.

"What will happen if the donkeys also start getting advertised?," the UP CM asked the audience.

The bitter remarks came at a time when parties are racing to the finish line of the state polls described by many as the semi-final before the 2019 Union election.

Uttar Pradesh minister and Samajwadi Party candidate Gayatri Prajapati, booked in a rape case, was conspicuous by his absence at an election rally of Akhilesh Yadav in his constituency on Monday.

On the directives of the Supreme Court, UP Police has filed an FIR against the senior SP leader in connection with separate cases of gangrape and attempt to rape another woman and her minor daughter.

Opposition parties have made it a big issue with the Bharatiya Janata Party targeting Priyanka Gandhi Vadra over her poll campaign in Rae Bareli for the Congress-SP alliance, saying it was unfortunate that she was seeking votes for those accused of "rape and murder".

Steering clear of the controversy, Akhilesh exuded confidence that the SP-Congress alliance would form the next government in Uttar Pradesh.

"Samajwadi people have the habit of cycling against the wind. Out of enthusiasm, the Samajwadis tend to leave the handle of the 'cycle' (its poll symbol). But, with the Congress holding the handle of the bicycle with its 'hand', the journey will be smooth," he said.

Addressing an election rally at Gauriganj in Amethi district, Akhilesh during the course of his entire speech did not make any reference to his controversial cabinet colleague, who was conspicuous by his absence.

He said the people of the country have not been able to understand Prime Minister Narendra Modi's 'Mann ki Baat', referring to his radio address to the nation.

Earlier, addressing a rally in Unchahar assembly constituency in Rae Bareli district, Akhilesh accused the prime minister of spreading lies about discrimination in power supply during Ramzan and Diwali.

Akhilesh also claimed that he ensured 24-hour power supply for Varanasi after a request to do so came from veteran BJP MLA Shyamdeo Roy Chowdhury. "If he (Modi) claims himself to be son of Ganga Maiyya, then he should answer whether the SP is giving 24-hour power supply to Varanasi or not," the SP national president said.

He had said if the state government is giving 24-hour power supply during Ramzan, the same provisions should be made during Diwali too. 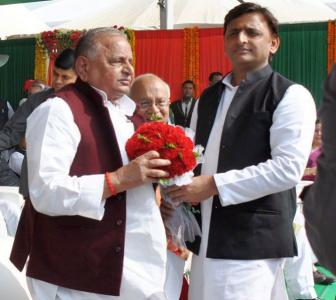 UP polls: Will transform Bundelkhand like Kutch, says PM Modi