Police have booked the management of a cancer hospital in Meerut after it put out an advertisement saying it would treat Muslims only when they produce a report showing they have tested negative for coronavirus. The newspaper advertisement released by the Valentis Cancer Hospital on Friday also said most Hindus and Jains are “misers”, and asked them to contribute to the prime minister's fund to help fight coronavirus.

Facing flak on social media, the hospital came up with another advertisement on Sunday, carrying an apology.

The original advertisement blamed the Tablighi Jamaat -- whose congregation in Delhi last month was seen as a coronavirus hotspot -- for spreading the disease in the country and then set conditions for admitting Muslim patients.

They must get themselves and their attendants tested for coronavirus and bring the report along, it said.

Asked to comment on the controversial advertisement, Meerut's Chief Medical Officer Raj Kumar said, “This is certainly wrong and we are sending a notice to the administration of the concerned hospital.”

He said further action will be taken after a reply is received from them.

In the second advertisement issued Sunday, the hospital said it apologises if anyone's sentiments are even slightly hurt.

Referring to the coronavirus pandemic, the hospital said it wanted people of all religions to fight the emergency together.

“We never had the intention to hurt anyone's feelings. If anyone from the Hindu, Muslim, Jain, Sikh or Christian community has been hurt, we extend our heartfelt regrets.

The new advertisement said the hospital was wrong in calling Hindus and Jains “misers”.

The hospital administration could not be contacted despite several attempts. 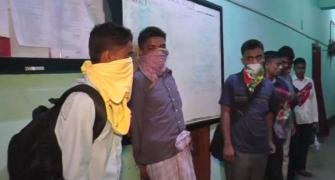