News
Business
Movies
Sports
Cricket
Get Ahead
Money Tips
Shopping
Sign in  |  Create a Rediffmail account
Rediff.com  » News » Udupi students say they will not go to college without hijab

Udupi students say they will not go to college without hijab

The Muslim girls from Udupi whose petitions seeking permission to wear the hijab inside classrooms were dismissed by the Karnataka high court, said on Tuesday that they will not go to college without the hijab and fight the case legally till they get "justice". IMAGE: Police personnel at the entrance of the Karnataka high court, in Bengaluru, March 15, 2022, ahead of its verdict in the hijab case. Photograph: Shailendra Bhojak/PTI Photo.

They also claimed the verdict was 'unconstitutional'.

"We had approached the high court seeking permission to wear the hijab in classrooms. The order has come against us. We will not go to the college without the hijab but we will fight for it. We will try all the legal ways. We will fight for justice and our rights," one of the girls said in a press conference in the coastal town of Udupi.

"The verdict which came today is unconstitutional...the Constitution itself provides us (our rights) to follow my religion and whatever I can wear," the girl stated and also referred to a government order on February 5 banning any clothes that disturbed peace,  harmony and public order on the campus.

According to them, the circular came only after they approached the HC.

Accusing the government of 'creating an issue' by issuing a circular, the girls alleged it was done to create pressure.

"How much issue they made, oh my God! They made an issue for all the colleges. They have denied education to all the girls. This was done to create pressure...," the girl charged.

She reiterated that the hijab was an essential part of her religion. 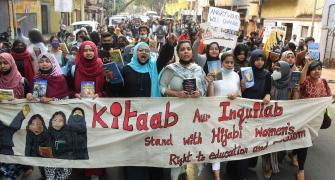 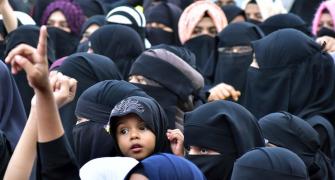 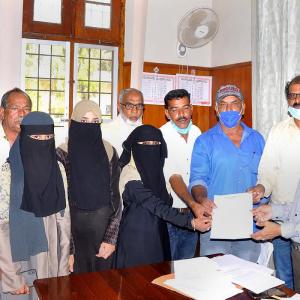