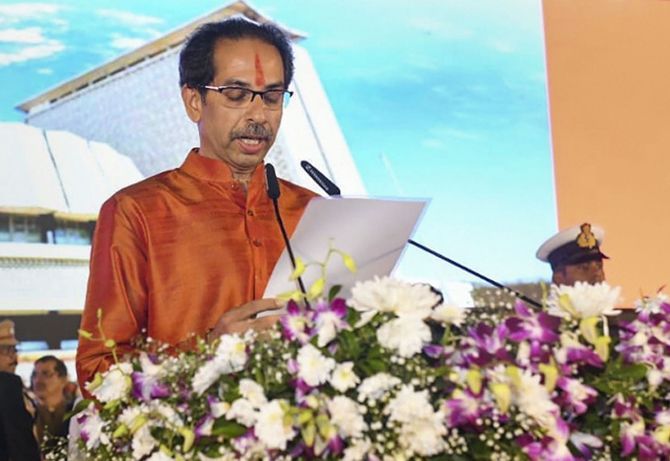 The 59-year-old is the third Sena leader and first from the Thackeray family to occupy the post.

His father Bal Thackeray wielded the 'remote control' over the first Sena-Bharatiya Janata Party government during 1995-99 but never assumed a position in the government. IMAGE: The 59-year-old is the third Sena leader and first from the Thackeray family to occupy the post. Photograph: PTI Photo 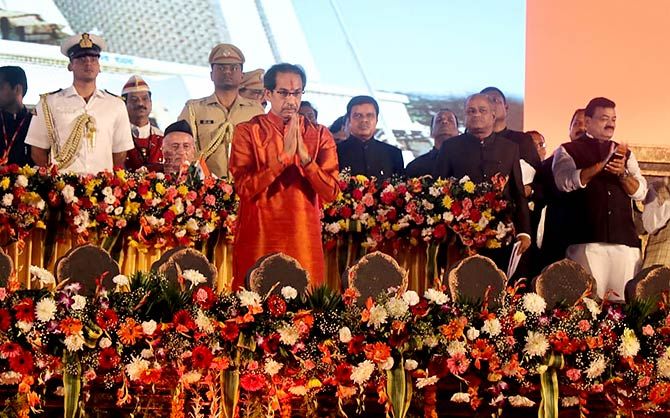 IMAGE: Dressed in an orange kurta, Thackeray took oath in front of thousands and thousands of people. Photograph: Hitesh Harisinghani/Rediff.com

Congress chief Sonia Gandhi was among those invited but she wasn't present. She sent congratulatory messages to Uddhav and MPCC chief Balasaheb Thorat, who was among the six ministers sworn in.

'I am confident he will work diligently for the bright future of Maharashtra,' Modi tweeted. 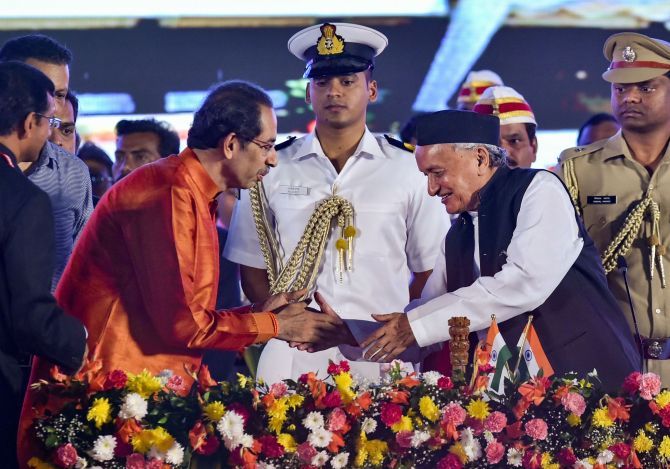 Thackeray took oath as chief minister over a month after results of the October 21 Maharashtra assembly elections were declared on October 24. 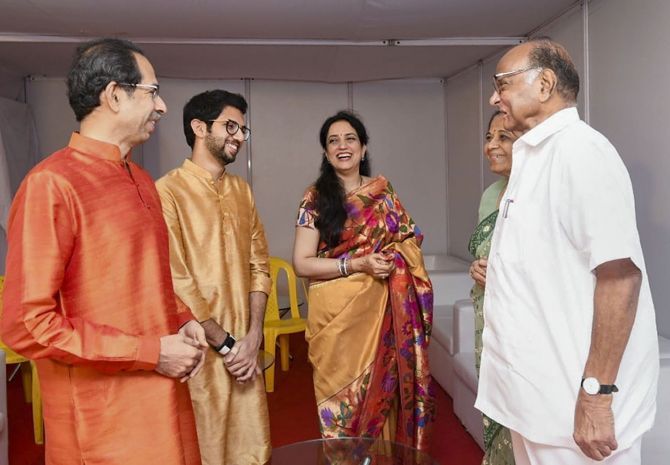 The BJP emerged as the single largest party winning 105 seats. The Shiv Sena, NCP and Congress won 56, 54 and 44 seats respectively in the 288-member Maharashtra Assembly.

Thursday's swearing in ceremony came after days of dramatic political developments, which included a three-day government formed by BJP's Devendra Fadnavis with unexpected support from NCP leader Ajit Pawar, who has since returned to the Sharad Pawar-led party fold. There was speculation that Ajit Pawar would be sworn in as deputy chief minister on Thursday but only two ministers from the NCP took oath at the ceremony.

A special session of the 14th state assembly was held on Wednesday where oath was administered to 285 newly-elected members by pro tem Speaker Kalidas Kolambkar who was appointed to the post by Governor Bhagat Singh Koshyari. An ace photographer, the otherwise affable, mild-mannered politician, displayed combative traits of his father in dealing with the BJP on the demand for rotational chief ministership just after assembly poll results were announced.

In rallies, Uddhav had repeatedly voiced his resolve to fulfil the dream of his father to make a Shiv Sainik the chief minister, and ended up donning the mantle himself. Hours before the swearing in ceremony, the Shiv Sena-NCP-Congress alliance said the Maharashtra Vikas Aghadi government in the state would waive farmers' loans and ensure 80 per cent quota in jobs to the local youth. IMAGE: A portrait of Balasaheb Thackeray is held up by Sena supporters at the event. Photograph: Hitesh Harisinghani/Rediff.com A law will be enacted to ensure 80 per cent job quota for locals/domicile youth, it said.

Source: PTI© Copyright 2021 PTI. All rights reserved. Republication or redistribution of PTI content, including by framing or similar means, is expressly prohibited without the prior written consent.
Related News: Uddhav Thackeray, Shiv Sena, Maharashtra
SHARE THIS STORY
Print this article