Post-K'taka euphoria, BJP gets MP jolt as 2 MLAs back Congress

In a jolt to the opposition Bharatiya Janata Party in Madhya Pradesh, two of its MLAs backed the seven-month-old Congress-led government during the voting on a bill in the assembly on Wednesday. 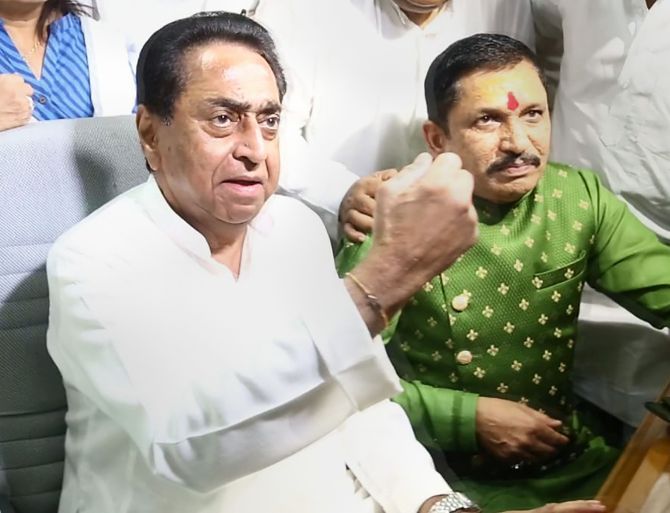 The Congress claimed that more BJP MLAs could join it.

BJP legislators Narayan Tripathi and Sharad Kol voted in favour of the Criminal Law (Madhya Pradesh Amendment) Bill, 2019 when it was put to vote in the assembly.

"Several BJP MLAs are in touch with chief minister Kamal Nath. They are sitting on the fence. They may cross over to the Congress by the next assembly session," claimed public relations minister P C Sharma, talking to reporters later.

During the division of votes on the bill, 122 MLAs voted in favour of the Congress government.

In the 230-member house, the ruling Congress has support of 121 MLAs, including speaker N P Prajapati, who did not take part in the voting.

Thus, besides the 120 MLAs of the Congress and its allies, two BJP MLAs also supported the bill.

Talking to reporters later, Tripathi, who is MLA from Maihar, and Beohari legislator Kol said they extended support to the seven-month old Nath government because they wanted development in their constituencies.

This was their "ghar wapsi" (homecoming), they added.

According to Congress sources, Nath sent feelers to the two BJP lawmakers through Arif Masood, Congress MLA from Bhopal Central, about a month ago.

Tripathi reportedly did not get along with BJP MP from Satna Ganesh Singh. Besides, he had been seeking to make Maihar, a tehsil of Satna, a separate district.

Tripathi, who had a long stint in the Congress before joining the BJP, was once in the Samajwadi Party and headed its Madhya Pradesh unit.

Kol, as a Youth Congress leader, had sought party ticket from the Beohari for the last year's assembly polls.

Miffed over denial of ticket, he joined the BJP and the saffron party fielded him from Beohari where he won.

Kol's father Juglal Kol is a senior Congress leader from Shahdol district. Nath, who is also the state Congress president, persuaded Sharad Kol's father to bring him back in the Congress fold, the sources said.

Leader of Opposition Gopal Bhargava had, in May, written to the governor requesting a special session of the Assembly for floor test, shortly after the BJP swept the Lok Sabha polls in Madhya Pradesh, winning 28 of the 29 seats.

The Congress has 114 MLAs -- two short of the simple majority mark of 116 -- and its government is supported by four Independent legislators, two MLAs of the Bahujan Samaj Party and one from the Samajwadi Party.

The BJP had won 109 seats and one of its MLAs resigned after getting elected to the Lok Sabha.

The assembly polls saw the Congress ending the 15-year -long rule of the BJP in the state.

Wednesday's development in Madhya Pradesh comes a day after the Congress-Janata Dal-Secular government fell in Karnataka.

Asked if Tripathi and Kol had joined the Congress formally, minister P C Sharma said, "They have supported us. They are with Congress. It doesn't matter whether they became party members or not."

An elated Kamal Nath said his government has proved its majority as the the bill sponsored by it got through with the support of two BJP MLAs.

"The BJP, for last six months, was daily claiming that the Congress government was in minority in MP... in the morning Leader of the Opposition Gopal Bhargava said they will pull down the government in 24 hours if the BJP central leadership wishes so," Nath told reporters.

"Now with the Congress getting a majority on the floor, the BJP has got a befitting reply," he said.

According to sources, the Congress was eyeing two-three more BJP MLAs, one of them a former Congressman.

BJP leader Narottam Mishra said, "the Congress has started the game, we are going to finish it."