'It will be better if the 'family' desists from giving 'advice and guidance' lest it should be seen as a backseat driver which had placed a puppet at the top,' says Amulya Ganguli. Rahul Gandhi, who has never been a common or garden variety politician like other Congressmen, is forcing his party to go through two trials by fire or agnipariksha.

One is for the party to get used to the idea of accountability and the other is for the members to learn to stand on their own feet.

The first test relates to the fact that the Congress, and especially the Nehru-Gandhi dynasty, has tended to casually and insouciantly ignore the idea of being responsible for what happens to the party, especially when it is defeated.

It was true to their character, therefore, that even after the severe and humiliating drubbing of 2014, the top leaders merely offered to resign as a matter of form, knowing full well that their loyal band of courtiers would raise a hue and cry to ask them to stay, which the dynasty dutifully did and then set up a committee under a faithful family retainer to probe the reasons for the defeat.

By breaking away from this dreary, cringe-inducing routine which made a mockery of responsibility, Rahul Gandhi has shown that he is made of a different material when compared with other members of his family.

Now, the courtiers, who resemble the inmates of an orphanage, are at a loss as to what to do.

They never had to decide for themselves, to stand on their own feet, having always been cared for by their lords and masters.

This is the second agnipariksha which the Congress will now have to pass at Rahul's behest.

It is too early to say whether the party will be able to do so, crippled as its ordinary members have been by the reservation of the top posts for the dynasty to which they have no access.

Arguably, the Congress's first response to the absence of a Nehru-Gandhi at the top will be to choose a loyalist who will keep the seat warm for a future incumbent from the family.

But even if the elevation of a non-Gandhi to the president's post is regarded within and outside the party as a cosmetic gesture, the presence of an 'outsider' may well induce new behaviour patterns among the ground level workers, especially if the new president's term proves to be a longish one and if he seen to receive the outgoing president's wholehearted support.

This is not the first time that the Congress is witnessing a change of guard at the top.

In October, 1934, Mahatma Gandhi had resigned from the Congress as he 'had begun to feel', according to the party's official history, that he was 'a big weight weighing down upon Congress... civil disobedience had to be inaugurated by him, withdrawn by him and regulated by him... he was the one person to whom Congress had been looking up for order, to halt or march, to advance or retreat'.

According to the history, 'the retirement of the father... would but strengthen the son, encourage him to take the initiative, fill him with a sense of responsibility and inspire him with hope and courage, the more so when the patriarch is prepared to make his advice and guidance available to the family or the nation whenever necessary'.

In the present case, however, it will be better if the 'family' desists from giving 'advice and guidance' lest it should be seen as a backseat driver which had placed a puppet at the top.

For Rahul's experiment in trying to turn the Congress into a fighting force from being a 'feudal oligarchy', as Rajiv Gandhi said in 1985, 'who thrive... by enmeshing the living body of the Congress in their net of avarice', the family has to let only Rahul be its most visible face to act as he wishes.

Otherwise, the agni will go out. 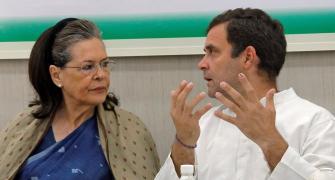