At least 24 people were killed on Monday when two Taliban suicide bombers on foot struck close to the defence ministry in Kabul during late afternoon rush hour, the latest assault on the Afghan capital. IMAGE: Injured policemen are transported at the back of a police vehicle after a suicide attack in Kabul, Afghanistan. Photograph: Mohammad Ismail/Reuters

Around 91 others were wounded in the assault, which comes as the Taliban intensify their nationwide offensive against the US-backed government.

The two bombers blew themselves up in rapid succession, in an attack apparently aimed at inflicting mass casualties as government workers left the ministry after work.

"The first explosion occurred on a bridge near the defence ministry. When soldiers, policemen and civilians rushed to the scene, there was the second explosion," defence ministry spokesman Mohammad Radmanish told media.

Health ministry said 24 people were killed in the blasts.

The Italian-run Emergency Hospital in Kabul tweeted that it had so far received 10 injured people, with more expected to arrive. "The enemies of Afghanistan are losing the fight in the ground battle with security forces," Ghani said in a statement. "That is why they are attacking, highways, cities, mosques, schools and ordinary people."

Taliban spokesman Zabihullah Mujahid said on Twitter that the defence ministry was the object of the first attack, while police were targeted in the second.

The attack took place more than a week after 16 people were killed when militants stormed the AmericanUniversity of Afghanistan in Kabul, in a nearly 10-hour raid that prompted anguished pleas for help from trapped students.

Explosions and gunfire rocked the campus in that attack, which came just weeks after two university professors -- an American and an Australian -- were kidnapped at gunpoint near the school.

Their whereabouts are still unknown and no group so far has publicly claimed responsibility for the abductions, the latest in a series of kidnappings in the conflict-torn country. 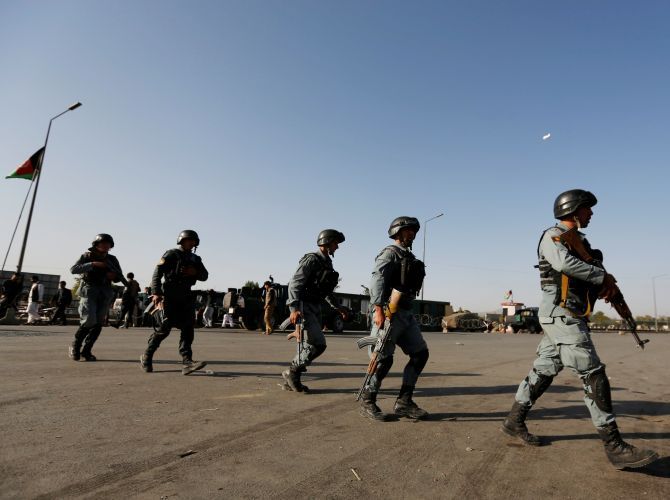 The uptick in violence in the capital comes as the Taliban escalate nationwide attacks, underscoring the worsening security situation since NATO forces ended their combat mission at the end of 2014.

Afghan forces backed by US troops are seeking to head off a potential Taliban takeover of Lashkar Gah, the capital of the southern opium-rich province of Helmand.

The Taliban have also closed in on Kunduz -- the northern city they briefly seized last year in their biggest military victory since the 2001 US invasion -- leaving Afghan forces stretched on multiple fronts.

But NATO coalition forces have insisted that neither Kunduz nor Lashkar Gah are at risk of falling to the insurgents.