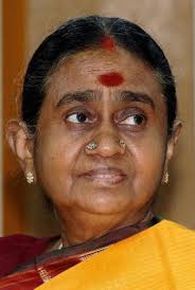 A day after entertaining a plea of former Tamil Nadu Chief Minister M Karunanidhi's wife Dayalu Ammal, a Delhi high court judge on Wednesday recused from hearing her petition challenging a trial court order dismissing her plea for exemption from appearing as a witness in the 2G case.

Justice Veena Birbal, who on Tuesday had observed that the petition was to stall the proceedings, on Wednesday refused to hear Ammal's petition without citing any reason.

"I cannot hear the matter. It has to be listed before another bench," Justice Birbal said and referred the plea to the judge in-charge of criminal cases.

Ammal's counsel, however, sought an early date and the court fixed the matter for Thursday before a different bench.

Ammal has been made a prosecution witness in the 2G case and the trial court has summoned her to appear before it on July 8 for recording of her deposition.

Challenging the trial court's May 31 order, 82-year-old Ammal in her plea has sought the court to pass an order for constitution of a medical board which would then furnish a report on her fitness to appear in the court.

Senior advocate Sudhir Nandrajog, appearing for Ammal, had Tuesday submitted that she was diagnosed with cognitive and behavioural abnormalities in June last year and that she is progressively and gradually losing recognition of even her near and dear ones.

He had said due to her physical and mental condition, Ammal is prone to "abrasive behaviour, clumsy habit with sudden hitting or punching people, inappropriate talk and action and inability to take care of day-to-day activities".

He had submitted that the bench should seek a report from the medical board and if it gives a fitness report, his client has no objection in appearing as witness in the trial court.

The bench had suggested that why doesn't Ammal get herself examined from a government hospital and produce a report before the court.

It had asked her to appear before the trial court and in case she does not understand the questionnaires of the judge, she make a submission before trial court for such an order.

The bench had deferred the plea for today and had asked the counsel to argue on the aspect of its maintainability after CBI's counsel Sonia Mathur submitted that the Supreme Court has already put a blanket ban on the high court to entertain any plea in the 2G case.

The court had asked the CBI to explain under what circumstances and in which plea of CBI the apex court had passed this order.

The trial court had on May 31 dismissed Ammal's exemption plea, saying she is an "important witness" as she was a director in Kalaignar TV Pvt Ltd in which an alleged bribe amount of Rs 200 crore was received.

Ammal had approached the trial court seeking exemption from personal appearance as a witness and to dispense with her presence in the case citing her ailments.

The trial court's order assumed significance as Karunanidhi's daughter and DMK MP Kanimozhi and Sharad Kumar, Managing Director of the TV channel, is facing trial in the case along with former Telecom Minister A Raja, DB Realty Ltd MD Vinod Goenka and others.

The CBI has, in its chargesheet, discussed the routing of over Rs 200 crore illegal gratification from M/S Dynamix Realty to Kalaignar TV Pvt Ltd through M/S Kusegaon Fruits and Vegetables Pvt Ltd and Cineyug Films Pvt Ltd.